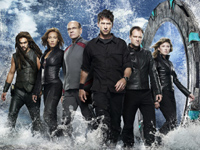 UPDATE: TVShowsOnDVD reports that the suggested price for the Season Five DVD set will be $49.95 U.S. ($69.98 Canadian), not $69.98 U.S. as previously reported. They’ve also published the titles of four bonus featurettes. The story below has been updated!

The final season of Stargate Atlantis finally has a release date. TVShowsOnDVD.com reports that The Complete Fifth Season will be available on DVD in North America on June 30.

The 5-disc set will include all 20 episodes from the last year of the show, plus all the top-notch bonus featurettes and audio commentaries that Stargate fans have come to expect. Among those are deleted scenes, according to the site. But don’t hold out for another blooper reel this year; executive producer Joseph Mallozzi recently told fans that the Season Five set won’t have one.

Among the featurettes is “Tricks of the Trade: Submerging the Stargate,” “Dr. Jackson Comes to Atlantis,” “Stargate Atlantis Goes to Vegas,” and “Inside the Stargate Costume Department.”

Meanwhile, MGM and FOX are also prepping Atlantis‘s first (and hopefully not last!) Blu-ray high definition release. The Fans’ Choice set will be out some time this summer. The studio is currently hosting a contest allowing fans to design and vote on the cover art — so head over to SGAFansChoice.com and get busy!

The Blu-ray release will include an extended version of the 2-part series premiere, “Rising,” and the series finale, “Enemy At the Gate.”

Head over to TVShowsOnDVD.com for the original report, and stay tuned to GateWorld for more on these and other 2009 DVD releases as info becomes available! We’re also still waiting for news on the special edition re-release of SG-1‘s “Children of the Gods” (story), plus a complete series boxed set for Stargate Atlantis.

this will probably be out in September for Australians

What do you mean when you said extended version of ‘Rising’. Is there an even longer version that we havent seen yet?

Yeah september is the usual release for aussies even if it means we get it 6 months before americans.

Why the price increase from $45 to $70? Was there any justification for that?

Cool, I hope that in the summer, season 5 is here also on dvd.(The Netherlands). Hopefully for max. 40-45 euro, like the other seasons.

Hope Australia gets it not too long after, my season 4 dvds won’t survive if I can’t get another season soon…lol

Thats a bit of an increase, I usually import them from the States to the UK, glad I bought them on iTunes for 28 quid.

I cant wait for them to hit the aussie shops im gonna buy it soon as it hits, i dont care about the price i want it so bad because i cant get ep15 anywhere.

Sweet can’t wait to have the entire series on DVD. As for the price, places like Costco or Walmart are likely to have it on deep discount right at the release time.

I assume TPTB want to gouge every bit of money they can out of those of us who won’t be purchasing anything else relating to SGA. Thus the ridiculous price of $70.00.

WTF??? 69.95 has to be a HUGE misquote. I paid double the price for the complete sg1 series FCOL!! Blue Ray I could understand but standard dvd box set…Oh i’m sorry i forgot to assume the position and my correct response should have been “Please sir! May I have another?!?!”

TVShowsOnDVD has updated the report. Turns out the $70 price tag was the Canadian price, not USD. Phew!

Announcement !!!! I’m sure all you exec people who live above the clouds or in a thinner athmosphere (keep your tanks full boys) or maybe ‘on a planet far, far away’ …don’t know we are going through (thru) a recession right now!. NO???? Ok let me explain by way of an example. If you buy a house worth 500K or dollars or whatever (Thai baht if you like,..but then you’d only own 1/10 of a house or something)..never mind. Anyway,…. you own this house and you insure it for 500 dollars a year. In a recession it’s value will have… Read more »

Aussie people, I looked around and found http://www.ezydvd.com.au/item.zml/805629 . The webpage says that Atlantis season 5 is available Wednesday July 29 2009. Fingers crossed that It doesn’t change in the meantime ;)