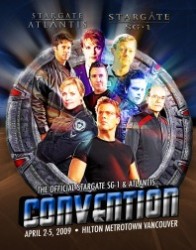 It’s that time of the year again!

This week hundreds of Stargate fans from all over the planet are descending upon beautiful British Columbia, Canada to celebrate their love of all things Stargate by attending Creation Entertainment’s annual (and official) Vancouver convention. GateWorld will be there with special coverage each day!

This year’s convention will be held April 2-5 at the Hilton Metrotown in Burnaby, and will feature many actors from both Stargate television series — thanks in large part to the fact that the convention is held in the city where SG-1 and Atlantis (and now Universe) were filmed.

The convention kick off on Thursday with activities in the main auditorium, followed later that evening by a comedy stage performance entitled “Starhole SG-1.5,” featuring Gary Jones (“Sgt. Walter Harriman” in Stargate SG-1 and Atlantis) and Dean Haglund (The X-Files, The Lone Gunmen).

Picardo and Trinneer will also return to make their stage appearances on Saturday. Joining them on Saturday are fellow Atlantis actors Joe Flanigan (“Lt. Col. John Sheppard”) and Paul McGillion (“Dr. Carson Beckett”). Creation will also hold Stargate set tours on Saturday morning – but sorry, the set of Stargate Universe is closed to fans this year. The day will cap off with a dessert party at night’s end featuring some celebrity guests.

It all leads up to Sunday, featuring visits from executive producers Brad Wright and Robert C. Cooper (who will hold an SGU panel), along with SG-1 actors Michael Shanks (“Daniel Jackson”) and Amanda Tapping (“Samantha Carter”). The convention will be Tapping’s first with Creation Entertainment in almost four years.

Can’t make it to Vancouver this year? Then keep your browser locked on GateWorld in the days ahead! Our entire editorial staff will be making the trip to bring you the latest news and features from the convention, on-site and as it happens! We’ll also have daily photo galleries from our front-row photographers (thanks, gals), and we’ll be sure to bring you any breaking news from our annual trip to The Bridge Studios.

On Wednesday GateWorld will visit the set of Sanctuary for a visit with some old friends … and new interviews!

Don’t miss our full coverage of Vancouver 2009 starting on Wednesday, and follow the action in excruciating detail by watching GateWorld’s new Twitter account. Then tune in to next week’s podcast for a very special episode, (almost) live from the convention!

Oh man, wish I could go. I wonder if they give out all sorts of cool merchandise like at blizzcon.

I sooooooooo wish I could go.
The Starhole SG1.5 sounds amazing I love Gary Jones, the only way it could be better is if Peter DElese was in it.

I wish I knew about this Vancouver convention, last Monday was the first time that I hear about it. I never been in a convention and I will like to go to Vancouver again, is a beautiful city.

I so wish I could be there. :( but to everyone who will be there, have a wonderful time! :D

well, even if the article says everything is “leading up to” Sunday and the SG1 stars that will be on stage then, I personally think the highlight of the Con will be Saturday and the FABULOUS Atlantis guest list that will be here. ;)Glad to be here to see *all* the guests.

I’d like to go next year. Vancouver sounds like a beautiful city – and a Stargate con too. Who could resists. Unfortunately I live in the Delta quadrant… sorry Pegasus galaxy (Sweden) and no access to a Stargate, but I’ll do my best. Would love to meet fellow Stargate fans!