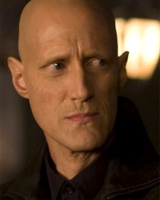 Stargate SG-1 and Atlantis actor Christopher Heyerdahl has been cast in The Twilight Saga: New Moon, the upcoming fantasy film based on the second book in Stephanie Meyer’s popular vampire series.

Standing at 6-foot-4-inches, Heyerdahl will play Marcus, an evil vampire and head of the Volturi.

He’s best known to Stargate fans as Todd the Wraith, though the Vancouver-based actor has also played the Athosian Halling, and Pallan in the SG-1 seventh season episode “Revisions.”

Heyerdahl currently stars alongside Amanda Tapping in SCI FI’s Sanctuary. Season Two of the fantasy series premieres this fall, and is expected air alongside Stargate Universe.

Other Stargate alumni in the second Twilight movie include Cameron Bright, who played the young Orlin in the SG-1 two-parter “The Fourth Horseman.” He’ll play Alec in the film. Also watch for “Young Jack” actor Michael Welch (“Fragile Balance”).

New Moon is now in production, and hits theaters on November 20.

(Thanks to Marianne, Ky and Caitlin for the tip!)

YES!!! When I found this out I was SOOOOO excited. Its funny, because I can easily see Chris playing Marcus. He fits the character perfectly.

He will be soooo good!
Brilliant actor!

He is a great actor! It’s unfortunate the first Twilight movie was brain-numbingly boring… Because I wont be watching any of the sequels

=/ I sent an email about this last week. T_T

YEEEEES! They’re actually casting some of the people right! Now lets hope they don’t make it as choppy as the first…. I can’t wait to see him and Michael Sheen working together, that’s going to be brilliant!

I’ve never read Twilight, nor have I seen the first movie (I’m a guy, dunno if they are too chick-flicky for me). But I might have to see this one. I’ve been thinking Christopher would do great as a vampire (speculating mainly on him playing Alucard if they did a Hellsing movie).

NO! NO! NO! NOOOOO! Twilight is the devil incarnate people!! its evviilll, its corrupting smart people all over the globe with dumb nonsense about sparkly vampires and lack of common sense, seriously why waste such talent as him on twilight? why? Oh and for the record, REAL vampires dont sparkle, they have platinum dyed blonde hair and wear leather jackets and they yell ‘bloody hell’ all the time! Sparkling vampires? pfft, its the most retarded thing ever.

@jeffala because Marcus is a Vampire, yes he can sparkle, but the Volturi stay underground for the most part. So it isn’t likely that you will actually see him sparkle. (Kind of an odd mental picture isn’t it?) @Aaronjw I suggest you check out Twilightguy and see if they are to “Girly” for you. @lalala Not all Twilight vampires are LL glittery and “crap” only the Cullens are. In fact, the vampire that Chris is playing is a “Typical vampire” because he is a Volturi. In fact, if you are someone who has read the books (Specifically you have to… Read more »

I’m both happy and sad about this- and about the casting of Cameron Bright, Michael Sheen, Dakota Fanning and Graham Greene in the movie in question. On the one hand, I adore all five (especially Graham Greene- much love for Mr. Crabby Tree!) and I’m glad to see them getting work- especially in such a high-profile movie- but on the other hand, Twilight and anything to do with it triggers my gag reflex, so… yeah, I’m not crazy about this. Congrats to the actors involved- I hope that this movie yields bigger opportunities. But there is no way in hell… Read more »

Mana – like you, I was gonna say…hey this is old news already. Dang. How did I know this back then???
It’s great news btw…daughter is excited but no way near as excited as her mum!!! :D
I still have yet to watch the first movie with Micheal Welch (mini Jack O’Neill) in it. Who btw is coming to the Armageddon Expo in Melbourne in October!!!

NOOOO, don’t ruin your career you have so much potential.

@Aaronjw: dont watch! Im a chick and I wanted to smash my brains in half way through… it was aimed at below average teenagers…. holy cow. I am still trying to scrub that movie from my brain

Hahaha, that’s too bad. Heyerdahl is way too good an actor for something as awful as Twilight.

@junebug I am not a below average teenager thank you very much. I’ve skipped two grades.

*Glowers at all the anti-twilighters*

I have to admit, I wasn’t a fan at all. But I was curious why thousands of adolescent girls were screaming their lungs out over this crap. I broke down and watch the movie with absolute bias..hating parts, but, found myself intrigued, I kinda liked the story. Knowing that books are always better, I sat down and read them…I found myself engrossed in the plot.crap. I liked it. Not a bad story. Not at all. My point is… Those of you ant-twilighters, I know exactly how you feel. I used to be you. “Oh no! Not another teen movie! NO!… Read more »

Hey, that’s actually pretty cool! I’m not obsessed with Twilight, but I do sorta like it, and I’m very happy “Todd” is going to be in it. :P

As much as I don’t like TL (My sister loves it) I can see him working very well in that. And am happy for him that he is in a big high budget movie. Who knows maybe people will IMDB him because of it and find out about SG1, SGA and Sanctuary, we can only hope.

I saw the first twilight movie and I hated it. The actress who played Bella was so bad I wanted to cry; all the other actors are great. The story is so-so, verging on crap, but at least it shows kids that you don’t have to have sex to be in a relationship.
I’m glad CH has landed a spot in a movie that is bound to be seen by millions. Congrats!

Congrats to Heyerdahl! This has to raise him on Hollywood’s radar!

i watched Twilight.. and it was awful. Dialog was dull and slow and the acting was so so. The main actor looked like he had gas pains the whole time.

One thing that is definite… you do not need much of an IQ to understand that movie.

This is wonderful news. This man deserves to be the lead in his own show. He brings the real goods every time he is on screen.

A little off topic. Christopher Heyerdahl was awesome in Supernaturals “On the Head of a Pin” and should get some sort of award (Oscar or whatever) for his performance in that episode. This can only be a good thing him being in Twilight, (I thought the first one was crap), apparently the second book was heaps better than the first I have been told (and not from a screaming teenage girl either)

I am fan of Twilight, I’m by no means obsessed, I can fine flaws in the book and movie with no problem but I think they were well written, acting, so so. Though I can’t wait to see Christopher Heyerdahl in it I think he would make a great vampire and would really liven the movie up! Yet it kind of ticks me off when people say they hate something when they have never even bothered to read it or watch it, if you don’t want to fine I don’t care, but calling the people who do like it idiots… Read more »

Terrible film, but will look nice on his CV I suppose…

I watched Twilight and actually thought it was a pretty decent movie (this coming from someone who has not read the books). I especially enjoyed picking out the Stargate actors (there will be three of them in New Moon that I can think of – pretty nice). Anyway, I am thrilled that Christopher Heyerdahl got the job, he’s a phenomenal actor and I can definitely see him as a vampire.