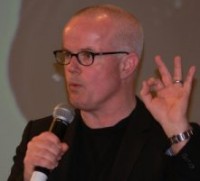 Yesterday, Creation Entertainment’s annual Official Stargate convention in Vancouver kicked off in fine fashion, and GateWorld was there to cover it all!

The day’s festivities kicked off with a visit by Valerie Halverson, lead costume designer for the Stargate franchise since Season Ten of SG-1. During her Q&A session with convention-goers, Halverson spoke of both the joys and challenges in costuming a franchise as diverse in styles as Stargate requires. She specifically mentioned issues such as finding wardrobe options that would conceal actress Rachel Luttrell’s (“Teyla Emmegan“) pregnancy during Season Four of Atlantis — scripts didn’t reflect her condition until she was already over five months pregnant in real life.

She also acknowledged that it was a conscious decision for the main cast of Atlantis to appear in more leather-based attire beginning in Season Four, as a way to make the costumes “more sexy” on-screen.

Next on the stage was a “Working Actor in Vancouver” panel which included Fulvio Cecere, Kirby Morrow, Heather Doerkson, Jody Racicot, Michael Kopsa and Patrick Currie. Fulvio, who has appeared on both Stargate SG-1 and Battlestar Galactica, directly compared the production styles of the two series.

“Stargate is a well-oiled machine,” Fulvio said. “It really is like working with family! It was the same experience on Battlestar, but with them it was more like a feature. With Stargate, we’d shoot eight or more pages in a day, but with Battlestar it might be only three or four. The crew would leave and it would just be us and the director. We’d discuss the shot we needed and thoroughly rehearse it, just like on a movie set.”

The group panel was followed by an appearance by SG-1 actor and fan favorite Gary Jones (“Sgt. Walter Harriman“), who had the crowd in stitches as he discussed a variety of stories from his days on the series. One in-depth recollection involved his first day of shooting scenes with actor Beau Bridges (“General Landry“) at the beginning of Season Nine — and having director Peter DeLuise force him to do his line reads a second time in his best Captain Kirk impression.

As reported previously, Jones also confirmed the news that both he and Richard Dean Anderson will be putting in appearances in episodes of Stargate Universe, set to premiere in the fall.

The evening ended with an improv performance entitled “Starhole SG-1.5,” in which Jones (reprising his role as Harriman) and actor Dean Haglund (The X-Files, The Lone Gunmen) played various Stargate character roles in a brand-new adventure — and several convention guests were invited up to the stage to perform various roles.

The fun and excitement continues tomorrow as the convention will see appearances by David Nykl (“Radek Zelenka“), Dan Shea (“Sgt. Siler,” stunt coordinator for SG-1), Connor Trinneer (“Michael“) and Teryl Rothery (“Dr. Janet Frasier“). Keep your browser locked to GateWorld as we continue to bring you the latest on all things Stargate throughout the convention weekend!

sounds fun wish i was there

Starhole SG-1.5 – wish I could have seen this act.

I’ll bet Fulvio’s comments are really a kick in the groin for the Stargate creators who clearly are doing everything in their power to ripoff Galactica. The Gate creators should realize they have a great product that had such a wide audience b/c it was a PG adventure. Galactica, by every definition was a superior show. However, I loved both for different reasons: Stargate is a fun TV show Galactica transcends television. Stargate will never get to that level and they shouldn’t try lest they destroy the good thing they’ve already got…which is what I fear SGU will do. Just… Read more »

Galactica transcended TV? Yah, if you like being depressed for a week. Its called entertainment for a reason. SG is the superior franchise. Its longevity is unmatched for a reason. Superior acting in both series and cast chemistry. I can count on one hand the amount of times I cracked a smile during Galactica. You dont need to be R rated to “transcend TV”.

I agree ATMD. Stargate was a show that the masses could turn off their brains and enjoy. If you thought too hard about it things started falling apart. They should stick with explosions and aliens and avoid anything deep or philosophical.