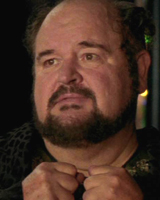 Whether behind the camera or in front of it, members of the DeLuise family have consistently been a part of the Stargate family. Sadly, one of those members is no longer with us.

Veteran actor Dom DeLuise passed away Monday evening in Los Angeles, according to son Michael. The actor had been hospitalized due to kidney failure and respiratory problems. He was 75.

DeLuise had a long career in both television and films. His first appearances in television date back to the mid-sixties, with credits that include The Munsters and The Ghost and Mrs. Muir. In the 1970s, he began working relationships and friendships with several notable people that would continue for decades to come.

Actor, writer, producer and director friend Mel Brooks cast him as “Buddy Bizarre” in 1974’s Blazing Saddles, and the two continued to collaborate over the years in future Brooks films including History of The World Part One, Robin Hood: Men In Tights, and the science fiction parody film Spaceballs. 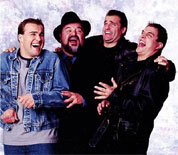 He was also frequent collaborators with and good friends of actor Burt Reynolds and animator Don Bluth, appearing in several films and series with Reynolds including the Smokey and The Bandit and Cannonball Run series, and B.L. Stryker.

His voice work credits with Bluth include the roles of “Tiger” in the An American Tail animated movie and television productions, in addition to other projects with Bluth including The Secret of N.I.M.H. films and the All Dogs Go To Heaven films and animated series. DeLuise’s last voice work collaboration with Reynolds was in a 2005 episode of the Adult Swim series Robot Chicken.

Stargate SG-1 fans, however, will remember DeLuise as the title character in Season Three’s “Urgo,” where he played the fun-loving physical manifestation of an alien probe (and its creator) who wanted to experience life. After being implanted into the brains of the SG-1 team, he subliminally gets the team to show him new experiences while they struggle to get him out of their heads.

But beside this memorable episode, Dom left his greatest mark on the Stargate franchise through his sons. Peter DeLuise served as a director, writer, and producer on Stargate SG-1 and Stargate Atlantis for most of those series’ runs. Son Michael played Nick Marlowe/Colonel Danning in the episode “Wormhole X-Treme!” and son David played Pete Shanahan in several episodes of SG-1.

GateWorld offers our condolences to the entire DeLuise family during this difficult time. Dom is survived by his wife Carol Arthur, sons Michael, Peter and David, as well as three grandchildren.

(Thanks to the many readers who sent this in) 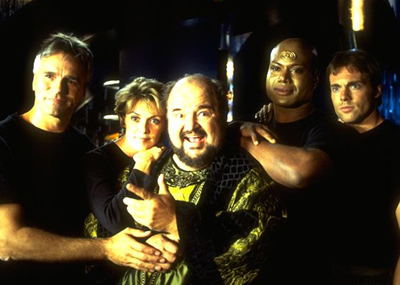 So many condolenses to the Deluise boys and their families. Dom will certainly be missed. RIP, Dom. You gave us so much joy and laughter.

I just had to register to say. OMG!!! This is such sad news for me to be hearing today!!! Dom Deluise in my honest opinion was (boy it’s gonna be hard to get used to that instead of is) one of the funniest men I have ever seen on TV or the big screen! I loved him in every movie I have seen with him in it. He could always bring me to a laugh in a very sly, comical way without even trying. You will be sorely missed Mr. Deluise, but alas you will bring laughter to Heaven now.… Read more »

I also have to add my condolences here for the Deluise family. I have enjoyed Mr. Deluise’s acting and comedy for decades, both in film and on tv, and his talent and personality will be sorely missed all around. Truly one of the greats in the entertainment world.

My condolences to his family and friends and to all of the fans who loved him.

my condondolences to the family and friends of Dom DeLuise, he will remember you as a great man who made us laugh when you played urgo. RIP Dom

’tis a shame. Urgo has always been one of my favourite episodes.

R.I.P. Dom…you were a true comic genius….my condolences to all your family at this very sad time…

With a heavy heart and tears in my eyes! Dom was a wonderful and talented Actor/Chief. My heart goes out to his wife, sons and grandchildren. Urgo was one of my many favorite episodes. Growing up wathcing Dom in movies and then of course Stargate I feel that I have lost a part of my family. All the best to all that knew him.

God Bless and rest your soul. Thanks for the laughter through all my years. God’s greatest gift is laughter and with all my heart I thank you for giving that to me. All the best to the family. You will be remembered.

Such sad news. I was just watching “The Secrets of NIMH” the other day and thinking how perfect Dom’s voice was for Jeremy. Urgo is also one of my favorite episodes. My thoughts go out to his family and friends.

Rest In Peace Dom! You will be remembered. Condolensces to your family and friends.

My condolences and sympathies to the DeLuise family and to the extended Stargate family.

The DeLuise family truly is a critical part of the global Stargate family — I think that’s why this has so many of us empathizing with their family. Though so many of Dom’s roles were fabulous, I’ll always remember him as Urgo.
“I wanna live, I wanna experience the universe, and I wanna eat pie!”

My condondolences to the family. I know that he’s going to live on through the people he loved and who loved him.
If there’s one thing that will remember me of Mr. DeLuise, then it is a smiling face. His smiling face, or mine whenever I saw him on tv. …and now it’s taken away. You’ll be missed.

Huge condondolences to the whole DeLuise family. I am praying the God will be with the family through this time. Urgo is one my favorite favorite episodes. RIP Dom, and thanks for the memorys!!!

I just get home from work, check my RSS feeds, and see this. My heart is saddened, as I loved Dom Deluise in everything I’ve seen him in. My first experience was Smokey and the Bandit 2, where he played the doctor, nursing the elephant. He brought me great joy since then. With my own father not doing so well with cancer, my heart bleeds for Pete, Dave, and Mike. Whichever religion Dom followed, I’m sure he’s in the best part of it’s afterlife.

I saw this morning. Very tragic.

Carol, Peter, Michael and David,
My eyes weep but my heart rejoices in the life, love and humour that Dom brought to us all. He’ll be missed but forever remembered with fondness and a smile.
May God be with you all at this time, may He bring you comfort and peace.
Sincerely,
Denise
Sydney, Australia

RIP Sir. Your comedic talents have kept me laughing so long. Our thoughts are with the whole family! You will bring great joy and laughter to heaven!

RIP Dom. You will be missed by all

After hearing the stunning announcement late yesterday afternoon about the [unexpected] death of one of my most favorite actors and comedians of all time, I couldn’t believe it. It’s till difficult to accept, but when the news first came, I immediately thought about Dom’s three surviving sons (Michael, David, and Peter). My heart goes out to you and your whole family during this most difficult time. I will forever remember your father who made me laugh out loud so many times, over and over, since I first watched Mr. DeLuise in the Mel Brooks classic ‘Blazing Saddles’ at a downtown… Read more »

I was saddened to hear that Urgo had passed. My heart goes out to the family.

I keep tearing up, tho’ I know Dom would want us to be laughing. I only just realized that all 3 sons were somehow in SG-1. I watched Urgo last night after I heard the news. My condolences to all the family. It may be that “In Heaven There is No Beer”, but Dom’s there now, so there sure is laughter.

WOW! I am shocked about this. I remember meeting him once by happenstance in Los Anglees, I didn’t get to speak to him that long. But just the few moments I did speak to him I got the impression of a person who was not only funny, but intelligent, caring and I honestly felt like I was in the presence of greatness. I remember first seeing him in Smokey and the Bandit Part 2 in 1980 and I fell in love with his comedic side. I followed his comedy movies like if it was a religion. Then I saw in… Read more »

My family and I would like to send our sincerest condolences to the DeLuise family on the loss of Dom DeLuise.
Such a wonderful, funny, joyous man, he will be sorely missed. My heart goes out to Dom’s family as it is all too familiar to know what they are going through right now.
Rest in peace Dom.

I am so sorry to hear about Dom DeLuise’s death. He was one of my comic heros. It says so much for him that you could see the humour in the genes of his son Peter in any of the episodes he was associated with. God bless Dom and all his family.

I just learned of the passing of Dom DeLuise. I cried. He reminded me somewhat of my father. He was a great guy. I’ll miss him. Just last night my brother and I were talking about Dom DeLuise: The “Egg Trick”, the “Pasta with eggs and cheese dish”, and “poo cramps!” My condolences and prayers go out to Dom’s family.