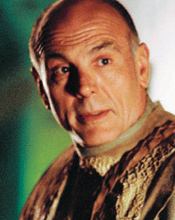 Visit GateWorld every Friday for a new installment of the Friday Five, a countdown of our favorite episodes, characters, technology and more from 15 years of Stargate history. Post a comment below to let us know how your picks compare, or use trackbacks to post your own Friday Five for this week’s topic on your blog!

This Week: The Best of Jacob Carter

Sam’s lovable and emotionally complex father started out as a brusque military general in “Secrets,” set on getting his brilliant daughter into NASA … because he had no idea what she really did for a living. But after he became a host to Selmak and joined the Tok’ra as Earth’s liaison, Jacob softened and opened himself to his daughter in ways he never had. He fought the Goa’uld for six long years before finally dying in a self-sacrificial act in “Reckoning” and “Threads.”

Jacob has always been one of our favorite supporting players, brought to life by the fantastic Carmen Argenziano (interview). This list was tough to narrow down. But without further ado, here are our top five Jacob episodes:

Jacob/Selmak return to Earth to help SG-1 hunt a Goa’uld who the Tok’ra lost track of a couple thousand years ago, learning that he’s set himself up as a cult leader outside of Seattle. It’s always great to see Jacob get hands-on and join the team for a mission — but “Seth” is special because of the insight it offers into the character’s relationship with his estranged son, Mark. Selmak tells Sam that this hidden resentment is beginning to annoy him. So the episode ends with a memorable (if a bit forced) reunion between Jacob and his son.

Talk about getting your hands dirty! After the team captures one of Anubis’s new super-soldiers, Jacob and Sam dissect it and learn just what it is. Then he dons its sleek, black armor to infiltrate the enemy’s secret laboratory. This gets him past Anubis’s gate shield (at great personal risk), and into the facility. Sam, Teal’c and Bra’tac swoop in with a cargo ship to rescue him.

With new intelligence that the most powerful Goa’uld System Lords are getting together for a secret confab, Jacob knows that Daniel is the perfect candidate to be a spy in their midst. He escorts him on a cargo ship, using the memory-altering Reole chemical to trick Lord Yu into believing Daniel is his loyal servant. (Jacob himself, he reports, has spent months establishing himself as a lower Goa’uld in Yu’s service.) He then closely monitors the situation from the cargo ship while Daniel does his work, then comes to his rescue when it’s time for the big escape. And were we the only ones who thought the writers might be killing him off in that crash landing back on Revanna?

Martouf arrives at Stargate Command to inform Samantha and the team that Jacob has been captured by Sokar and sent to hell — the firey moon of Ne’tu. When they track him down he’s in bad shape, beaten and near death, lying in one of Sokar’s dungeons. But he’s gathered vital intelligence about the rogue Goa’uld, who is poised to attack and defeat several key System Lords in a matter of days. In a lot of ways, this two-parter is an elaborate story of Jacob’s rescue.

Bombs away! Jacob takes SG-1 on an extremely risky mission to sabotage a meeting between Apophis and Heru’ur, two Goa’uld who control massive armies. An alliance between them would mean very bad things for the galaxy. They take a cargo ship to the Tobin system, transporting a volatile mine into the cargo hold for Sam and Daniel to reprogram. It’s our favorite because Jacob is in such fine form, with his stern warnings about the mission and his funny, no-nonsense lines — like “of course, Colonel O’Neill is always fun to have around!”

We left out a lot of great Jacob moments, which deserve mention: His unquestioning willingness to come to Jack and Teal’c’s rescue in “Tangent;” his pessimism and strategery stuck in another galaxy with SG-1 in “Enemies;” his work deciphering an Ancient puzzle with Sam in “Reckoning,” and his touching departure in “Threads.” The fact that there are so many great moments for the character shows that Jacob Carter truly is one of Stargate‘s best.

Tune in next week for another Friday Five! If you have an idea for a future installment, e-mail us and let us know.

NEXT WEEK ON THE FIVE: Five great attacks on the planet Earth!

Jacob was also great in Enemies and Exodus. Well…every episode he was in. :)

It was Revanna, not Vorash…

The comedic interation between Jacob and Daniel in Tangent is more memborable to me. The look on Carmen Argenziano’s face was priceless when Daniel told him how he’d identified himself to Heru-ur’s ships.

I loved the comic relation between Daniel and Jacob in Tangent too!! But I think the ep that I love most with Jacob is Summit/Last Stand. Then Tok’ra, Threads, Serpents Venom and Jolinars Memories.

Yeah i would have gone for threads as my #1, but a fantastic list nonetheless

i love jacob when he goes mad or looks more series to Oniel especially when Ball wanted help running from the replicators and oniel trying to piss him off cause he wanted help and GODS dont require help hhh any way i found it funny how jacob responded i miss him ….

I can’t BELIEVE this wasn’t mentioned: “We’re not gonna make it!”