Stargate Atlantis‘s first Blu-ray release is headed to stores in North America on August 4, and today TVShowsOnDVD.com unveiled the official box art from MGM and Fox Home Entertainment. Stargate Atlantis – Fans’ Choice will include expanded, high-definition versions of the show’s first and last episodes, “Rising” (Parts 1 and 2) and “Enemy At the Gate.”

The cover art was designed by a fan of the show and voted on at SGAFansChoice.com. 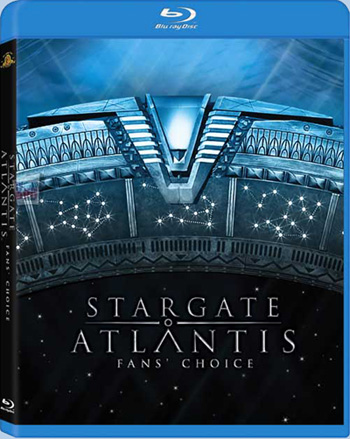 There is no news yet on additional high-def releases for Atlantis or Stargate SG-1, but if the Fans’ Choice release does well, cross your fingers and hope for more.

Check out the original report (and a larger image) at TVShowsOnDVD.com! Pre-order the Fans’ Choice Blu-ray at Amazon.com, and support GateWorld with your purchase.

It’s a cool cover, but I wanted one with the actors on it… ah well, such is life.
And it’s really blue, guess it fits.

Ugh, just put the seasons on bluray already? We know its going to come out eventually, and we don’t want to have to double dip :(

wait,
is there any other eps on this besides Rising and EATG?

When season 5 of Atlantis comes out, will it have the expanded EATG episode too? Or do we have to buy the fan’s choice to get it? Anyone know?

Its nice they made this cover that is made by a fan, but I had hoped to see te cast on it. I mean they are doing the series ther in it. A bit sour for the cast I think. Blue Ray its coming I know and it takes over. I dont intend to buy Blue Ray.I do hope the usual DVD Box is on the market then as well.

*yawn* I think this is just another way to soak more money out of it, unfortunatly.

@Shawn: The DVD release for Season 5 will have expanded versions of “Vegas” and “EATG.” I would imagine that that’s the same version of the episode as this Blu-ray release.

Thanks Darren, guess I’ll prob wait for that then. I like the cover cos I love blue and it fits in with the whole ‘Blu-ray’ thing, but blue is more of an SG1 thing, they should’ve made the cover green for Atlantis!

I recognize the futility of what I’m about to say, but, 1) The cover rocks by any SG cover standard. There’s no stupid cgi splashes and plastic photoshopped looking actors. Clean and simple and, 2) Green is not the color most closely associated with SGA. Blue is.

What is with you guys…

Atlantis’ wormholes are green, SG1’s are blue. Therefore in my opinion green is more closely associated with Atlantis than blue since the Stargate is the whole focal point of the shows ( as suggested by the title… ) and the wormholes are kinda what makes the stargates useful…

Atlantis = blue to me. The chevrons and the ocean being two of the most striking images from the series, both blue. To suggest that Atlantis is associated with the colour green is laughable. They started using the same green wormholes on SG-1, you shouldn’t put so much importance on it.

i cant wait until season 5 comes out so i can add it to my collections.