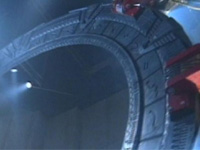 With the Stargate SG-1 Complete Series features behind us we now move back in time to the very first adventure that started it all — the original theatrical film!

Monday, June 22 features additions from the Stargate Ultimate Edition DVD set to the GateWorld Gallery. To our surprise in dusting off this two-disc set from our shelves, there are only two original documentaries featured within, and one only slightly has to do with Stargate itself. Still, in “completest” spirit, we present both to you in our DVD screencaps section.

Here is the lowdown on this week’s goodies …

Is There a Stargate? (148 images) – Erich Von Daniken, author of Chariots of the Gods, and Giorgio Tsoukalos, editor in chief of Legendary Times, offer up evidence that convinces them aliens have visited Earth and have had an impact on its cultures.

Join us next Monday when we tackle Season One of Stargate SG-1 on DVD!