Beware of very minor SPOILERS for the Stargate Universe premiere in this report.

Is it October yet? We’re anxiously awaiting the premiere of Stargate Universe, and eager for the tiniest morsel of information about the new series.

Today the first official episode photo has hit the Web, courtesy of Wired.com (and their article on today’s SCI FI Channel rebranding).  Click on the image to see a bigger version: 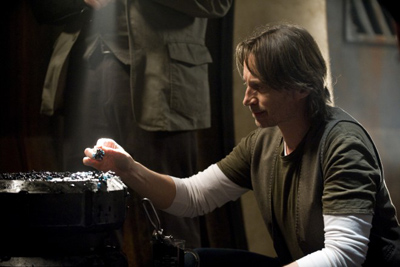 The photo shows Robert Carlyle as Dr. Nicholas Rush, who is examining some black goup found on board the Destiny. Based on previous intel, it is probably from the 3-part series premiere, “Air.”

We’re expecting many, many more episode photos from the set of SGU in the weeks ahead, so stay tuned!  Syfy has not officially announced the premiere date yet, but good money is on Friday, October 2.

oh cool! what could it be?
i cant wait til the premier