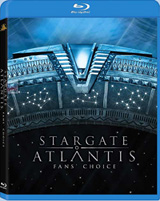 Stargate Atlantis Fans’ Choice is coming to Blu-ray high definition in just a few weeks (August 4). But don’t hold your breath for more.

MGM and Fox Home Entertainment today released the official announcement for the Fans’ Choice release, which includes extended versions of the first (two-part) episode and the last episode of the series, “Rising” and “Enemy At the Gate.” But they also had this to say:

When the studio first announced the Blu-ray release, we speculated that it may be a way to “test the waters” of the new format, to determine if it would sell well enough to release full seasons of the Stargate series in high-def (particularly when much of the show’s core audience already own the episodes on standard DVD). If MGM and Fox have already decided not to do full-season releases, that seems not to be the case.

The reasoning behind this decision is not known.   While remastering older material can be a costly and time-consuming endeavor (such as with Paramount’s high-def releases of the 1960s Star Trek series), Atlantis was filmed using high-definition digital cameras from the first episode.

One factor may be the DVD market itself, where sales have has dwindled following the big “TV on DVD” boom of several years ago, as well as the faltering economy.  The relative weakness of the current DVD market has been cited as a chief reason why MGM has not yet put the next SG-1 and Atlantis movies into active production, despite the strong sales of The Ark of Truth and Continuum in 2008.

Blu-ray titles made up 12 percent of sales in June (88 percent for DVD), according to Blu-rayStats.com.

The year 2017, of course, gives the studio a lot of time to change its mind, depending on the overall success of TV on Blu-ray.

In the meantime, don’t miss the August 4 release of Stargate Atlantis: Fans’ Choice! The episodes and cover art were voted on by fans, and the cover designed by a fan (and GateWorld Forum member!), as well. The disc will sell for a suggested price of $29.99 U.S. ($32.99 Canada). No bonus features are listed. Pre-order it now at Amazon.com and support GateWorld.

Well if this is a test its a bad one. I would by seasons but I wont buy a best of and/or volume. If I can’t have it all I don’t want it. I would rather have SG-1 on blu-ray. I wanna watch the entire show again but I’m afraid as soon as I dust off my DVDs they will release a blu-ray.

Ditto. Holding out for the entire SG-1 series on blu-ray.

Hey, I ended up with 3 copies of BSG: Razor. Bought one from America (didn’t work), bought one in Australia (worked) then they released it in the Season 4 again. If I had the chance, yeah, I’d buy the blu-ray series of SGA if released later.

Does this mean they are only producing this one disc, with 2 episodes? or will they continue and put all the Fan’s Choice episodes on discs as part of the collection? I’m confused…

It’s a bad decision I think. I think all seasons are available from not so legal sources on the internet. Why drive people from paying for your product into finding the only alternative? I’m think they are just saying this so people buy the bluray disc. If they tell people now that boxsets are coming, no one will buy the bluray disc thats coming out in a few weeks. Kind of like how game console companies deny price cuts until they say they make them. I’ve never bought atlantis because I knew it was all filmed in HD, whats the… Read more »

They need to put a bunch of extra stuff on the discs and series sets. I would love to have all the screensavers from the show like the apollo and daedalus screensaver on each ship. and maps and etc of them and atlantis. And extended versions. and be able to copy the plans and screensavers onto personal computers to use it all on there. I don’t care how much it would cost, if it had all of that,…IT WOULD BE MINE lol It’s not just the episodes etc that we the fans buy stuff for,…it’s all the extras that us… Read more »

even if lets say,… i was able to, and got them off the net, well, even if i did have lets say the whole season 5 that way, Now, when the season set comes out, i’m still gonna buy it. I collect all the stargate stuff that i can but, all the extras that you get on the sets is half the reason to buy a season set. Even if when it comes out i can’t afford it, It would be mine by my next paycheck etc lol.

Would buy it if they released it on HD-DVD. But never blu-ray, the format is just garbage!

I think you may be reading too much into this. While it’s disappointing that they aren’t coming soon, it’s not like they’ve said they’ll never release it; just that it’s not something they’re already planning and scheduling.

Great, I was holding off the complete re-watching of the series because of waiting for Blurays. Well, guess I shouldn’t wait any longer cause I might as well be already dead when you release it, MGM. It’s funny how some years and months ago, Stargate Atlantis was supposed to be the first series on Bluray. (here for a refreshment of memory: https://www.gateworld.net/news/2006/01/iatlantisi_among_sonys_first_blu.shtml ) Well, if you don’t want to release it MGM, feel free to eat it and choke on it. A lot of other series/studios don’t have a problem with releasing TV on Bluray… If its the only thing… Read more »

All I buy is blu now. If this is all they are going to release on blu, I’m not going to bother.

If they would put SG1 and SGA both on blu-ray I would definitely buy.

MGM deserves to lose money if this is all they’re going to do.

Also in Europe a lot of people are waiting for the BD version. It is again that they are looking to America and not to other country’s. If they also check the other country’s the numbers perhaps get lower but they will see a more buyers and fans are there to get it.

I was hoping for a BD version of all Atlantis seasons… and being in the UK the Fan’s choice disc has not got a release date either.

Same here, I own all of SG-1 and Atlantis on DVD and looking forward to buying them all on Blu-ray. While I would like to get the Fan’s Choice set I really hate the idea of buying these and then 6 months down the road or something they release the whole series and I’m stuck double paying.

This is so wrong, even Dollhouse is coming out on Blu Ray an thats a bad show, so why not SGA, some of us want this version, its so not fair but sadly its what we have come to expect from PTB.