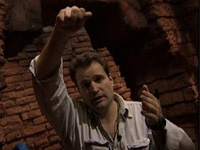 The groundbreaking and controversial year for the series featured a handful of DVD special features that gave fans an up-close and personal look into the lives of the cast and crew like never before.

This time the actors were given video cameras by MGM and instructed to film their average, or not-so-average, days at work. Additionally, Peter DeLuise gives a tour of a brand new set.

Over 1,000 screen captures from this season have been uploaded for your use and enjoyment, and are detailed below!

Inside The Tomb (159 images) – Director Peter DeLuise gives a guided tour through the tomb set from Season Five’s “The Tomb,” built within the Goa’uld mothership sets.

Video Diary: Christopher Judge (225 images) – Judge takes fans through a typical day of work on “The Warrior,” a highlight episode for the actor.