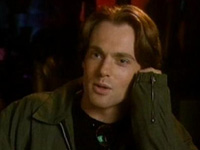 Only three new features are in this week’s selection, but the early seasons of the show on DVD did not always include that many items. Either way, their screenshots are available to you now!

Production Design Featurette (40 images) – SG-1 Production Designer Richard Hudolin talks about transferring Stargate from the silver screen to the television in this featurette.

Profile on Dr. Jackson (92 images) – Michael Shanks comes aboard as Dr. Daniel Jackson, originally played by James Spader in the feature film, and talks about the challenges the role presents.

Profile on Teal’c (47 images) – Christopher Judge sits down to talk about the stoic Jaffa warrior-turned-traiter Teal’c in this featurette.

Stay with GateWorld for Seasons Three and Four of Stargate SG-1 to join the GateWorld Gallery next Monday!