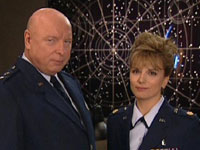 It’s a double dose of Seasons this week for the GateWorld Gallery! Because Seasons Three and Four of SG-1 on Region 1 DVD contains a total of five bonus features, we decided we’d save everybody time and publish them simultaneously.

Seasons Three and Four included something very special for fans, as hosts Don S. Davis and Teryl Rothery reprise their roles as General Hammond and Dr. Fraiser in intro and outtro sketches with each feature.

Below is a breakdown for each segment.

Stay with us next week when we add special features screenshots from Season Five of SG-1 to the GateWorld Gallery!