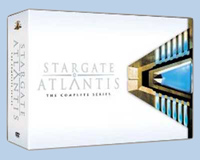 TVShowsOnDVD.com has published the first look at Stargate Atlantis: The Complete Series!  The big box featuring all five seasons and 100 episodes is coming to DVD on October 6, according to the pre-order listing now up at Amazon.com

Amazon currently lists the suggested retail price at $259.98 U.S., with a 35 percent discount for pre-orders (subject to change — but if you pre-order, you lock in that price).

MGM and Fox Home Entertainment won’t officially announce the specs on this set for a few more weeks, but we expect it to include the same discs and the same bonus features as the individual seasons.  While the packaging itself could be considered a collector’s item, there is no news yet on whether it will include any additional bonus material.

Stargate SG-1‘s complete series included four extra discs of bonus material, though this was all material that had already been produced and released elsewhere — such as Region 2 releases of each season, and several specials that aired on SCI FI Channel.

Head over to TVShowsOnDVD.com to see the original report, and stay tuned to GateWorld this summer for more info as it becomes available. Stargate Atlantis: The Complete Series can be ordered now at Amazon.com.

(Thanks to SGAsgard, Joseph, Joel and wesstargatefan for the tip)

if I didn’t already have all the seasons on DVD, I’d probably buy it. It would have to have significant extras for me to spend that much $$.
Doesn’t it kind of look like a kitchen appliance, though?

I’d be highly surprised if that was the actual price when it is released. They are giving a discount for pre-orders but when that comes out on shelves it will not be for $259.98 regardless of the “suggested retail price.”

I personally won’t be buying it as I already have all the seasons individually. I’ll wait a few years until they come out with something else later on. Wouldn’t be surprised to see a joint SG-1 and SGA package.

Yeah, that is a pretty ridiculous price. I mean, catch a decent sale today and you could pick up all 5 seasons for about $100. Hell, we sometimes see the SG-1 series set going for $100.

I picked up the SG1 complete set for $120 at Costco a while back… I think I’m probably waiting for this on Blu-Ray anyways.

link to the uk cover. i like the american one better

Just recieved our copy of Stargate Atlantis season five from the States, and watched it all over the past few days, and seeing the final Enermy at the Gate, A kick ass ending. Great to see McKay got some balls now.

Season five has not aired on New Zealand TV and I’m not to sure if it will, so it’s been a patient time for it to come out on DVD. Look forword to the first Stargate Atlantis movie and the 3rd Stargate SG1 movie “in need”. Can’t wait for Stargate Universe to come out on DVD.

Put it on Blu-ray and I’ll buy it.