This spring we told you about Coveroo, a company that is now offering officially licensed, Stargate-themed cover plates for your cell phone, iPod, or other mobile device (story).  In the months since they’ve expanded their Stargate offerings, revamped their Web site, and sent us a couple of Coveroos to check out!

A Coveroo replaces the battery cover on most major cell phone brands, giving your phone a custom feel that shows off your love of Stargate.  I’ve never purchased any sort of cell phone accessory or customization, but I quickly found that this one was fun to carry around.  Showing it off to friends has a definite “wow” factor.

There seem to be two different kinds of Coveroo designs:  laser-etched, or full-color.  I saw one of each.  My Blackberry Curve Titanium is currently decked-out with a laser-etched Stargate, detailed with all nine chevrons and 39 symbols.  The image resolution is moderate, enough to easily make out the tiny symbols on the gate’s inner track. It looks great, and the texture adds to the effect.  The total package gives a high-quality impression — subtle and fun.

Most of the full-color designs, however, are anything but subtle.  A bright, full-color design on the back of a grey or black cell phone screams “look at me,” and it’s just not my speed.  The design we saw (Sam Carter with a quote from “Children of the Gods,” “Are we going to have to arm wrestle?”) is also missing the textured feel.  In fact, it feels like a sticker stuck onto the phone.

There are currently over 40 different Stargate designs available, including Stargates, the D.H.D. face, various System Lord symbols, ships, weapons, a M.A.L.P., cast shots, and more.  Since the full-cover Coveroo we received isn’t even on the site yet, expect more to be added in the future. 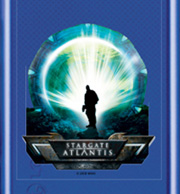 That odd character quote on the Sam Carter image, as well as a few strange, non-Stargate looking choices on the site now, also leave us feeling like some of these designs were created or selected by someone who doesn’t know the shows very well.  But there are plenty of cool choices to make up for it, including the Stargate, a Goa’uld cargo ship, a Death Glider, a zat gun, and SG-1 or S.G.C. patches (pictured above).

Coveroos range from around $10 to $40, depending on your cell phone model.  ($19.95 is typical, such as for my Blackberry.)  The lower end of this range seems like a bargain, but you really have to be devoted to Stargate and to cell phone customization to be willing to pay much more than $20 for a cool plastic cover.

Depending on the size of your battery cover and the free space available around things like a manufacturer’s logo (such as on some Motorola phones, for example), the custom design may also end up rather small.

If the sticker price doesn’t throw you and you see a design that you like, a Coveroo is a great way to add a little Stargate to your daily routine.  The simpler, laser-etched designs we can highly recommend; with a full-color design, be careful that your fashion statement is not overstated.

Check out all the Stargate Coveroo options at Coveroo.com, and see if your phone model is available!

yeah these are cool . i’ve know about them for a couple months now though. they were posted on the DVICE.com site a while back. you can also do xfiles and startrek and comics and others as well. to bad i just don’t have the money at the moment to do it. sniff sniff