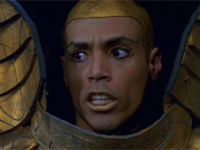 This week the GateWorld Gallery is taking a break from updating the Special Features screen captures section and instead is going  back in time to the very beginning.

“Children of the Gods: Final Cut” is Executive Producer Brad Wright’s definitive vision for the pilot episode of SG-1.

This new version incorporates higher video and audio fidelity, new and retooled visual effects, and no nudity, and is designed for die-hard fans as well as families wanting to get into the show.

“Children of the Gods” arrived on DVD July 21, 2009. We wanted to wait a while to give mainstream fans who normally visit GateWorld a chance to buy the DVD before adding our whopping 4,000-plus images to the Gallery. They have now been installed and are at your disposal!

Visit this gallery now, and we’ll see you next week for SG-1 Season Seven special features!