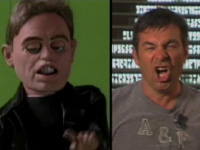 Stargate SG-1‘s series-spanning special features screen capture galleries are now complete with Season Ten! This is the year the Ori became a greater threat, and SG-1 welcomed a fifth team member to their ranks.

This collection of special features includes a look behind the 200th episode of the show, various segments of deleted scenes (a first for the Stargate DVDs), a satirical look at Gary Jones (Walter Harriman), and a very special segment with Jim Menard! Plus the directors series special features we have coveted each year.

Let’s dial it up!

Stay with us as we bring you the (so far) final chapter in SG-1’s journeys through the lens of special features, in Ark of Truth and Continuum, this coming week!