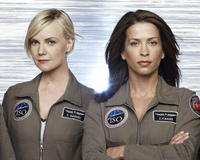 The best summer show you might be missing is Defying Gravity, a new science fiction drama on ABC.  The alphabet network has quietly put the 13-episode series on Sunday nights at 10 p.m., but failed to do much in the way of advertising.

Set less than 50 years in the future, the show tells the story of the Antares and its crew on a 6-year mission to visit seven planets in our solar system, starting with Venus.  The show stars Ron Livingston (Office Space), who nails the unassuming but troubled American hero, Maddux Donner.

Christina Cox co-stars as biologist Jen Crane.  Stargate fans most recently saw her in the Stargate Atlantis episode “Whispers,” as Major Teldy, the leader of the all-woman SG team.  Before that she was the alien T’akaya in SG-1‘s “Spirits,” and Lieutenant Kershaw in “The Sentinel.”

Laura Harris plays geologist Zoe Barnes on the show.  She played Nola in “The Game,” in Atlantis‘s third season.  (Before that, she starred as Daisy Adair on MGM’s dark comedy Dead Like Me.)

Ty Olsson plays former mission commander Rollie Crane. On Stargate SG-1, he played Colonel Barnes in Season Nine’s “The Fourth Horseman, Part 1” and a Jaffa all the way back in Season Three’s “Point of View.”

Zahf Paroo plays engineer Ajay Sharma. Back in the first season of SG-1, he played a villager named Jamala in the episode “The First Commandment.”

The show was created by James Parriott, who previously worked as a producer on Sons of Anarchy, Ugly Betty and Grey’s Anatomy.

This show is smartly written, beautifully shot, and movingly acted. We think it deserves a look from anyone looking for solid sci-fi drama.

Defying Gravity airs Sunday nights at 10 p.m. on ABC in the United States.  Those interested in checking out the show can also find all six aired episodes on Hulu!

Six episodes in and ABC didnt mention it… well at least it isnt Fox.

Sounds interesting. Unfortunately, I think I heard that the show was suffering in ratings. I could be wrong (I hope so) and it was simply a rumor on the internet.

I found this show on Hulu and caught up with the 3 episodes I had missed and have been watching every Sunday night ever since. Quality show.

I’ve been watching. Its pretty good. I started watching mainly for Christina Cox. Even though she’s a Stargate alum, I’m a fan of hers because of Blood Ties.

I think it’s a great show, but the ratings are really low. The August 30th episode only had 2.5 million viewers (against a rerun of CBS’ Cold Case at 5.4)

I’ve already been watching it and its AUSOME. But think the problem is not enough advertising, I only saw one advertisment before the preview and I havn’t seen any since.

I just watched them on hulu and it looks to be pretty good. It makes no sense to start a new show and not advertise it.

Good show…But. I have an issue with the way they explain the gravity on the ship. There are magnetic fibers in their clothing and other objects but apparently the ladies pony tails are still affected by earths gravity in space. I love the show but that always gets me when I see the pony tails swinging around. Kind of sucks the realism out of the scene.

actually they explain after a few episodes why their hair is affected by gravity Chewi4u, as well as the fact that 2 sections of the ship get their gravity from centrifical force instead of magnetic pull

Love this show, and I wish ABC would do more to promote it. Great characters, interesting stories.

Just to toss in- if you live in Canada and want to see the newest ep, check out CTV at 10pm Fridays instead of Space (CTV airs the episodes a week before Space and two days before ABC).

chewifu – Actually a few episodes back they explained there is a hand held device they use on their hair that uses static or some such and such to keep the hair in place.

I watched it from the beginning and stopped 2 weeks ago. It’s an astronautical soap opera. The Antares is almost identical to the ship in the Movie Sunshine from a few years back. The only reason this show might be considered a “best summer show” is that there’s hardly any other new Sci-Fi on TV these days.

This is NOT Sci-Fi for men or traditional Sci-Fi lovers. It’s a soap opera set in the world of a fictional space program. Entire episodes go by where virtually nothing happens.

Defying Gravity is Sci-Fi for women. They’re on a mission to Venus. Get it? The previous mission was to Mars. [U]Men Are From Mars, Women Are From Venus[/U]. Got it now?

If you want to listen to endless blather about relationships and feelings, then be sure to tune in.

I always thought Christina Cox was one of the sexiest women to appear on SG-1 & Atlantis, but I don’t want Sanctuary for AT and I won’t watch any show just to see a favorite actor.

“Defying Gravity is Sci-Fi for women. They’re on a mission to Venus. Get it? The previous mission was to Mars. [U]Men Are From Mars, Women Are From Venus[/U]. Got it now? If you want to listen to endless blather about relationships and feelings, then be sure to tune in.” @fwupow LOL speaking as a woman, if that sums up the show THANKS but NO THANKS, contrary to popular belief not all woman want to watch that type of show an some of us actually HATE soaps with a passion ” ha ha” I never heard of the show I don’t… Read more »

I have just watched the first episode of ‘Defying Gravity’ and I liked it! It’s a slow burner (pardon the pun!) and I hope that it’s given a chance to reach it’s full potential. It’s about Donner (Ron Livingston) who co-piloted a trip to mars ten years before this new mission to Venus, two of his crew were still on the planet but control kept telling him to leave them cos of a malfunction, he didn’t want to do it but to save the lives of the rest of the crew he had to leave them. He and his colleague… Read more »

Hi Mentat, there’s actually more than just sex in the show, there is something sinister going on with the mission, a hidden agenda, I am about to watch episode four soon and have enjoyed the previous three episodes. Give it a try, what can it hurt, remember never judge a book by it’s cover! Of course you may feel the same way after watching an episode but there is no harm in watching something new is there? Take care and bye!!!

I will lose all faith in television if this show is canned.

I just want to say that I am a guy, and I greatly enjoy this show. No, it doesn’t have a battle scene or fist fight every 30 seconds, but that doesn’t mean only girls can enjoy it. Like others have said, give it a try. If you don’t like it, then fine, but don’t diss it till you’ve tried it.

Totally agree! I stated that I would not watch SGU cos of the way SGA was cancelled but I decided to give the trailer a look and if I liked it then I would think about watching SGU but it left me cold! At least I gave it a try (mostly cos of Lou Diamond Phillips)I really liked the trailer of ‘Defying Gravity’ and yes it has had negative reviews but you should make your own mind up because you might miss out on a good show. It’s up to you guys to decide!

Its not a bad show, but it’ll probably be 1 and done..

It’s great to see that momentum is starting to pick up for this great show! I’m anxious to get the official official word, but the rumors of it not getting cancelled are encouraging! There’s a campaign going on over here to make sure the show doesn’t get cancelled: http://defyingravityonline.com.

I hope the series isn’t canceled as 109 was a great ep, one of those “a lot more will be revealed” kind of eps.