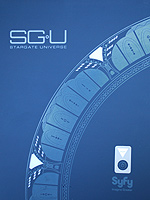 Jumping up and down like Steve Martin in The Jerk when the new phone book arrived — that was the scene at GateWorld Headquarters this morning when FedEx delivered the SGU Press Kit.

The “kit” includes a beautiful, 33-page, full-color leather book introducing members of the press to Stargate Universe. Slipped inside the front cover is a poster card featuring this image of Brian J. Smith as Lt. Matthew Scott.  Two discs nested into the back cover include “Air” Parts 1, 2 and 3 — the first three hours of SGU‘s 20-episode first season.

When that button on the front cover is pressed, the two chevrons even light up!  (See our low-light photos below.)

The book itself introduces the show, the cast, the creators and producers of the series.  Full-page photos of each of Universe‘s nine cast members accompany their bios, and various other images from the series are scattered throughout.

Since we can’t have you all over for tea to look at it, here’s the next best thing: pretty pictures.  Watch for our complete review of “Air” at the end of the month, and the rest of GateWorld’s SGU coverage as we count down the 17 days remaining till the launch.

Click on an image to see a larger version in the gallery. 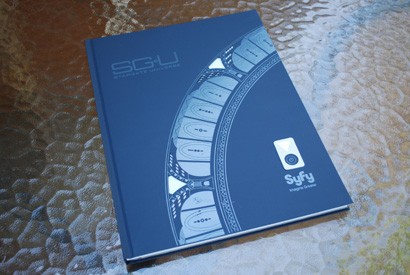 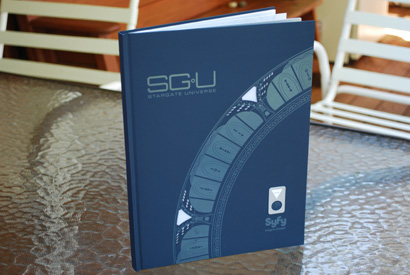 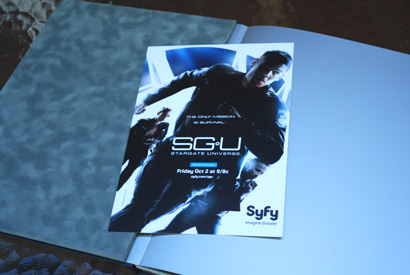 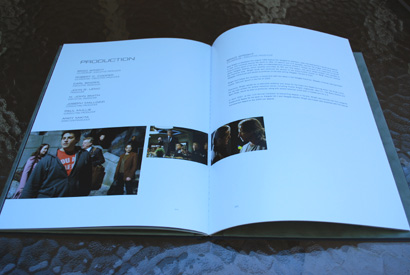 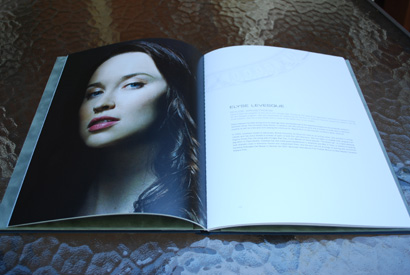 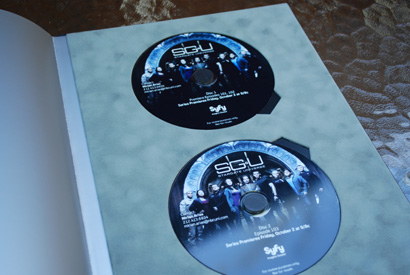 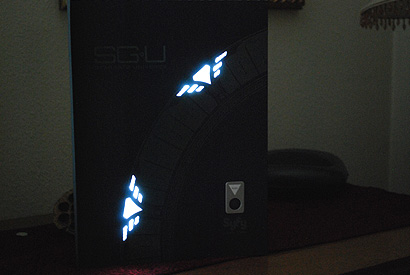 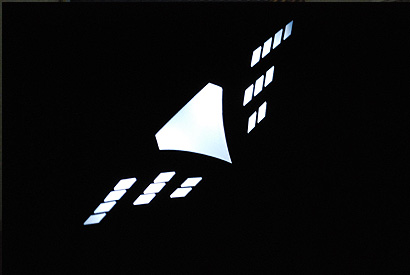 The goal of any network in touting a new show to the press is to “wow” even the most cynical, to get (hopefully positive) coverage.  Of course at the end of the day, the quality of the show itself has to speak the loudest.  But Syfy has definitely wowed us and many other TV writers with this package.

Thanks to our friends at MGM, Syfy and Stargate Productions for sharing this little piece of Stargate history!

Why no bigger photos?

These small photos don’t do the cover any justice.

Hey, if you want bigger photos, I’m sure that can be arranged. :)

Are there any plans to make the press kit available to fans after the show has aired, or something? It looks like an awesome collectors item; not to mention the fact that I’d be intregued to see what is written on all of those pages!

OMG I want that so bad. Hey, good-lookin’…

You are so lucky….. I’m dying to see this show. I never get the sci-fi I like to see. I love the battles and the ships and other worlds. Trek started it but Gate has made me happy for years. Talk about a geek. I get so excited turning on the big screen and sound system when this show comes on. Pop it in the DVR Darren.

So whats on the discs?

end of month, your gonna watch it today, we want reviews tonight,

and when your finnished, how much do you want for it, :)

Wow. Now that is a thing of beauty. What wonderful attention to detail. The lighting chevrons on the cover are the icing on this cake. Very cool.

Roll on October and the start of “Stargate: Universe”!

I know its a long way off, but I hope the SGU season DVD boxset is this nice.

And Please can we have the Review earlier. I really want to hear your opinions on it.

Why aren’t these episodes online yet? You’ve got them for almost a day now.
It is an atrocity that we the fans have to wait (and pay) for them and that you guys just get them (in an awesome unobtainable package). And you guys are just going to sit on that for half a month?
Didn’t you mom teach you anything? You’re supposed to share your toys.

[Note: Not trying to be offensive in any way, really like this site, I just need some Stargate]

Sure, I can post it for you. Destroy the industry relationships I’ve worked hard to build over the course of several years just because you’re impatient. Where do I sign up?

The press kit is a tool to help Darren and I promote the show. Let’s gain some perspective here, please.

@David Read Read: Thanks I really appreciate that, any open torrent website would be fine, just posting it on an FTP site would be nice to. I see no better way to promote a show by actually showing it or doing something with this press kit. I fail to see how you guys will promote to show with this press kit by sitting on this for half a month before releasing your review. Maybe waiting a couple of days more, until after it aired would be just as helpful to Syfy. (unless Syfy said no previews/reviews before , but mention… Read more »

silly afbylyryver! You’re so funny! “It is an atrocity.” ahhh… :)

Gateworld obviously knows what it is doing in its promotion.

Since it seems all you need is a website to get a fancy press kit like this, perhaps I will start my own Stargate Fan Site so they can ship me one.

Woah!, my Sarcasm meter just went off the scale David :-) You can promote my Star Trek Online fleet site if you like instead.. 6thfleet.com :) (/me fully expects that link to be removed by mods hehe)

seriously guys leave David, and Darren alone. They worked hard to get were they are at. If you want one really bad then buy one on Ebay. Ya I wish I had one, but will have to wait. I hate waiting.

Listen, there are at least 2 on ebay. They were up to $120(too rich for my blood). Once they are sold, any NDA or romantic syfy/mgm relationships that were associated with the material dissolves with the new owner(although copyrights, etc still apply!!!.) Who ever that may be will surely strip any intelligent errors, identification codes, hidden unique audio or video distortions (that will identify the original disc owner), and have them on torrent sites in no time. So stop badgering Dave. I’m sure he knows that leaking the episodes would probably do huge favors for Syfy, but he doesn’t have… Read more »

Bah, all this secrecy garbage in the industry is so old and tired at this point its actually off putting. Like when they wouldn’t let you see the monster in Cloverfield until a week before it opened, its stupid. I get that they want anticipation but I find the only 2 reasons to really hide things are if you don’t want them stolen or they suck so much you can’t afford to let people see them.

Neither should apply here.

Three things I’d like to address. First off, the reason they have this press kit is because they are, in fact, one of the top groups that gives news on Stargate, ie, they ARE the press. You don’t get one because you’re only a fan, and you’re not the one who has large connections and groups of people reading and watching YOUR news. Why? Because, frankly, we don’t care about you. Second. The reason there is a measure secrecy is in this business is to indeed build up suspense. That’s why it’s a TEASER trailer. Honestly, why would people go… Read more »

seriously, I was introduced to this site about 2 years ago and I continue to be amazed at how much better it is than the official sites. Syfy (I hate that name change btw) should be paying you for promoting their shows. Thank you David and Darren.

@Cameron Mitchell: If gateworld is part of the “press” then why is it that they did not get the press kit but had to ask for it, and that Syfy didn’t give it to them and didn’t even respond to their request but had to go and beg their friends at MGM?
Have you seen trailers lately? They give away huge plot points, some even give away the ending.
And third as I stated I like this site but some of the editors are quite hypocritical and arrogant when you voice you own opinions.

@afbylyryvr: You’re operating under an understandable but false assumption that MGM has press kits and Syfy has press kits, and Syfy wouldn’t give them to us. In fact, our kits arrived from Syfy Channel. The two are partners in the promotion of the show, and are working together closely. What is “the press?” Several TV & film blogs got the press kits in the first round, many of which are much smaller than GW. They didn’t just go to major outlets — and yes, we were surprised to be left off Syfy’s list. While I do feel as though the… Read more »