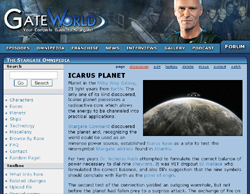 This week we’re very excited to announce the relaunch of the Stargate Omnipedia, GateWorld’s online encyclopedia of the entire fictional Stargate universe.  The Omnipedia is six years old this year, and long overdue for a makeover!

The Omnipedia now boasts 45 entries covering every person, place and thing from the 3-hour series premiere of Stargate Universe.  That’s everything from Nicholas Rush to the Icarus planet, from the Destiny to the kino!  We’ll update it weekly as new episodes air.

When we launched the project it was easy enough for two guys to keep up with a handful of seasons of Stargate SG-1.  Then Atlantis arrived, and doubled the workload!  Omnipedia users have rightly bemoaned the fact that, over the last two years, the project has sadly fallen out of date.  The old HTML frames system, once designed to make browsing easier, has also become antiquated.

The new Stargate Omnipedia utilizes the popular MediaWiki software (the same thing that Wikipedia runs on), making the editing process quicker and enabling us to bring in a team of Stargate experts to help keep entries up to date each week.  Its built-in search function is also more effective and more intuitive.  Unlike public wikis, however, the Omnipedia is not editable by readers.  We’ve made this decision because there are already some great Stargate wikis out there, and because we want to keep tight control over the quality and accuracy of material you will find here.

The wiki software also lets us do things we couldn’t do before, such as grouping relevant entries by race and creating dictionaries of various alien languages (coming soon!). And that Random Page link is hours of fun!

This is an on-going project. We are eager to show off the new Omnipedia with all the SGU data — but we are still in the process of adding missing entries from the second half of Stargate Atlantis and the two SG-1 DVD movies.  Some existing entries are also in need of updating.  Rest assured that the team is on the job.

We are also converting the images to new high-quality, widescreen shots.  You’ll see lots of these all over the Omnipedia, but also plenty of the older, small images that we are replacing.  If you are looking for a larger picture of something, you can also click on the image to get a high-res version!

A special thanks goes to three incredible, hard-working people without whom this relaunch would never have happened.  Colin, Quade and Aaron have tirelessly migrated all 2,246 entries from the old system into the wiki, and begun the enormous task of updating them.  They have slaved for weeks for nothing but a “Thanks,” because of their love of Stargate and their enthusiasm for the project.  Meanwhile, new entries are being busily written by GateWorld’s David Read. If you enjoy using the new Omnipedia, give them a shout out in the comments below!

We hope you enjoy the new Stargate Omnipedia.  There are currently more than 2,300 entries, with more being added every week.  Check it out now, and bookmark StargateOmnipedia.com!

The link redirects to the old Omnipedia for now, but I’m sure the new one is terrific. You can’t have to much Stargate on the web!

(I’m talking about the adress http://www.stargateomnipedia.com/).

What the omnipedia desperate;y needs is for the Ships to be given dimensions and the like for the tech enthusiasts. Its sad that fans have to go elsewhere to find these things out.

I truly wish you all could put blueprints and specs etc for all the ships and bases etc. This is stuff they really need to bring out! What would it hurt to have blueprints of the Daedalus and etc? and the Complete complexs I have them of the Prometheus but i got that in the Sg-1 complete visual guide. I wish they would bring out a Atlantis one but,…..it’s hard to hope we are gonna get anything like that for atlantis anymore. I love Universe but still, Atlantis needs more done for it. It deserves all the things Sg-1 had… Read more »

Woo! This is awesome… glad to see the long-teased update finally here. I can’t wait to spend some time browsing around and exploring.

Thanks for the good comments guys.

I love how they said this was a stupid idea when I suggested it 3 or 4 years ago. But then again GW staff is well known for their hypocrisy.

Awesome. Thanks for visiting the site, Newman.