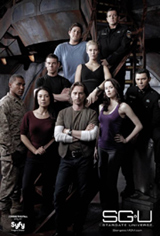 Stargate Universe is gearing up for its big series premiere this Friday night on Syfy Channel in the United States, and we want to see what you are doing to celebrate!

MGM and GateWorld are giving away 10 autographed copies of the SGU mini-poster (right), signed by the cast of the new show!  All you have to do is take a picture of your Universe premiere party on Friday night, and e-mail it to [email protected] with the following info:

Your full name (no online handles, please)
Your postal address in the U.S. (for prize mailing, if you win)
A clever title and/or short description of your photo

Here’s the catch:  You can’t send in any old photo you have lying around.  It has to be a group shot (at least two people, but the bigger the better), and the SGU premiere episode “Air” has to be playing on the television screen in the photo!

This contest is open only to residents of the United States, and you must be 18 years or older to enter.  You can only enter once (one photo from your party, no matter who it comes from), and entries must be received by Tuesday, October 6.

Get clever and have fun.  We’ll pick the ten best entries for autographed posters, and show off your handiwork here on the site.

Stargate Universe premieres at 9 p.m. (8 Central) this Friday on Syfy!

Again you screw over non-americans.

Well, that shucks. I want to take part, but can’t since I’m not from the US.

Hand-picked? I’ll never win. As of now, I’ve only got one friend coming over. Hmm… who else do I know?

nathan…take a mirror ;) Group clone-party, where does it say you can’t?

I’m no US citizen either, can’t take part. godsdammnit!

WOOO!!!!! I’m having a HUGE Universe premiere party in my dorm! There will be easily 10-20 people there.

I’ve been building a replica of the Universe gate for about a month now that I will be unveiling at the premiere party! THERE WILL BE PHOTOS of people with the gate….. and the premiere on!!!

I want that autographed poster so hard!

“and entries must be received by Monday, October 6.”
October 6th is a Tuesday, not a Monday. Which is it. Monday October 5th, or Tuesday October 6th? :-)

Also whats the beef with being US only? I can’t cost THAT much to post a poster to another country, I’d even pay for it myself. Make it like “entrants outside of the US have to pay postage” or something like that.

Too bad I don’t know anyone else who watches Stargate… at least that well. But I do live in the US… but a “party” would seem… “Geeky”. I don’t want too many people to know I like Scifi :)

Fixed the date — thanks!

The U.S.-only rule is at MGM’s request. Not sure if its a postage thing, or has larger implications. But I’m on record elsewhere about why Web sites generally have to restrict contests to their home country. There are legal issues involved that vary from country to country. Sorry, gang.

They do know that there is a large fanbase outside the US right?

It is a little unfair that were always excluded from competitions such as this one.

as many of you here are upset like me being A fan in canada where they film 90% of sci-fi tv shows we are always excluded from contests its unfair they should atleast allow canadians to have some contest involvement. every contest from sg1, sga, battlestar, fringe, ect ect now SGU we are not allowed.. i think it show we have some of the best fan bases out there its not fair i tell yea