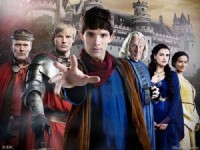 Syfy Channel will pair the spring half-season of Stargate Universe with the new U.K. fantasy import Merlin, The Futon Critic is reporting.

With all the dragons, swords and sorcery you would expect from a fantasy series, Merlin tells the story of the rise of the legendary wizard during his teenage years.  It stars Colin Morgan as young Merlin, Bradley James as Prince Arthur, and features Anthony Head — Buffy the Vampire Slayer‘s Rupert Gilles — as King Uther Pendragon.

Each season includes 13 episodes.  NBC already aired Season One in the U.S., on Sunday nights last summer.  Syfy will air those episodes in a special marathon event on Sunday, March 28, before premiering Season Two alongside SGU starting April 2.

Syfy has not announced yet whether Merlin will air in Santuary‘s 10 p.m. time slot, or if the more kid-friendly show will run earlier in the evening — making for a possible move for SGU to 10 p.m.

Merlin airs on BBC One in the United Kingdom, where its second season wrapped up in December.

(Thanks to Denise for the tip)

Didn’t Merlin kinda flop on NBC? I remember that it aired on Sunday and the ratings were less than stellar… On the other hand, this is not really a show for NBC, it might fit better on SyFy. I’m just not sure how it’ll fit together with SGU – deep space and historical fantasy…

Meh, I think SGU will be fine without any solid lead in, or anchor show. Atlantis had reruns of itself running into new eps and they pulled some of their best ratings.

I didn’t like it when it aired on NBC. IF SGU moves to 10pm I will have to watch something else other than SyFy and I won’t be a happy camper. Leave it to SyFy to muck things up. If it ain’t broke don’t fix it. Please don’t move SGU to 10pm.

Giles is in it? Sold. It’d have to be straight up awful for me not to watch it then.

I actually wouldn’t mind SGU on a later time, plus I’ve always wanted to watch Merlin!

Well, I like Merlin and I’ll watch that. Still won’t make me watch SGU though.

I find it puzzling that a show’s lead-in can play such a dramatic role in determining ratings. It implies real laziness in a lot of viewers! If you like a show, wouldn’t you watch it regardless of what was on an hour earlier? And if you didn’t like a show, would you keep watching just because you DID like the show that led into it? I love Universe, but I really don’t like Sanctuary very much and the notion of a teenage Merlin seems a little less than inspired. Actually, I can barely think of any attempts to do fantasy… Read more »

I enjoyed the less dark aspect of Merlin and will watch it now that Syfy has moved it to Friday nights, but how much of SG:U I will watch is still yet to be decided. If the PTB behind SG:U have come to their sinces and provide some stories to tell instead of who is sleeping with who , and who is stabbing who in the back and all the terrible camera work and dark everything I will watch SGU otherwise I will just watch reruns from my dvr. For the last ten years or so I was faithful to… Read more »

I have zero interest in Merlin and I can’t think of any reason I’d watch that. SGU is a great show and I’d watch it at any time any day. Putting one of those two before or after the other seems… just absurd. Bad programming.I’d rather watch a STU previous episode for the 5th time than see Merlin.

@cupermacleod I think the idea of a lead is its more likely to draw in new people. People who have already tuned into SGU, will either stay or leave depending on their opinion. Merlin would bring in a different type of viewer who may not have watched SGU yet and therefore may stay after Merlin to check it out. Hence the chance for more viewers for SGU. I don’t know if you’ve actually watched Merlin, but it is a fun quirky little show. Not one to take seriously, but still fun. Though, I will admit not sure if the age… Read more »

SWEET!!!! I LOVE Merlin!! …even though I’ve already seen Season 2, this is still awesome, I hope SyFy runs Season 3 as well…this is a GREAT show. Season 2 is leaps and bounds over Season 1.

This is one of the best versions of the King Arthur legend I have ever seen…and I’m a King Arthur freak!

I watched the first season of this… it was way better than SGU. This is the best thing SCYFI has done in a long while.

I’m not sure how much Xover audience there is. Merlin is a family show, SGU is definitely, absolutely not. It’s like pairing Chuck with Sons of Anarchy. I could see Merlin and SG-1/SGA, but SGU? Erm…

And does that mean that SGU will move to 10pm? Because Merlin at 10pm would be utter nonsense.

I love Merlin and have been waiting for season 2 to be shown on TV in the US!!! This is very exciting. While I have seen some of season 2 online I am excited to see it on TV. Merlin is such an amazing show…it’s funny, adventurous, poignant, and generally enjoyable. I thoroughly enjoy the show and am glad there is a new show which I will actually look forward to seeing on Friday nights. I do greatly enjoy Sanctuary, but I have been rather indifferent when it comes to SGU (which is sad since I LOVE SG1 and SGA).… Read more »

Merlin did flop on nbc and i was wondering what happened to it. i am glad scifi bought the show. these are the kinds of shows it should have on it!! sgu really needs to put up some action shows–I HAVE FALLEN ASLEEP WATCHING EVERY EPISODE SO FAR!!! and probably will continue to do so, if i continue watching it. when will they buy Xena?? MY GOD I WISH THEY WOULD GET RID OF GHOST HUNTERS–THAT SHOW SERIOUSLY SUX!!!

The only reason Merlin flopped on NBC is because NBC in incapable of advertising and keeping shows on at a consistent time. I watched Merlin every week…yet every week I had to go online to find out what time it would be on because NBC never actually said the time and kept changing it…it was highly irritating.
Merlin is a HUGE hit in the UK and if it had proper advertising it would be just as popular here in the US.

Merlin is for kids and family evening type show.. it’s not for hard core sci-fi buffs..

By the way, Merlin is not a kid show. It is a family-friendly show, but not a kid show. I am 33-years-old and I enjoy it. The SyFy Channel should have fantasy shows too not just science fiction.

The only reason Merlin flopped on NBC is because it was on Sunday evening at seven (or eight) pm. It was hard to remember that it was on.

hmm season one marathon and then starts season 2 of one ep per week ?
dont they make season 3 already or start to make it ? cause they have showed the season 2 already to the end

I have seen a lot of British shows, and undoubtedly Merlin is one of the best among them. I have already watched season 2 of Merlin online, so I won’t be tuning in. But I can’t wait Stargate Universe to return in April. Just wish it could be sooner!

As I said in an earlier post, I didn’t like Merlin when it aired on NBC as a lead-in to SGU I still won’t watch it, I will have to find something else to watch instead, but I will watch SGU whether it is on at 9pm or 10pm, I like the show regardless, I am a fan and I need my stargate fix!

Folks Merlin averaged over 4 million viewers on NBC and I would expect most of them to follow it to Syfy. I know my DVR records Syfy just as easly as it does on NBC. It would really be a story if Merlin beat SGU when they are shown back to back. I am reading lots of comments with folks saying they plan to watch Merlin but will not be watching SGU althrough I expect SGU to be changed somewhat ater the break because they know a sizeable amount of the franchise’s fanbase is going to leave the franchise if… Read more »

Well thank god it is not Caprica.

Battlestar Galactica caprica back to back.

MY head would explode from depressing unnecessary overly dark drama if that happend.