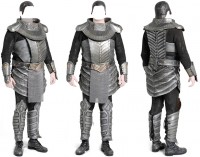 Week two of the Propworx Stargate auctions is on! Last week’s items included icons such as a zat’ni’katel, Daniel’s iconic glasses, Sheppard’s wrist band and an iratus bug — among much else.

What is in store for this week? GateWorld takes a close look at ten of our favorite pieces! Click on the item name to visit it on eBay.

Jaffa Costume
A complete Jaffa warrior costume, used in the production of Stargate SG-1. The Jaffa served as the assault force for the Goa’uld — the primary antagonist throughout the first eight seasons of the series — as well as incubators for the larval form of their masters. Teal’c, a lead character portrayed by Christopher Judge, was a member of this race.

Evil Asgard Helmet
Light-up helmet worn by a member of the Pegasus Asgard group in the Stargate Atlantis Season Five episodes First Contact and The Lost Tribe. Up until this point it was believed that the entire Asgard race had become extinct, but a splinter group found in the Pegasus Galaxy proved that this was false.

Anti-Replicator Gun
Prop Anti Replicator Gun used in the production of Stargate Atlantis Seasons Three to Five. Based on the Anti Replicator weapon developed from Jack O’Neill’s mind on Stargate SG-1, these refined human versions were used by Atlantis expedition personnel as they fought the Pegasus Galaxy Replicators.

Wraith Data Device
This Wraith Data Device was used throughout all five seasons of Stargate Atlantis. Wraith used them to interface with their technology, as well as Earth technology. Dr. Rodney McKay acquired a number of these devices and added USB jacks to them to operate with human tech. This particular prop remains unaltered.

Baal’s Sword Hilt
Hilt of a special sword used by actor Cliff Simon as Baal in Stargate: Continuum. The Goa’uld Qetesh, in the body of Vala Mal Doran, used her mate’s own sword to slice him in half from the stomach up. Includes blue tip where a digital, one-atom-thick blade was added in post production.

Lorne Costume
Costume worn by actor Kavan Smith as Lorne in the Stargate Atlantis Season Three episode, Sunday. Dr. Carson Beckett paid a visit to Lorne on a pier facing the Atlantis command tower. It is here that we learned the major is a painter. Lorne was one of the last people to see Dr. Beckett alive.

Mitchell’s Family Photo
Photo of Ben Browder as both Cameron Mitchell and his grandfather, Captain Mitchell of the Achilles, used as set dressing in Stargate: Continuum. In the original timeline Captain Mitchell stood alone in the picture, but his grandson made slight adjustments to history to prevent the Goa’uld Baal from completely transforming the future. This photograph, displayed in Cameron’s locker, is the sole sign that history remained altered after Baal was thwarted.

War and Peace Dust Jacket
Dust jacket for John Sheppard’s copy of War and Peace, used by actor Joe Flanigan in the Stargate Atlantis Season One episode, Home. War and Peace was one of the few personal items that Sheppard took with him to the Pegasus Galaxy. He chose it because it would take him a considerable amount of time to read. By Season Three’s episode: The Return, Part 1, he declared he was only about a third of the way through the book.

This is just ten of the 100 items available on eBay this week! The auctions expire Sunday evenings Pacific Time, the same time the next 100 items begin to appear.

Stick with GateWorld over the coming weeks for more prop and costume highlights from the Propworx auction. Visit StargateArtifacts.com for more information!

Only thing I would want is probably the Lorne Costume. :P

I wanted Shep’s wristband, but was outbid by just a little….
Hmm, what can I get for $20?

So do tell…what’s with Shepherd’s wrist bands?

Apparently folks wish to clone their very own Joe and name him John.

It’s all part of an ingenious plan to buy props from each SG1 and SGA cast member, use them to clone new actors and then make the movies!
Hah!

instead of clonning i would rather take the real joe flanigan home and put him to good use. he he

Okay, here’s the plan: We buy everything, put it all back together, and then we make the Stargate Atlantis movie. http://bit.ly/8qJ2tQ 5:46 AM Jan 26th from web

@sgfan I believe David is somewhere, even now, putting his brilliant plan into effect…
dGeek will rule the world using the Stargate movies as vehicles for his message….
(so who needs Dr. Horrible anyway!!?)

I can’t believe how much these things cost! I’m hoping that as the year goes on, the interest in the auction wanes so that us poorer fans have a chance to get some memorabilia.

i wanted Daniel’s BDU shirt but got outbid. Shep’s wristband sold for like $900! whats so cool about them?! i wonder what female fans were planning to do with it, wear it? or put it on display? i know what i would do with a zat, i would put it under my pillow.

I just won the auction on McKay’s computer table. It’s a little folding stool with a mono-pod laptop table. Can someone tell me what episode this prop appeared in?