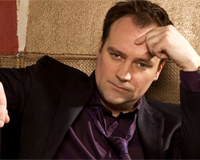 Stargate Atlantis‘s David Hewlett (“Rodney McKay”) will return to Syfy to star in a new creature feature, the network announced this week.  Hewlett stars in the TV movie Morlocks, which air sometime during the 2010-2011 season.

Here’s how the network describes the story:

An experimental time machine opens a window into the future and mutated monsters (the Morlocks) use it to come back to the present and go on a murderous rampage.

If the title is any indication, it could be inspired by the classic H.G. Wells novel “The Time Machine.”  In that story, a nineteenth century inventor creates a time machine and travels hundreds of thousands of years into Earth’s future, where he attempts to liberate a tribe of simple human descendants from the Morlocks — humanoid creatures that live underground and prey upon them.

He is currently back in Bulgaria serving as director on a different Syfy movie project, which he described as “an evil snow monkey adventure.” Keep up with those goings-on by following David on Twitter!

Makes me sad when actors can only get such crappy roles and work. Oh well, at least it’s a job.

DH is a talented professional actor with a good sense of humor. I’m sure he approaches all projects with the same level of professionalism regardless of the scale of the project. Let’s face it folks the ScyFy channel isn’t Shakespeare. Hopefully these projects are stepping stones to something greater in the future and if not so be it. I’m happy to see him busy too. Keep up the good work David!

BTW – I hope the TPTB are checking out this week’s poll.

Happy to see him working! Even on these cheesy movies – I know I’ll tune in just to see one of my old favorites from SGA. If there isn’t going to be an SGA movie, at least I can see the actors again in something.
Also we have Red with Kavan Smith and Conan with Jason Momoa to look forward to. I hope that Joe Flanigan and Rachel Luttrell will show up onscreen soon too.

Yeah, I hear he used to carry a really good sci-fi show before it was abruptly cancelled.

Joe Flanigan has a movie (TV?) in post production called “Good Day For It” starring Robert Patrick & Hal Holbrook slated for a 2010 release. He will play Deputy Brady.

Rachel Luttrell is in pre-production for a 2010 release called “Resurrected” playing Lily. She co-stars with James Russo.

Did anyone see the 2009 release of “Hardwired?” Rachel played a character named Candace. (Way down in the credits. The movie starred Cuba Gooding, Jr., Val Kilmer and Michael Ironside.

I don’t understand Syfy. Why do they have to have so many new movies? Not all of their movies are bad; some have half decent plots with crappy special effects while others have fairly decent special effects with crappy acting. They should try making half as many movies as they do and save up the money for the right combination of way better special effects and good actors (like David Hewlett or Joe Flanigan, to name a few). I think fewer people would be complaining about their movies then they are now. I think this movie would be pretty good… Read more »