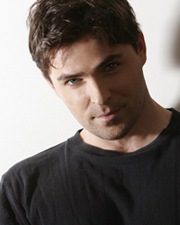 Former Stargate Atlantis actor Kavan Smith has been tapped in a leading role for the Syfy Channel’s Red, an original movie inspired by Little Red Riding Hood, the network has announced.

Here’s how Syfy describes the movie:

In the action-packed Red, Red (Day) brings her fiancé home, where he meets the family and learns about their business – hunting werewolves. He’s skeptical until bitten by a werewolf. When her family insists he must be killed, Red tries saving him.

Red is planned for a 2011 broadcast on Syfy.

Felicia Day AND Kavan Smith? Together? OMG. Too much awesomeness for me to take.

Very happy to hear that Kavan will play a lead role … there’s just not enough of him on television. Now I just have to hope we’ll get to see it in Australia!

I always get reminded of Chekov from TOS when i see him, which is weird.

This is the one cheesy Syfy movie I’ll be watching. Terrific cast!

Despite the inherent cheese factor that comes with the fact its a Skiffy movie, I’ll definitely be watching it.

Need to see more Kavan on my screen ;)

Yeah, finally. My friend will be so happy she gets Kavan candy soon. Been kinda candyless since they cancelled Atlantis. Granted syfy movies are cheesier then melted Velvetta but hey if Joe Flanigan was going to appear in one I’d have a front row seat with some heated totilla chips for sure!!