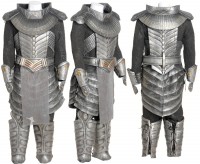 The eighth week of the Propworx Stargate auctions started Sunday night, and is off to a great start! Already the Jaffa costume, the second costume to be posted, is quickly approaching $1,000, and Sheppard’s wrist band is right behind.

As with every week here at GateWorld, let’s take a look at some of our favorite costumes and props that we’ve selected in this week’s series of over 100 auctions!

Jaffa Armor Costume
A complete Jaffa warrior costume, used in the production of Stargate SG-1. The Jaffa served as the assault force for the Goa’uld — the primary antagonist throughout the first eight seasons of the series — as well as incubators for the larval form of their masters. Teal’c, a lead character portrayed by Christopher Judge, was a member of this race.

Ancient Crystal Console
Control console from the Ancient era featuring numerous control crystals, used in the production of Stargate Atlantis. A gap underneath the panel enabled production to light it from beneath.

Replicator Pistol With Lights
A stunt Asuran Replicator pistol used in the production of Stargate Atlantis Seasons Three and Four. Nicknamed the “staple pistol” by production, this beautiful prop features faux crystals in the front and Ancient writing on each side translating to “neutralizer”. A switch on the unit turns on numerous LEDs.

Harmony’s Map
Map used by John Sheppard, Rodney McKay and Princess Harmony to escort the young girl to the Temple of Larris for her rite of passage. Used in the Stargate Atlantis Season Four episode “Harmony”.

Ori Staff Weapon Crystal
Crystal of the type used in the front end of Ori staff weapons. Cameron Mitchell used a crystal of this type to adapt a power supply to activate a phase-shift shield over an entire village in the Stargate SG-1 Season Ten episode “Line in the Sand”.

Pegasus Gate Segment
Piece of the Pegasus Galaxy Stargate, created for Stargate Atlantis. This section is a piece that was cut off during assembly. 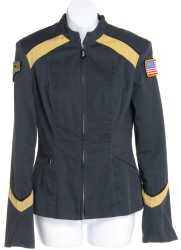 How did last week’s auctions perform? On the high end, Jack O’Neill’s sunglasses sold for $2,550, the break-away Zero Point Module sold for $2,051, and the Ori Warrior armored costume sold for $1,200.

Stay with GateWorld each and every week for highlights from the Propworx Stargate auctions! Check out the other 100 items for sale on eBay now, and be sure to pay a visit to StargateArtifacts.com for weekly video and text blogs!

The more they sell the more I’m concerned that there won’t be much left in order to make a movie. Although on Joe Mallozi’s blog the other day he said that there may be news on making another SG-1 movie.

Not to worry, Jason. They will make more stuff to make the new movie. And one day hopefully we will sell that too!

And yet another Wristband going for hundreds and hundreds of dollars! I love it!

thats right go ahead and sell off all of the concept art for the shows that has never been seen before. the special features on the star gate dvds suuuuck. last time we got a visual effects featurette was on season 3 of sg1 i think.