The seventh week of the Propworx Stargate auctions has commenced! As always, each and every week GateWorld brings you a sample of the props, costumes and set pieces available for purchase on eBay.

This week some exciting items have launched, including a Zero Point Module (We’ve been told this will be the only ZPM available outside of the live auctions), Apophis’s costume from Stargate: Continuum (Same with this costume), and even original artwork depicting Teal’c’s space walk from Season Three’s “Nemesis!”

Here’s our run-down of favorites …

Break-Away Zero Point Module
Zero Point Module designed to be shattered, made for the production of the Stargate Atlantis Season One episode, “Home”, when Rodney McKay bursts into anger. The most powerful energy source known to exist, Zero Point Modules were used by the Ancients during the “golden age” of the race 10,000 years ago. Three of the devices, utilizing vacuum energy, were powerful enough to carry an Ancient city-ship from one galaxy to another in a matter of days.

Apophis Costume from Continuum
Costume worn by actor Peter Williams as Apophis in “Stargate: Continuum”. Apophis was one of the dominating Goa’uld System Lords during the beginning of the series, and had both human and Jaffa followers. By the time of this direct-to-DVD feature, he had died and returned to life through numerous storytelling techniques.

Tok’ra Chair
A screen-used Tok’ra chair seen in numerous episodes of Stargate SG-1 from Season Four onward. The Tok’ra were an off-shoot of the Goa’uld, identical in physiology but dramatically different in philosophy. Much of their technology was crystal-based, and their chairs reflected the crystalline nature of their civilization.

Teal’c First Prime Cape
Cape worn by actor Christopher Judge as “Teal’c” in Stargate SG-1. Despite defecting to Stargate Command, Teal’c often used a Jaffa cape when he wore the clothing of his native people. When he returned to the side of Apophis in Season Five’s “Enemies,” Teal’c also wore a cape. Production has identified this as a stunt cape. 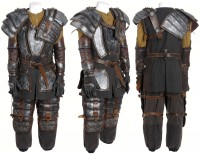 Ori Warrior Armored Costume
A complete Ori warrior costume, as featured from Stargate SG-1 Season Nine’s “Crusade” through Season Ten and the direct-to-DVD feature, “Stargate: The Ark of Truth”. The Ori were the new villain introduced at the beginning of Season Nine. These non-corporeal beings were forced to rely upon human foot soldiers like these to carry out their will.

Symbol of Justice Original Art
Original concept art sketch depicting the Goa’uld Symbol of Justice from Stargate SG-1 Season One’s “Bloodlines”. Teal’c had this symbol painted on the side of his destroyed house, forever branding him a traitor to his people.

These auctions expire Sunday evening, the same time Propworx launches new auctions each and every week. Check out the full list of auctions available this week. For more information, visit StargateArtifacts.com!