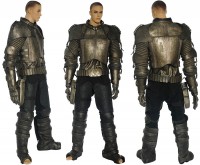 The tenth week of the Propworx Stargate auctions is well underway, with some very unique items included! Items ranging from the impressive Daedalus Variations alien costume and weapon to Dr. Weir’s father’s watch, and even Rodney’s tactical vest, are all coming together in this week’s auction.

Daedalus Variations Costume
Costume worn by actor Dan Payne as the unidentified “Daedalus Variations” alien from the Stargate Atlantis Season Five episode of the same name. These formidable creatures invaded an alternate reality Daedalus while Sheppard’s team was still aboard. 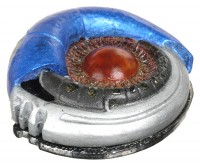 Mimic Device
Mimic device worn by a duplicated officer at Stargate Command, seen in the Stargate SG-1 Season Three episode “Foothold”. When mysterious aliens break into Stargate Command they use these devices to mimic the appearance of one of a corresponding officer.

Zat Gun
Zat gun used by both Jaffa and humans in the production of Stargate SG-1. Zat’ni’katels were introduced in the SG-1 Season One finale, “Within the Serpent’s Grasp,” as a less-powerful alternative to the much larger staff weapon. The name, and the 3-shots-desintegrate nature of the Zat gun became the butt of numerous in-jokes, namely in the 100th episode “Wormhole X-Treme!” 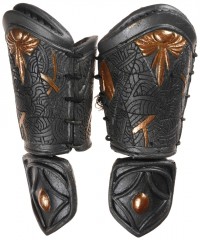 To’loc Jaffa Gauntlets – Hero
A pair of Jaffa gauntlets worn by actor Isaac Hayes as “To’loc” in the Stargate SG-1 Season Eight episodes “Reckoning” and “Threads”. To’loc made the deciding vote in commencing Teal’c and Bra’tac’s plan to retake the Dakara, which ultimately won the freedom of the entire Jaffa race. Hayes returned in voiceover form in the milestone “200th” episode as the announcer for the fictional television series, “Teal’c P.I.”

Goa’uld System Lord Chair
Gold-finished throne chair, used by a Goa’uld System Lord during the Season Five two-part episode “Summit” and “Last Stand”. This chair was used during a rare summit of the System Lords, during which they decided to allow the Goa’uld Anubis to rejoin their ranks. Shows wear from production use. 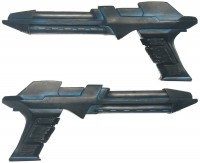 Ancient Control Panel
Control panel from the Ancient era, used as set decoration on Stargate Atlantis. The panel features Ancient writing as well as a control crystal, and is back-lit by a blue gel. Production did not specify which episodes featured this item.

Mardola Harmony Costume
Costume worn by actress Crystal Lowe as Mardola in the Stargate Atlantis Season Four episode, “Harmony”. Believing her sister was too young to ascend to the throne, Mardola hatched a plan with the Genii to eliminate Harmony first.

Heightmeyer Doppelganger Gown
Costume worn by actress Claire Rankin as “Kate Heightmeyer” in the Stargate Atlantis Season Four episode, “Doppelganger”. While sleeping in this gown, Kate is inhabited by an alien entity which plagues her with a falling nightmare that directly leads to her death.

Weir’s Father’s Watch
Watch owned by Elizabeth Weir’s father, introduced in the Stargate Atlantis Season Three episode “The Real World” and seen in numerous episodes afterward on the administrator’s desk. In an hallucination brought on by Replicators, Weir believed that her mother had kept her father’s watch in her care, but in reality she had brought the keepsake with her to Atlantis.

What were the final tallies for last week’s auctions? On the high end, the Wraith stunner pistol sold for $1,648, Harmony’s necklace pendant sold for $645, and Nabel’s stunt costume from “The Kindred” sold for $635. On the low end, Dr. Keller’s surgical scissors sold for $10.50, President Hayes’s blouse sold for $15.02, and a Daniel Jackson ear bud sold for $17.50.

Stay with GateWorld each and every week for our coverage of the ongoing Stargate SG-1 and Atlantis auctions. And be sure to visit StargateArtifacts.com for more information!

Has anyone here ever considered buying this stuff? The lack of comments on the page more or less answers my question for me.