Alec Peters has been collecting since he was a boy. From comic books to sci-fi movies, his interests appear to be endless. So is his talent for executing mega-hit auctions. The famous Battlestar Galactica auctions of 2009 were the doings of Propworx, the company for which he is the CEO. Not to mention, the company has just completed a highly successful auction of the props and costumes from the first Iron Man film.

Now Propworx is moving into Stargate territory, selling over 2,000 items from the franchise in two live auction events (August and December, tentatively), not to mention weekly auctions going on right now!

In this interview Alec takes us back to when he started collecting, his interest in executing a Battlestar Galactica auction, the up-and-coming Stargate live auctions and weekly auctions, and where he sees Propworx going next.

GateWorld: I’m David Read with GateWorld.net and I am here with Mr. Alec Peters, the CEO of Propworx. Alec, thank you for taking time to talk with us.

GW: How did Propworx start?

AP: Propworx started a year and a half, almost two years ago now. I was a big Battlestar Galactica fan and that show was coming to an end. And I am a big collector of Star Trek screen-used props and costumes; I am one of the bigger collectors. And we had just spent the better part of two years bidding on stuff that was on eBay through another company.

It was a great process for the fans, other than having often to deal with this one particular company. It was really a struggle. Bad customer service, no returned phone calls and when Galactica came around, someone mentioned, “What’s going to happen to the Galactica stuff?” And my first thought was, “Wow, I hope Legends Memorabilia does the auctions,” because they had done the Stargate auctions a few years ago and done a really good job with them.

But I found out that they weren’t going to be interested in the process. “There is no way I am dealing with company X again on Battlestar Galactica.” I said “Well, I’ll do it.”

One of the companies that I had started had just wrapped up and it was a great position. So, I contacted Richard Hatch who was my acting coach when I lived in L.A. in the 90’s. We’re good friends, we meet for dinner every year at Dragon-Con in Atlanta were I was living.

I said “Hey, Richard, find out who’s in charge of the disposition of the assets for Battlestar Galactica.” So he puts me in touch with Ron French, the line producer, who puts me in touch with Kurt Ford at Universal. I’m bidding against the company that had done the Star Trek stuff. I did a presentation and a PowerPoint and everything. Universal loved my vision, which was a lot broader, and involved live auctions which the other company had never done.

And I got the job and it was just awesome. I was really excited about that. I went up and spent three months in Vancouver on the set of Galactica. They filmed the movie The Plan which was after they finished wrapping Season Four. It was an awesome experience. It was really fantastic.

Over the past year, we’ve done two live auctions with Battlestar Galactica, almost 30 weeks of eBay auctions. It’s been fantastic. The fans have been very pleased. I think we did a great job, I think we learned a lot and I think we’re in a position to do better things this year. This year we have Iron Man from Marvel Studios. We’ve got a Star Trek auction and it looks like we’re going to work with CBS on, not of the new movie but of older stuff, like the stuff I collect.

And we’re doing the Kevin Smith auction — in August I believe — of things from his movies. So, we’ve got some great projects and it all started with Battlestar Galactica.

GW: When did you get the collecting bug?

Then, in 2006 I went to the Star Trek auction at Christie’s, which was the first really big production-specific auction and it was spectacular. It was fantastic and I got hooked right away on collecting that stuff. Before that, I had, like, one prop. I had a Judge Dredd law giver from the movie and I had a costume, I have one of the Captain America costumes from the original 1980’s TV movie. Those were the only two things I owned.

Now I got Star Trek, and I got Captain Sisko’s costume which I was really excited about, and I got some other costumes. And then the auctions started on eBay and I started writing, I said “OK, I need to write a blog.” It was my first blog and I started in December of ’06 “Wow,” that one blog really exploded and turned into a forum. And now I have like 4,000 unique readers a month on that blog, all hard core Star Trek prop and costume collectors.

Which then led me to Battlestar Galactica, so one thing leads into another. I still collect Star Trek . Really Star Trek and Battlestar Galactica are the only two things I really collect. But now there is Stargate and I am a huge Stargate fan and so I will collect a few Stargate items, too, I believe. [Laughter] I am my own best customer, it turns out. So when I write a check to the studios, it’s minus x for Alec.

GW: It’s like, “Look, I’m going to be buying most of this stuff anyway so you might as well just go through me.”

GW: There’s so much out there that collectors are just after and it seems like, depending on the person, something’s worthwhile and priceless or it’s just crap. To you, what is the difference? 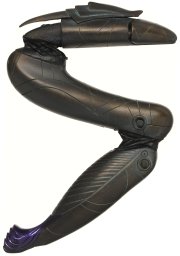 Even within a movie, then everyone has their favorite characters, they have favorite scenes. There are things that appeal to you on an emotional level and that is what people tend to want to buy when it comes to props and costumes. They go “Oh! From that scene, my favorite scene, that’s what I want.”

Where someone else would go, “Really? I didn’t like that episode. I don’t like that character.” We all have favorite characters so there is a huge amount of diversity. There’s times that we’ll list something and we’ll go “What junk!” and it’ll just bring $500 and you go “Well, there were two people betting on that one!” So that’s the thing that’s always surprising and fun and interesting. It’s the different things that appeal to different people.