For those of you who don’t know me, or follow me on Twitter (@marksavela), I am the Visual Effects Supervisor on Stargate Universe. I started my career in Toronto in post-production many, many years ago. I started working in VFX as a co-ordinator/producer around 1996. I worked on series such as Poltergeist and The Visitor and did the pilot and Season One of SG-1.

In Toronto I worked on such movies as Bride of Chucky and Urban Legend. I started supervising my own series and in one year did three series, four MOWs (movies of the week) and a feature. I moved out to Vancouver in 2002 for a movie shooting here. I started working on SG-1 (Season Nine) and Atlantis (Season Two) and have been here for the first and second seasons of SGU. 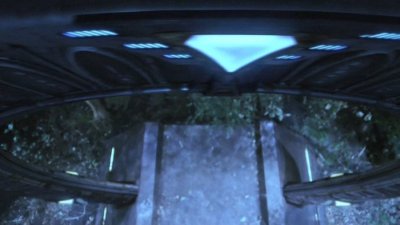 My job is to oversee and supervise all the visual effects work in SGU from script to shooting to post to final product. During the week in production, I will be prepping one episode, shooting VFX shots on set for the episode currently filming and posting VFX shots for multiple episodes. For example, with SGU Season Two we currently have 12 episodes on the go in the various stages of prep, shooting and post.

I’d like to thank David and Darren at GateWorld for approaching me about doing this weekly piece and giving the fans of Stargate an opportunity to hear about the challenges, behind-the-scene stories and the process of visual effects for SGU.

Season One of SGU has been a wild, crazy, exciting fun ride for us in the VFX department and it is very cool to be given a chance to share with you how we made it happen. I hope everyone has enjoyed our work on the show as much as we enjoyed being a part of SGU. 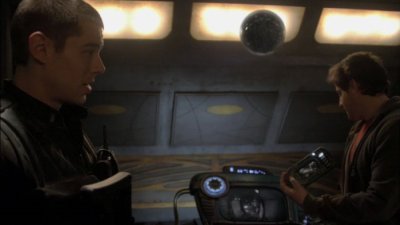 Expect the kino to be a featured topic in an upcoming discussion!

The Production Cycle
As mentioned above there are three basic branches of a production: prep, shoot, and post production.

Then a visual effects meeting where the budget is looked at, shots are added, removed, planning of the execution of shots in discussed and a final VFX budget is agreed upon.

We work closely with the director and DP (Director of Photography) to design the most effect-dynamic shot we can. Then there is a production meeting and tech survey right before shooting starts (a chance to see the sets and discuss needs of each department based on the specific shots).

Shooting – VFX personnel will be on set for any visual effects shot filmed during the episode and work with the directors on set to get the best elements to achieve the final product. VFX will collect camera information that the artist will use during their work.

Post – Once shooting is completed we will get a director’s cut of the episode, then a producer’s cut. We will send out the cut to various vendors who wish to quote the episode. We then have a “spotting session” with the producers/editor to finalize the final budget based on the cut, add or remove shots as needed.

We then assign the shots to the various vendors, live action plates are pulled from the show for the various artists to work on. We work with many artists at this stage until we deliver Temp VFX. This delivery is so that the sound mixers/designers have something to work with in terms of timing and basic concept look.

Temp VFX are shown to the producers and initial notes are given. Notes are given to the vendors and artists; work is then started toward delivering Final VFX. Final effects are delivered and shown to producers. Any additional notes are taken and addressed and revisions are cut into the final episode.

Rinse and repeat nineteen times. That is the VFX pipeline in a nutshell. 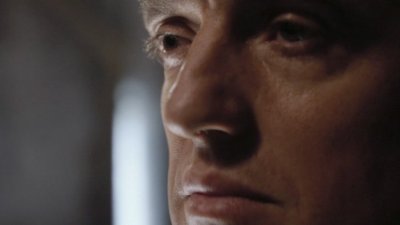 Young transfers unexpectedly into the body of an alien being.

Young “Leaps” into the Alien (“Space”)
The shot breaks down into two parts, the way it was planned and how it was achieved. How it was planned was quite brilliant, actually.

This was shot at the entrance to the alien space ship hallway with walls that matched the Destiny stone room behind Louis. This lighting matched the lighting from the stone room and changes to alien ship lighting. The stone room walls were removed when they were cleared from camera to leave alien walls. Louis wore a “break-away” Young costume that had Velcro that could be pulled off when the camera cleared. He was wearing the “alien costume” underneath. It was an amazing, really smart way to shoot this transition.

We shot a few takes this way and the only thing was there was a very small subtle move when the clothes were taken away. Very subtle, a small resistance/rock from being pulled slightly back a bit.

Robert wasn’t crazy about the movement and felt it gave the gag away. We did separate takes with Young’s costume on, stone room walls in, then alien costume with alien walls in. I’m not sure anyone actually knew what version we used.

The final shot is a comp of those two takes. The contours of Louis’ face had to be warped and manipulated to line up in both takes and a fade on the lighting change. It worked better than I thought it would, but yes, it is a composite of two separate takes.

Visit GateWorld every week for a new addition to Mark Savela’s VFX Diary! Next up … The “Space” aliens!

It must be very hard to match the VFX to the cine camera work that’s done locked onto a paint mixer.

Thank you for taking the time to write such an interesting column. I do have a little knowledge of what goes into post-production VFX work. My youngest daughter is completing her Bachelors in Film at Full Sail University and already has one in Digital Art & Design. We are both longtime SG fans and are continually amazed at the standard of excellence that Stargate is able to bring to the screen. It is as good as any and better than most on TV. You should be very, very proud!

For someone, who has very limited knowledge on how the vis effects stuff work, it’s a very interesting read.

I’m constantly blown away by what I see on SGU, esp the spinning off-world stargate. I hope to read how that’s done, too.