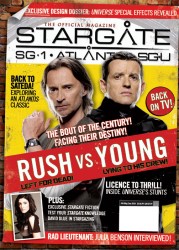 The Official Stargate Magazine will cease publication with Issue #36 (September/October 2010), the editors announced in the latest issue.  It will mark six years of the magazine, which launched in the fall of 2004.

Published by Titan Magazines, the magazine has long provided interviews, behind-the-scenes looks at production, news, games, and other special features to fans of Stargate SG-1, Atlantis, and Universe.

The magazine’s closure is likely due to the difficult economic climate, especially with continual competition from the Internet. (GateWorld partnered with Titan to provide the 6-page “Advanced Telemetry” section of the official magazine for its first several years.)

GateWorld attempted to reach the publishers for comment on the decision, but inquiries were not returned by press time.

Don’t miss the new Issue #35 out now!  And revisit the magazine’s history with GateWorld’s exclusive (and still growing, soon to be complete) cover gallery.

(Thanks to Solutions for the head’s up!)

Stargate Universe has a military advisor? I don’t believe it for a second. Not with the way the military is portrayed on that show.

@JohnSN7 Whatever do you mean? How so? Be specific.

Shame but understandable. Guess the market is not as big anymore. I really liked the Magazine in its hay days – then you could find it everywhere (WS Smith) haven’t seen it there for ages.

It’s such an incredible shame. I really enjoy this magazine. I, for one, will miss it.

Just saw a copy the other day at a specialty store. Too bad because it was a good source of SG1/SGA news. Maybe if the direct to disc movies were in production there would be more interest. As Stargate slips and slides (or rather, shakes) these are the sort of enterprises we value that are going to go down with it.

Are they all still available through back order?

It is more likely that there is nothing worth writing about any more since the demise of Atlantis and the lack of movies that were promised.

I know I let my subscription lapse when SGA was cancelled.

I let my subscription expire when Atlantis was cancelled. SGA has always been my only interest within the franchise so, with the show ending, there was no reason for me to keep my subscription.

That makes sense, the same thing is happening to some newspapers.

I don’t think a military advisor would sign off on the conduct and actions of some of the characters on the show. Scott slept with James and Young slept with TJ, both of which violate the fraternization rules. And that was before they were stranded on the Destiny. Not only that, Scott dumped James the second Chloe pops up without even looking her in the eye. Also there is Lt. James’ brilliant use of C4 in the episode where Scott, Greer, Chloe, and Eli are lost in the ruins.

Just an observation: I subscribed to the mag because I liked having pictures and interviews with the cast and characters of Atlantis. (SG1 too). If you look at the Characters and Relationships threads here on GW, the SGU folder has very few viewers at any given time, compared to SG1 and SGA. So the relative lack of interest in the characters (not the show as a whole) could have an impact on whether people want to spend money for a hard copy magazine. You can get any news about the show you want off the internet, the glossy photos and… Read more »

They do have a military advisor. I’d love to know what they were really doing since I saw so many mistakes.

I am not surprised. The recent pulications I have bought haven’t grabbed my interest , but I’m a boring old SG-1 original fan.
Interesting commetnts re Military advisors. When you think the Jack and Sam danced around everything for 8 years, what advice do they get for the cast of universe considering the subject matter from time to time……..!!

Don’t get me wrong I like Gateworld but they annoy me the way they sugar coat everything.
“The magazine’s closure is likely due to the difficult economic climate” while this is a possibility true Stargate fans would continue to pay the money to get this mag. Could there be another reason the Sales are dropping…maybe the cover pictured above is a clue?
I (like several others that have posted) never renewed my subscription after SGA was cancelled, I have no interest in reading about SGU.