We found out about the kino very early on in prep. I saw the designs from James Robbins around the time we were working on the look of the Destiny.

The kino was designed and then built by the model shop first. The VFX department then got the digital files from Gord Bellamy and the model shop, along with a practical kino ball that they built with a 3D printer, so it was a fairly easy process with good references. 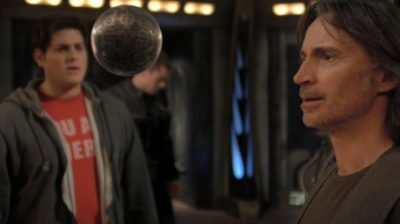 The kino is introduced in the SGU episode, "Air, Part 2."

We had done floating camera balls before (as in the Atlantis episode, “Sateda”). We really wanted for our kino to have a much better constant movement/float to it and a more photo-real look to reflect the style of Universe.

Making It Fly
We did try numerous methods early on to make the kino work that were later abandoned.

1. We tried to fly it on wires and the movement just didn’t feel right.

2. We tried a “Kino On A Stick”; basically the name says it all. It is a practical kino ball with a stick attached to it. There was a shot in the pilot when they were discussing the damaged shuttle where the kino is floating behind Eli. Because of the shooting style of SGU we actually found it easier and that it looked better to replace the practical prop with the CGI version.

3. In the episode “Light” we used a practical half kino on a plane of glass that could float like the CGI kino. The problem was we had to paint out the reflections in the glass and again found it easier to use a CGI kino ball. 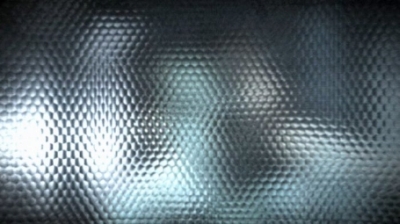 "Kino vision" before commencing a recording, from "Light".

One thing we always do when shooting a kino shot is to run the practical “Kino On A Stick” through the scene where we want it to go. This gives the actors an eye line when we shoot the actual scene and gives the animators a reference for the intended path and movement of the kino.

Physical Interaction
We usually use a couple of techniques when having an actor interact with the kino ball. For example, in the pilot, “Air,” when Eli tosses the kino in the air David Blue was actually holding a real kino prop he dropped to the floor when his hand was in motion.

A CGI kino ball was tracked in and replaced. In the episode “Lost” David just mimed the motion of grabbing a kino out of the air and a cg kino ball was put in later.

Kinos Outdoors
The two biggest challenges of making the kino work on location are tracking to the scene and the matching the lighting of the scene. Tracking is always difficult based on the shooting style of Universe. Fortunately, we have some of the best 3D trackers there are or else the whole process would not have worked.

For lighting, it is always best to get hi-res photos of the location in its lighting conditions to match the key light and various additional lights. 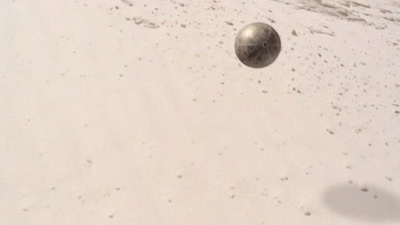 The kino was seen in the harshest possible sunlight in "Air, Part 3."

The Kino in Season One
The most difficult kino shot for Season one was a shot in the pilot “Air”. It is a shot where Scott and Eli are walking down a corridor in the Destiny and the kino is following behind.

The shot was not planned to be an effects shot and was added later when we decided we needed to see the kino in that scene. There was no reference for the kino and the camera movement was very hard to track. It was a very short shot, and one where the kino ball is certainly not featured, but a shot that took actually a long time to complete. 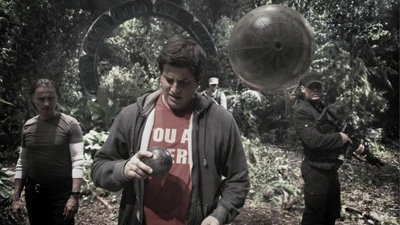 Kinos were immensely important in telling the story of "Time."

I think the kino is a great storytelling tool and very important for the show. It is really a floating MALP that also is used to document the events taking place on the Destiny.

It was used in the episodes “Darkness” and “Light” to really give some background on our characters early on in the series. It was also used very well in “Time” where the whole story was based around the kino POV. I think the kino is a great addition to the Stargate world and one that would not be so effective if the execution wasn’t there.

“The kino was scene in the harshest possible sunlight in ‘Air, Part 3.'” – 3rd caption.

Scene should be seen, if I’m interpreting the caption correctly.

the first time i saw the kino i admit, i freaked out. looked real floating in front of them, i didnt expect that kind of realism. one of my fav scenes is when Scott was first chasing the kino in the corridors. another great scene is the opening in air pt 3 where we see kino in the desert. reminded me a bit of those probe drones on Hoth. kino represents the scary at the same time fascinating aspects of the universe in SGU.

Thanks – great article. Love the technical and clear explanation.

And for the curious: “kino” means “cinema” or “theater” in the Czech language ;P

I was watching the season one episode of Atlantis, “Childhood’s End” the other day, and noticed something familiar. The Wraith probe shown bares remarkable similarities to a kino. Is it possible the Wraith based it on an Ancient design? Or the production team based the kino off of the Wraith probe? Who is to say?

@katikatnik It’s all Greek to me …
– kino also means ‘cinema’ etc in German it derives from French Cinématographe (in German Kinematograph and they took a short form of it :)
and “cinematic” and “kinematic,” ultimately derive from the Greek κινῆμα, -ατος, “movement.”
(yes, I wish my second name was Daniel Jackson :D)

I have to admit, this was a cleaver approach to dealing with the “how does the crew know its safe to go through the gate?” problem. I also like how the writers through Eli find innovative alternatives for the kino’s other than their intented purposes, such as using several of them to make a “hover table” and salvaging the camera to use as a medical tool. I wouldnt mind seeing the writers come up with alternative uses for the kino’s as well, maybe reveal they also have some sort of interior ship defense system (swarm of kinos coming flying towards… Read more »

Eli makes use of the kino with great innovation, such as taking out the camera
and using it in surgery. And aliging a number of kinos to make the hovercraft to help carry
the huge chunks of ice. I’m excited to see what other uses the Kino will have!