The “Space” aliens began, as a lot of the VFX elements do on our show, as concept art that was done by our multi-talented Production Designer, James Robbins. Since the concept art is basically a 2D rendering/drawing on paper we decided to do full maquettes both of the head and full body. 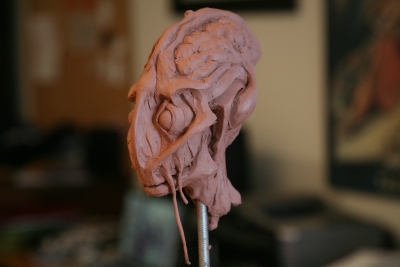 A maquette of the "Space" alien head

James Stewart from Image Engine, who had done a similar process for the prawns in “District 9,” sculpted the original maquettes. I had a couple of sessions with James and Image Engine where we could change design aspects and structure in the meeting and see the changes immediately.

We then had completed design maquettes that could be presented to Brad Wright and Robert Cooper. A few additional changes, and we had the basic design of the aliens.

A 3D rendering of the creature

We really wanted to use “real world” reference for the look of the anatomy of the aliens and Image Engine provided what was basically a “style sheet” of real world animals and creatures. From this we could say, “We want the bones to look like this example. We want the skin to be this texture”. 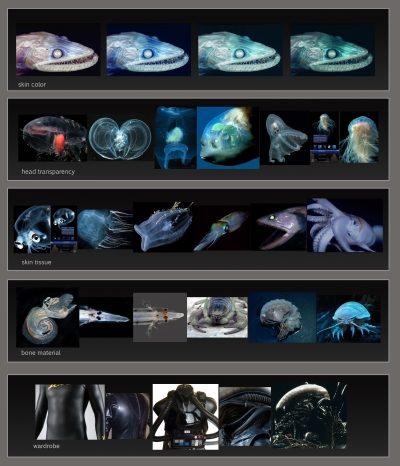 This sample sheet was used as a guide to create the various textures of the creature.

After those decisions were made a 3D artist took over and provided 3D renderings of the completed design. Because the costumes were created already for our actors we took stills of Elyse Levesque for the texture, collar, etc, to match. We went through some color tweaks towards the end, but that’s basically how the Aliens were born. 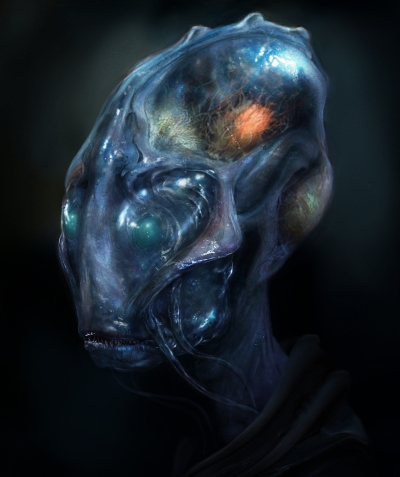 The final version of the alien

From Concept to Application
In “Space” we really wanted to, A, have the creatures live in their environment, and B, not restrict the director (Andy Mikita) in any of his plans for shooting and be very true to the established look and camera work of the show.

We had already shot creatures for the episode “Time” in the harshest of conditions (rain, hand held camera, dark, interactive flashes of light) so we knew we were ready. We basically shot three different plates for each scene.

We would shoot:
1. The action with any of our “real” actors and a stand-in wearing a grey suit for lighting/eyelines and animation reference.

2. The action with our “real” actors without any “aliens” in the scene. And

3. A close approximation of a “clean plate” where the camera operators would try and replicate as closely as possible their camera moves of the previous takes. This is to help the paint-out crew create a true “clean plate” to remove our reference stand-in when necessary.

These processes would allow us to use any take based on our actors’ performances and not restrict editorial choices because of the visual effects in any way.

Interacting with Actors
Having the aliens interact with our actors was the true beauty and fun of this episode. When reading in a script that Rush had a hand-to-hand “fight” with one of the alien creatures you can’t help but get excited. Robert Carlyle was an absolute pro and deserves so much of the credit for that scene.

We shot the scene with our three passes as described above, but for the first pass we had a stunt man which would interact and “fight” with Rush to get the real feel and force of Carlyle’s hands as he grabs the alien or throws him to the ground.

Bobby would then mime the fight choreography, set up by [SGU Stunt Coordinator] James Bamford, alone in the scene. Because our alien was skinnier than the stunt double a “paint out” crew had to completely remove the stunt performer before the alien was composited into the scene. 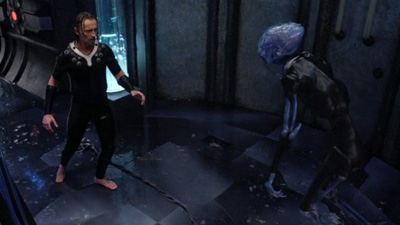 Rush gets physical with an alien

Challenges for the Team
The biggest challenge for me in the script stage for “Space,” in regards to the aliens, was the scene in the communication room when the alien and Colonel Young had swapped bodies and the alien was on Destiny being interrogated by Scott and Greer.

I believe it read, “The Alien (in Young’s uniform) is tied to a chair”. I remember trying to picture a sellable version of the shot and actually being quite apprehensive about the shot. When we shot the scene we shot it with a person with a grey hood, in Young’s uniform, and I remained a little scared of that scene.

My apprehension lasted until long after shooting and when we spotted the effects for the episode with Robert C. Cooper. I tried to cut down the number of shots in that scene but it was Robert who pushed for the additional shots and had full confidence in the final result.

Thank goodness for Robert, for even in the initial stages of work on the shots to delivering the temp VFX for the show, the shots in that scene quickly became, and remain, my favorite shots in the episode. 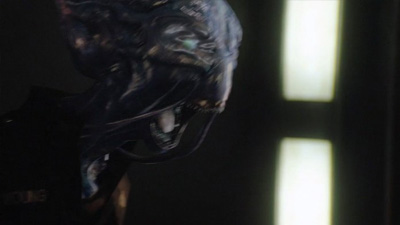 The final version of the alien in Young's body

One of my favorite sayings I remember hearing years ago is, “In Visual Effects you never actually complete a shot, you abandon it.” This is due to deadlines, budget, etc. And it’s at what point you abandon the shots that determines whether you are satisfied or not. I think we abandoned those shots at a pretty good point and I was very pleased with the episode as a whole. 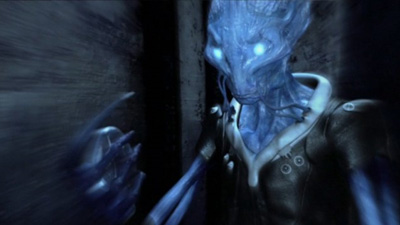 Through flashes in the alien's memory, what was suspected is confirmed: it was using a stone.

Looking to the Future
I think in Visual Effects you want to improve on everything that you do the next time around. The hardest part of our industry is that no matter what you do, it becomes dated almost the instant it is broadcast on the air.

If the aliens ever show up again, I would like more time to work on color, integration into scenes, primary animation and secondary animation. Is our goal to try and improve on almost everything that we’ve done in the past.

Shooting and posting “Space” seems like a lifetime ago. We had shot and completed the episode quite a while before it aired, and even longer now. I do remember it was a great, fun episode to shoot and work on. 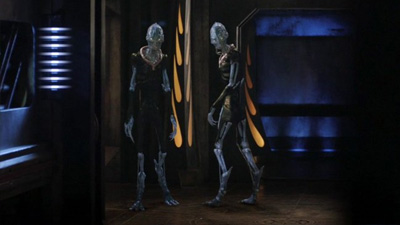 The cast, as always, was stellar in this episode. Bobby and Louis committed to what was happening in each scene involving the aliens and were so professional and fun to work with in these sequences.

The crew was amazing, from Andy directing, James Bamford’s stunt coordination, the sets, everything and everyone involved made it an episode everyone was very proud to be a part of.

Visit GateWorld every week for a new addition to Mark Savela’s VFX Diary! You can also follow Mark on Twitter (@marksavela)! Next up … The Kino!

As someone interested in motion graphics/visual effects, this is fascinating. Thank you.

Yes! I always thought the cool blue aliens looked similar to the fish with the transparent head and huge eyes. Great article, I love seeing the various iterations and examples of color and texture. Just the thought of all the roto, paint, and compositing work done for this episode as I watched it, made my fingers ache in sympathy. :D Congrats to the entire team on the Emmy nomination, I’ll keep my fingers crossed for you!

Another fascinating article. Thank you, Mark Savela, for sharing your time and skills with us.

Awesome! I think those aliens are the best in SG history…

Cool. I love the Smurfs, but they look pretty cool in grey too. Maybe we’ll see another race that’s grey. Kinda like humans don’t all come in one color. That would be pretty cool imo.

Although I don’t watch the show, this article was really fascinating!!!
Thanks for all your hard work in the Stargate franchise, I have been enjoying you and your team’s work for years.:)
And congrats for the Emmy Nom!

Love these guys. They BEST be returning A LOT as the main villain Aliens of the series or I will be the most saddened and disappointed Stargate fan of all time! They do after all, want Destiny.

Thank you all very much. I hope you enjoy reading the posts. I hope they are informative and interesting. Please let me know what you think.
Thanks Again for reading. mark

while I enjoy your work greatly, and I do so since Stargate Atlantis, I really would wish that the camera-work would actually give us time to enjoy what you create.

I wished we would get to actually see your work, instead of a 1 second picture or a badly lit blur of colors.

Anyways, thank you for countless hours of great entertainment and keep up the great work.

Hello mr Savela, i must say ive been a fan of the Stargate VFX for many years but it wasnt until rescently i gave 3d and animation ago myself and ive learned tonnes in the 9 months ive been doing it and as such i must say in regards to “space” that while the still shots of the alieans looked great the movement of the aliens was dissapointing and to me it just looked off somehow. still very nice work and im itching to see more of this vfx diary. also will you be showing us more of destiny? Like… Read more »