Ahead of the 2011 release previously rumored, MGM and Fox Home Entertainment have officially announced the release of Stargate Universe: The Complete First Season, arriving on Blu-ray and DVD on October 5.

The 5-disc set will include all 20 episodes from the show’s first year, plus audio commentaries on every episode from the cast and crew, all 30 kino webisodes, and lots of extra featurettes. The high-def release includes several bonus features not on the DVD, including an extra “Destiny SML” (Star Map Log) and the SGU: Survival Instinct game.

That’s all the same contents as the Season 1.0 and Season 1.5 releases, which were released in February and July. According to the studio’s announcement, “SGU Season One Blu-ray and DVD feature an extended pilot with never-before-seen footage and exclusive behind-the-scenes featurettes.” We’re not sure if that means this set has even more material that wasn’t on the 1.0 and 1.5 sets, or if the “never-before-seen” is a reference to the television cut of the episode. 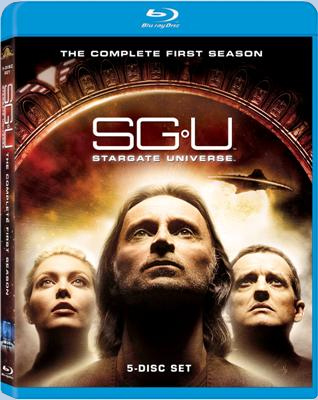 Pre-order it now on Amazon.com and help support GateWorld! As of press time, the Blu-ray

Any word on a pal version release date Darren?

I love it when they come out with things earlier then their supposed too. Brightens my day!

This is odd they say it is not out till October 5 yet in the UK it has been out for awhile now and I just ordered mine, should be arriving tomorrow.

Unless it a new set with added features, but I am unsure as why they would release the two different versions as that would mean making more than one type of box set and discs.

i already got Season one box set SGU on blu ray here in the UK, the added features is a extended version of Air (all three parts together with extra scenes), ask me if you want to know more

@aaron – I should have mentioned (as Simon did, above) that the complete season is already out in the U.K. They didn’t do half-season releases, and got the full season in early July.

@BCA Phoenix
That’s the same as is on the half season sets.

If the 1st half season was 1.0 and the second half is 1.5, then what does this count has numerically?

on my birthday! YES!!

This was the DVD release I was waiting for. I will pre-order this set immediately!

A rare occasion where the Americas get the prettier boxart.

Yeah I couldn’t wait in Australia, so bought the UK blu-ray version and am so loving it. Have to agree the US box art is fantastic.