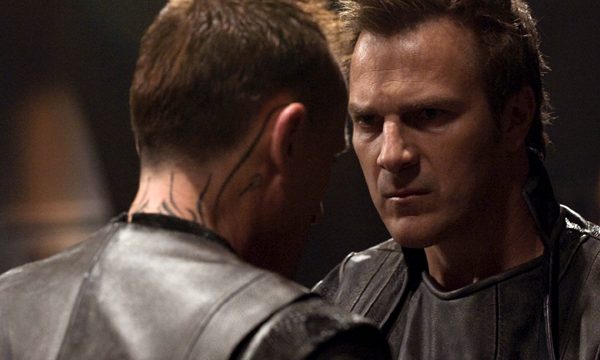 Don’t miss tonight’s brand new episode of Stargate Universe! “Aftermath” picks up right where last week’s season premiere left off, and promises at least one VERY BIG development on board Destiny. (Check out the preview video below if you can’t wait …)

Remember that SGU is now airing on a new night: Tuesdays at 9 p.m. (8 Central) on Syfy! Watch it live if you can, and tell all your friends that the newest incarnation of Stargate is kicking it up a notch or ten in Season Two.

Come back after you’ve watched the episode for GateWorld’s full coverage, all week long! We’ll be adding episode analysis, Omnipedia updates, a complete transcript and a summary, and high-quality screen captures. We’ll also release our “Aftermath” podcast next Monday, and fans will be talking about the episode from minute 1 in the dedicated “Aftermath” folder at GateWorld Forum!

Here’s your sneak peek at “Aftermath.” As always, beware of significant SPOILERS …

Rush has Destiny stop at a planet that was locked out of the ship’s controls when food and water become scarce, and the Lucian prisoners become an issue.

With food and water supplies running dangerously low and tempers flaring, a shuttle is deployed to an unstable planet whose Stargate has been locked out of Destiny‘s controls.

Still recovering his battered body, an exhausted Dr. Rush manages to unlock the master code to the ship’s bridge. There he finds a planet within range that seems viable but for some unknown reason, has been locked out of Destiny‘s controls. Its Stargate also appears to be non-functioning. With the need for food and water becoming dire, he decides to override the ships controls and have a crew shuttle to the planet in the hopes of finding much needed supplies.

You can catch up with the newest episodes every week at Hulu (U.S. only). You can also purchase previous episodes on iTunes or Amazon.com.

“Aftermath” airs this Friday on SPACE in Canada and SCI FI in Australia, and 12 October on Sky1 in the U.K.

Am I excited? Not really, because I’m not seeing what I want. But I’m curious, and for me, that’s more than enough to watch anything. I’d like to see Rush become the explorer that he’s meant to be, and for Young to support him.

O, before I disappear into the dense darkness of despiar and decadence that is the internet

Yes, Chloe has fish cooties, aren’t you excited to see the rashes? I know I am :)

Just finished watching the episode. After last week was enjoyable, I held my breath for fear that the second season would be as uneven as the first. I’m glad to say that I actually have hopes that this season has been written better than the first. Nice job!

Is it just me or is the Second Season seem to be going slow?

One thing we don’t seem to have to worry about with SGU is lighthearted banter or anything with any humor…DRAMA… everyday all the way…..yip….e