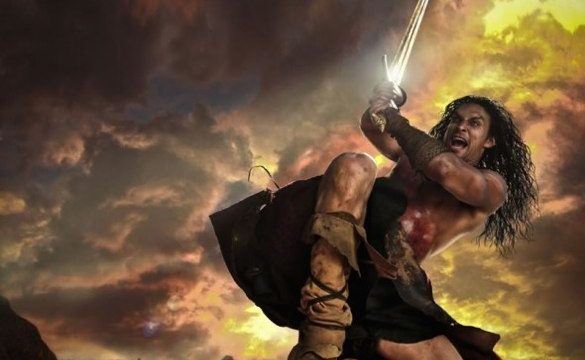 Been missing your dose of Jason Momoa since Stargate Atlantis went off the air?  Us, too.

But buck up:  Lionsgate has announced the release date for the Ronon Dex actor’s big screen debut, Conan (a.k.a. Conan 3D).  The film will hit theaters on August 19, 2011.

That will put it in competition with such films as Fright Night 3D and Spy Kids 4: All the Time In the World, according to ComingSoon.net.  Final Destination 5 opens in 3D the following week.

Momoa plays the title role in the film by director Marcus Nispel, about a man who travels across the continent of Hyboria seeking revenge for the murder of his father and the slaughter of his village.

(Thanks to Madwelshboy for the tip!)

I’ve been looking forward to this. Just as long as they still screen it in 2D, I’ll be going to the movies to watch it.
I’m perfectly happy watching a 3D image on a flat screen without stupid glasses and a surcharge.

It’s in 3D? great… Much as I’d like to see Jason do some more stuff my interest is waning. Anyone know if it’s being shot in 3D or having it added in after like that awful clash of the titans movie?

The 3-d is being added in after… but I still am really looking forward to it.

Yes yes yes! We finally get a Conan that looks like Conan and can act too!

Ronon was basically Conan in SGU, so they picked the right guy.

Oops, mean SGA, but there are no edit buttons here…

This can only suck. Ill set my expectations low and adjust them down as i see more.

Jason Momoa should be great in a Conan role, but.. a story line with a hero on a revenge quest for the deaths of family and friends has been told.. I don’t know.. at least 100’s of times. Jason would be better served by a project with a more original plot.

Ah BlueThunder, you’re either very funny or naive. There are no more original plots in Hollywood. All blockbusters are just recycled old stories or sequels, and 3D. Original plots can only be found in indie film festivals.

Not expecting much from the plot, I’m also over 3D. Still watching it for sure. Put simply: Jason hubba hubba Momoa.