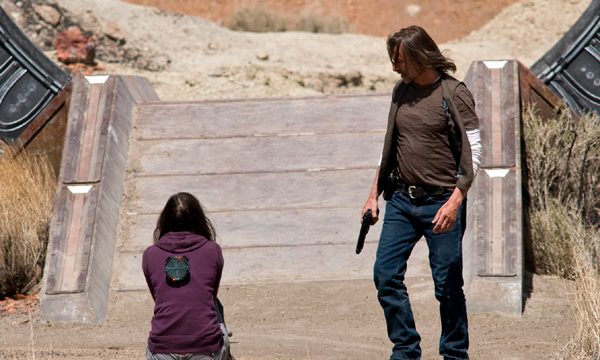 Ratings for the second season of Stargate Universe held pretty much steady this week,with an estimated 1.025 million viewers tuning in on Tuesday night for episode eight, “Malice.”

That’s a drop of just four and a half percent over the previous week’s episode.  SGU has been playing yo-yo with its ratings so far this year; the show has yet to see its ratings move in either direction two weeks in a row.

Last Friday Sanctuary picked up 1.574 million viewers, an impressive 25 percent improvement over the week before.

Just two episodes of Stargate Universe remain before the mid-season break!  Tune in next Tuesday for “Visitation,” which picks up on a storyline from Season One’s “Faith.”  It’s at 9 p.m. (8 Central) on Syfy Channel in the United States.

@arnoldrimmer Thanks, Captain Obvious! I didn’t know that.

geesh. how can a show expect to survive if they analyze every minute up and down turn of viewings every second of everytime an episode airs? so 100 more people watched one week, or 200 less another. Maybe some people had to take their kids to soccer or karate or something. Micromanagement never works.

The ratings trend this season is obvious and it’s flat. The real point is that this was supposed to be the big one in the “front half”. US on-location filming, improved in consideration of Stargate fan’s expectations, and to be a big ratings success leading up to the break. I think what’s become obvious no matter what you think of the show is that it is sitting at a point where it is relying on established viewers and is not bringing in any more eyeballs no matter how you want to spin the stats. Remember there were some pretty high… Read more »

^”Visitation” is the episode that profits from “Malice”. People aren’t psychic, and most don’t read spoilers.

@ Evilslayer: True. It’s usually the episode after a good one that sees a ratingsrise, and the one after a bad one that will have lower ratings as people tune out again for the next one. We’ll have to see the fallout of Malice on the ratings next week. I’m starting to think that’s the quality of the show isn’t even having such a bearing on the ratings anymore. Season 1 gave an impression, a bad impression to many, so those viewers wandered off. I found Malice and almost the entirety of season 2 so far absolutely amazing but a… Read more »

That are really good ratings for NCIS LA! I really like this series. It is not as successful as NCIS, but with these ratings it will still have a long life. :-)

And it is nice to see that Sanctuary gained a lot of viewers. Last week Sanctuary got a series low with 1.257 million viewers. And this week they gained over 300,000 viewers. Now that is a nice uptick! :-)

It’s not about seasons, it’s about characters that no one can relate to.

The personalities of the characters aboard ‘Destiny’ range from pathologically negative to outright clinically insane.

When you don’t have a character you identify with / look up to / like on an emotional level, you just don’t come back.

yeah, my fav is rush and i’m not sure if that is becauase i like the character or if it’s because he’s Scottish. i’m going to go with Scottish because haft of the s*** doesn’t make sense.
the only ones that comes close is the LT. and the Sargent.

I want to like Stargate Universe, I really do. It’s Stargate, and it holds a special place in my heart. But, it just can’t do it for me, its missing the magic that Stargate SG-1, and to a smaller degree, Atlantis had. They were fun to watch. Universe… I just can’t relate to the show, or the characters. Even with the reveal of Destiny’s mission, while really cool, isn’t enough to make me passionately watch. Even tho I wish it was, the quality of the show is extremely good. I sadly actually forgot this episode was even on this Tuesday,… Read more »

I really wish they would stop comparing the viewership of show’s like Dancing with the Stars to SGU. The kind of people that watch that brain dead crap do not watch SGU. The drop in live viewers has little to do with the show but how many people watch it online or download it via iTunes as compared to when SG-1 and Atlantis were on. I personally live in Japan and used watch the show when it hit SyFy.com / Hulu, but now that they cut that I’m forced to torrent the show. If they want to people to watch… Read more »

Mentat has a point that the show is relying on established viewers, but at the same time you can trace the majority of the problems to the change in day to which it airs. as soon as it moved to tuesday nights; the raitings dropped dramatically. not only do people have things to do during that timeslot; heavy hitter shows that bring new eyes are it’s contenders. the fact that no station has realized that the internet is going to kill the TV like the Tv killed Radio. stop relying on just the TV, post it for free on the… Read more »

@general grievous I agree with you.Isn’t it ironic that in a show that was supposed to be and by all accounts and proclamations still IS a character driven show,so many people think the way you do,mind you..most of them don’t even follow the show anymore,they’d given up during,or after the first season. If that hadn’t happened,I’m sure SGU would nowdays be drawing somewhere around 1.7-2 mil viewers like SG-1 had been for a long time. The problem is they just didn’t evolve characters,their characterisation and interactions fast enough.By now it seems they’re stuck,without any character progression and the end result… Read more »

@Evilslayer: ‘”Visitation” is the episode that profits from “Malice”. People aren’t psychic, and most don’t read spoilers.’

Unfortunately, people were saying the same thing about The Greater Good and Malice and instead of rising, Malice dropped. We’ll see…

This proves my point that SGU is too awesome for casual viewers :P ;)

Hello people, just discovered this site.
Over the years I’ve watched a number of SG eps in all forms and for the most part I like them. I recently bought the complete SG: Atlantis series and so far its fairly entertaining. Next up the complete SG1 series and for Xmas I hope to get SGU:S1. We must all keep watching Sci-fi otherwise its all CSINCISHouseLietome etc.etc.etc… all the time and my brain just can’t handle that. I guess outerspace just appeals to me more.

Also, I thought that ‘Malice’ was alright. At this point in the series I have no idea where Destiny may be going course wise, but I will stay tuned.

@Eternal Density casual viewers are the people who keep your shows up.

And the fact that SGU is such a smart show is simply BS.It’s diferrent,it’s no smarter than SG-1,or Atlantis..it just imitates BSG visual style more..that’s about it.
Otherwise,most of it so far has been borring..a smart show should have been able to concise everything that had happened so far,much sooner,,character wise and story wise..that is called synthesis in logic,for those who think they are smarter than a casual viewer!!

The value to Syfy in a proven franchise like Stargate is that there is less uncertainty in creating a new show. Put “Stargate” in the title and follow the formula. Except, when you call it Stargate but you toss the formula out the window. People show up expecting one thing and get another. That being said, I have seen some progress in bringing SGU more in line with Stargate’s tried and true formula. They seem to be driving toward Young and Rush forming a O’Neill/Jackson type of bond. There has been more camaraderie among the crew. Malice was a disappointment… Read more »

@Jim: It doesn’t imitate BSG at all & you know it.

@Gaeth No,not at all..
Of cours it does,in a visual style and they themselves admited it..the moving,unstedy camera to give a more realistic,almost documentaristic perspective,darker tones..no that has nothing to do with BSG..what was I thinking?

If you remember the SYFy promotion before the show even started..it went;something in between LOst and BSG..that wa sthe official promotion of the show..go back and read those announcements,you’ll see if you don’t remember.

Where can I watch new episodes of SGU online! Me no have cable and depend on online postings. Unlike last season, online postings this year have become very stingy, both on hulu.com and syfy.com, they each only have the first 2 eps. of season 2 posted, and seem to have forgotten about SGU altogether, it has been well over 30 days since their last post. Any other sites I can go to? I need my SGU fix pronto.

@ Jim.. Darker Tone and Shaky Cam does not are BSG Originals!

@Jim: Yeah & The Shield did that way before then. As for a dark and run down ship, Firefly had that before BSG. I don’t care what the announcements said. To facilitate counter arguments against the BSG fans that would troll the SG1 & SGA message boards on imdb, I actually took up the tedious task of watching BSG. It was one of the most awful (and yet popular) things on television. To say the least, if SGU was *anything* like BSG I would not watch it for a second. You can recycle talking points all you want, it won’t… Read more »

@Kathar of the Hill People: AFAIK, you can’t legally. New episodes are not available online until 30 days after their first airing. Or that’s what I heard. It’s TPTB’s attempt to give the ratings a push.

@Gaeth If you put all those technical elements together,SGU has the visual style of the BSG,that’s all.I also never said that BSG was the first.Of course movies and TV shows influence each other.But it doesn’t mean that because of that fact SGU is either better,or worse than BSG. Regarding BSG..I think it’s one of the best sci-fi shows ever and I’m obviously not alone in that..the show was popular because people liked it..you didn’t..that’s ok..it’s a very well known fact that the discussion about tastes is pointless. But the cool fact is,or at least should be that no matter what,regardless… Read more »

About the only way that SGU has distanced itself from BSG is that I believe BSG was getting better ratings.

I’m one of those SG-1 and SGA lovers that doesn’t like SGU. But I must say that the episode “Malice” is the first episode I actually enjoyed! It had action, some Sci-fi and some drama that actually added to the episode! I think that if more episodes are made like this one the rating will go up.

@jonah1956
I believe that will happen,actually there are sings it’s started happening,I can feel the positive change in SGU and I honestly hope it’s not too little too late!

“When my wife watches the show with me, she sees it as a drama now, not a science fiction show.” – Brad Wright “… I don’t want to say alien. I don’t want to say the word alien. It just doesn’t feel like our show. Why can’t I say ‘those things’ or ‘that creature’ or whatever? We start saying the word alien and it just takes the show into a weird sci-fi thing that it hasn’t been so far.” – Brian J. Smith “I think the hard-core fans feel the same way that people felt about Star Trek. ‘How dare… Read more »

Since my question to Eagalis was unceremoniously deleted, it seems that citing sources is forbidden which is a bit odd.