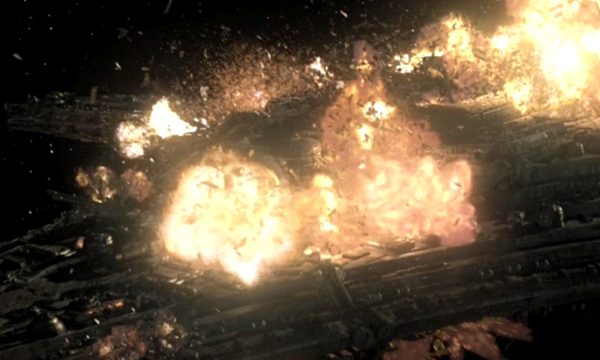 This past week GateWorld was headed into the last days of 2010 planning our last podcast of the year on wrapping up the first half of SGU‘s sophomore season. Then “the other shoe dropped,” as they say, and we learned on Thursday that Syfy has canceled Stargate Universe. So instead, in this week’s final show of the year GateWorld’s editors welcome sci-fi insider Diana Botsford for an important discussion.

We’ll talk about Syfy Channel’s programming strategy — including the move to Tuesdays — plus the style of SGU, and more. We’ll also speculate about the possibility of Stargate movies once MGM emerges from bankruptcy, what we’d like to see from a fourth series, and what else is still ahead for the franchise.

Join the conversation in 2011! There’s plenty of podcasting to come next year, and we want you to be a part of it! We’re taking the holidays off, and will be back around January 10 to discuss SGU‘s second season so far. Call in any time between now and the first week of the new year and share your thoughts on the past 10 episodes and where the show is headed!

We’ll also have an extra-big listener mailbag on the cancellation news when we return, so call now and share your thoughts.

Leave us a voicemail on the GateWorld Podcast Hotline any time, day or night, and we’ll play some of your responses in the next podcast! Just dial:

Listeners outside the U.S. can use Skype to call for just 2 cents per minute. Or, record a brief message on your computer and e-mail the MP3 or WAV file to us.

You can also leave a comment below, or post on the Podcast Feedback thread at the forum.

Next Episode: SGU Season Two So Far. Call the GateWorld Podcast Hotline any time between now and the first week of January to be a part of our first show of 2011!

Funny how the podcast starts with the great music that made Stargate so enjoyable. Soundtrack — Reason 7 right there for you.

Good podcast Darren, David, and Diana. I agree with many comments made. I think this kind of show is very niche and it did have some cards stacked against it. But I still can’t help but feel that shows like this can be a success if they’re done the right way. It just has to be really good. As was mentioned the new Star Trek reboot did very well. I’m just thinking this show wasn’t the right one for the current market. I’m not knocking the show itself but it was in a tough position given the tone of the… Read more »

The Pop up podcase and RSS feed dont seem to want to play through IE.

Never mind, seems that it took longer than ussual to load.

Move Stargate back home to Showtime!

I think the franchise is dead, no more stargate SG:1, SG:A or SG:U. In any form.

Honestly I think that the only place that Stargate can go from this point forward, especially after seeing how a purely arc driven show was received, is to go with full public disclosure of the Stargate program to the people of Earth. Not only would this allow for the continuation of all three ongoing arcs (Lucian Alliance War, Wraith War, and Destiny’s Mission) but it would allow for more of the “close to home” type episodes like SG-1 was filled with. I think that the distance, both literal and figurative, that Universe had with our Earth and our galaxy was… Read more »

SGU’s failure wasn’t about the market. It was slow and boring, dark and depressing. Why are the masses over analyzing the debacle. The very concept and characters empathetic relation with the audience. We had a lot of talk about more realistic characters but is pettiness what we want see out of everyone?

From what I have read, SGU had a significantly higher skweing male to female viewer ratio than the previous incarnations. You need to figure out why the women didn’t show up for this one.

One reason might be shallow, but SGU didn’t have quite the same eye candy for the lady viewers like SG1 and SGA did. Could be a partial reason for the 80/20 split in the M/F demographics.

I think female viewers really like “bromances” in their shows too.

SGU didn’t have more realistic characters, they just had different characters. Believe it or not, military men and women do have personality–and SG1 and SGA choose to depict more warming characters. SGU chose to be like BSG instead of being like Stargate. There is a way to progress the franchise and draw in new fans without saying FU to the fans that made the franchise.

i followed SGU the last year on sci fi channel europe and like was said here it found it pretty dissapointing. Very slow story, not much action, i really miss a crew that catches on. the writers would do good to go back to form a hot group of actors that do at appeal to the public and with a much faster story with at least more humor in it. The SGU story was much to dark with a storyline that didn’t go anywhere and wasn’t very atractive to follow. But most important i think this set of actors just… Read more »

what would be the point of having stargate public knowledge? it changes nothing to the stories. absolutly nothing. there are already corporations, international gov, nerdy kids involved in the sg program to a degree. Who else do you want? what do you want out of such a huge change to the premise?

Just throwing an idea out there. Since the Entire Stargate Franchise was cancelled on SGU’s watch, perhaps the SGU fans failed the entire franchise. If they (SGU Fans) decided to DVR and Download to watch later, without watching it live, Because something else was on, can they be considered true SGU Fans? just sayin’..

@sg1sga: It did not & you know it. BSG was garbage, pure garbage. SGU was great, it had adventure, exploration *and* character drama You’re just recycling the same talking points. Enjoy your re-runs.

Stargate Wrestling – with fighters from all galaxies . In episode one Jaffa would be fighting with a Wraith warrior. We would see how they train, some interviews etc. Iw would be very exciting! The looser will lose everything (Jaffa will be executed with his all family and Wraith team will loose one hive ship).

Dancing with a Goa’uld
A system lord is looking for a new host in a galaxy best dancing tvshow. The host will be changed in each season and the loosers will work as a slaves in a mining :)

@Piernik: you Forgot,
Wraith Chef – A show where the Wraith show you different ways of how suck the life out your victims.

Survivor Pegasus – Where a bunch of misfits are stranded in an unknown galaxy, Far, Far away.. Wait, That sounds a whole lot like SGU.. So scrap that idea.

I’m just coming up blank as to suggestions on what would have saved the show.

I’m curious what this will mean for the future of Gateworld as it’s bread and butter was an audience coming here for info and to discuss new episodes.

I don’t understand how they couldn’t alternate series after Smackdown, similar to how Showtime staggers their series, and how AMC staggers Breaking Bad, followed by Mad Men, then followed by Walking Dead. They don’t air it all in one night. It would have made sense to have Caprica follow Smackdown, followed by SGU, and then Sanctuary, and then return with the same pattern after Sanctuary finishes it’s mid-season break.

TV executives can cancel every show on air right now but they will not tell me how to use my DVR.

[…] “Six Reasons SGU Was Cancelled”, I found great hope in it, and I highly recommend that everyone listen to it. Remember how I mentioned that in discussing SGU with some GateWorld team members at a convention, […]

Legend of the Seeker was *not* arc based in any way. It was the opposite of an arc driven show. You could watch the first 2 episodes of the season & the last episode & you would have missed nothing. It didn’t reward loyalty, I still watched it though. Oh, BSG & Caprica are still awful.

I hope the failure of SG-U doesn’t end the Stargate franchise as a whole. There were some very good actors in SG-U, but the producers basically got the formula wrong. They tried to incorporate the dreariest parts of BSG and in the process, turned off a lot of Stargate supporters. They idea might of SG-U might have been good, but it didn’t work so lets move on. Just because us Stargate fans generally were less impressed with SG-U, doesn’t mean we’ve stopped liking Stargate! So give us the SG-A movie, then perhaps another SG-1 movie and in meantime come up… Read more »