As a television producer, N. John Smith has had a long and very fruitful career with a portfolio that stretches back to the mid-1970’s. His contributions to the Stargate franchise are innumerable — as he’s been a guiding production force at Bridge Studios in Vancouver since 1997 when his tenure began with the Stargate SG-1 Season One episode “Bloodlines.”

Ironically, our first interview with Smith also comes at a time of crossroads for the producer who, after so many years in the industry, has stepped back on many previous involvements (including the Stargate franchise) to concentrate more on things that are personal to him: hobbies, passions, and expanded time with family and friends.

GateWorld caught up with N. John Smith earlier last year when he was a guest on the Creation Entertainment Official Stargate Convention Tour. During our discussion with him, he talks about how he (by chance) began working in the industry, his relationships with the cast and crew, the difficulties in shooting two series at once, how the industry has changed in the past generation, his reasons for stepping away, and more!

Our interview with N. John Smith runs almost eighteen minutes, and is available in audio form for easy listening. It is also transcribed below!

GateWorld: John, it’s great to finally sit down with you and talk to you!

GW: Tell us a bit about how you got your start in the industry. You’ve said in the past that this business was something that sort of chose you, and you got into it by default.

NJS: I did.  Well, the Canadian Broadcasting Corporation wanted to do a television series basically based on what I did for a living. Years ago, I was what you call a beach comber. Which on the west coast of British Columbia is someone that salvages logs et cetera along the coast. Of course, in Polynesia, it’s a bum that walks along the beaches picking up shells. It’s a legitimate business here. It’s 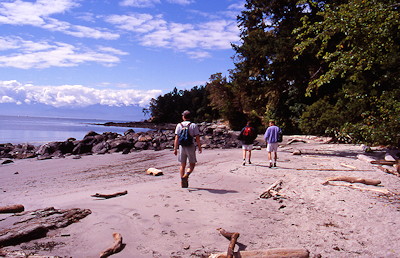 Beach combing -- a legitimate business in British Columbia -- and the first stop on N. John Smith's path to Stargate.

called log salvaging. I got interested in that when I was quite young, and that’s what I did for a living and the CBC — the Canadian Broadcasting Corporation —  through a fellow, a producer by the name of Phillip Keatley, decided to do a television series based on that particular line of work.

They came to my hometown. We own a building that’s right in — a waterfront building — right in Lower Gibsons where I grew up. That was perfect for the main film set. One of the characters in the series was person by the name of Molly, and she had a kind of a diner/restaurant called Molly’s Reach. And this became the main film set. And I was of course a beach comber, so the production people wandered down the docks and they saw these boats there and they were interested. And they said, “Well, who runs these boats?” My father and I happened to own the boats there.  They were interested in using as the main character boats on the show. They asked me if I would be their technical advisor.

So, it was supposed to be a four-month job.  And that’s what I did for four months. And then the series was very popular and it went on for 19 years in Canada, 16 of which I did.

GW: A bit more of a time commitment.

NJS: It was a huge time commitment. Of course, I had my other business to run so I couldn’t strictly do that. I had to in those days, I filmed with them during the day when they wanted, and then I’d go get my other work done. I’d work around the clock kind of thing. Just in order, because you never knew if it was going to be the last year. They would get budget money, like early in the spring they’d phone up and say we’re going to be doing it again. So, you never knew. It never was a long-term job in my opinion.

But, over the years of doing that other production companies came to Vancouver.  The film industry in BC became a bigger industry. Of course, I was the only person who had boats and equipment working on the water. We kept developing new things. So, I worked on a ton of other productions. Just as a boat operator. Rented the boats or did boats stunts and things like that. And I had done this film for a producer of MGM called Chris Cites.  And I managed to do this job that was in their opinion a hard job to do. It wasn’t a hard job at all. But it appeared to be. It impressed this guy. So he phoned me up about three years later. And, he said, “MGM wants to do a production of the Sea Hunt series, and would you be interest in working on it?” I said, “I’ve never done anything like that but sure.”

A local producer by the name of Blair Murdoch owned the project. Another producer, who I knew, he was a director on Beach Combers. I became the production manager on the project. I got permitted into the directors guild. And I’ve never looked back and I have been doing it ever since. So it is kind of interesting. Then years later, Chris Cites ended up doing a television project and I was doing another one for NBC, I guess at the time. And our two shows were airing at opposite times. So, we’d phone up and say, “My ratings are better than yours this week.” It was kind of funny! It was really interesting.

NJS: It was!  He was a terrific guy, and I haven’t talked to Chris for years but [he’s] like a very cool, very smart American producer.

GW: For those that are unfamiliar, lets add some detail.  What does a producer — whether it is executive or otherwise — have to do on a television show? 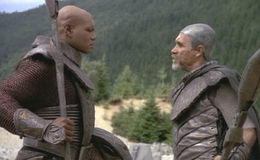 The Season One SG-1 episode "Bloodlines" would mark Smith's first contribution to the franchise.

Part of that job is having a good rapport with the cast.  And I did have a good rapport with the cast.  I probably knew … the cast would come to me and talk about things. You know, sometimes that they wouldn’t go to other people and talk about it. That was a lot of fun having that relationship with people.  It is difficult having a social relationship sometimes with people you work with.  But, the cast of SG-1 was really, pretty interesting people.   And all of them in their own right normal human beings.   As much as an actor can be a normal human being.

So, Rick [Richard Dean Anderson] and I got along like a house on fire. Rick early in his days on SG-1 learned to respect Brad Wright as the executive producer.   So Brad got along well with Rick, too.  But Rick and I became sort of like brothers. He liked my wife a lot. They are sort of like a brother/sister relationship. We became social friends. We hung out together. He’s been up to my cabin, water skiing. Taught his daughter how to water ski, and stuff. We just became really good friends.

I actually thought the SG-1/Atlantis back-to-back years were really fantastic. I loved Atlantis, but I felt it dropped off a lot when it had to stand on it’s own. The cross-overs between the two series’ were great. It’ll always be my fondest memories of Stargate. SG-1, followed by Atlantis. One awesome night.

Thanks for the interview. It’s interesting to hear from those who are so influential in producing the shows we love, but who keep a fairly low profile.

Interesting statement that SGU cost twice what Sanctuary did. That was the first season I’m assuming?

nice interview! i especially loved what he said about amanda and rick. :)

also interesting that he didn’t directly answer your question about the future of the franchise… :o :/

Well, no wonder that SyFy took Sanctuary over SGU, with similar ratings, Sanctuary must be much cheaper, what with SGU’s budget being twice what Sanctuary spends.

What’s really interesting is that the talk of budgets mentioned that the budget was defined in US dollars. That means that through the lifetime of SG1, the amount that could be gotten for the budget would have gone from a ratio of like 1.8:1 to around 1:1. And even with SGA it would have probably gone from 1.3 or so to 1:1. This means SGU would have been much, much more expensive from the beginning. So it’s ratings would have had to have been much better to be kept around since it didn’t have an established fanbase. I don’t know… Read more »

Thanks for this intervieuw. I think John Smith is a very nice man. I loved the intervieuw, and how he spoke about Rick and Amanda.I wish him all the best in what he is going to do now and that he now can enjoy his private life more as well.It looks likes that all from Stargate falls apart and even the magazine just ended wich is very sad. Looks like we loose it all.Well thats my personal feeling about it.Will it all be gone soon or do we get more of Stargate.I hope so. I also think that in this… Read more »