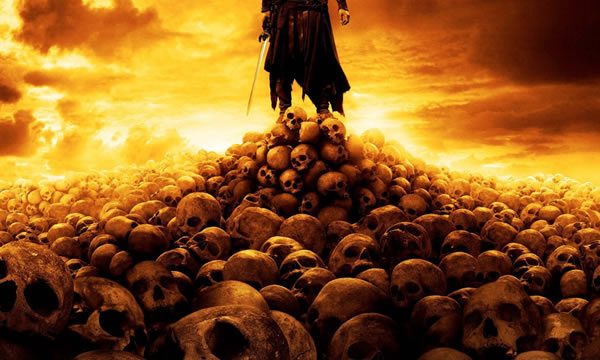 The studio has released the first teaser trailer for the movie, plus the first Conan poster — both of which feature Jason. Watch the teaser below, and click the poster image to the right to see a larger version.

There’s also a cool, 3D version of the poster at the movie’s official Web site.

There’s also a multi-page spread with set photos in the new issue of Empire magazine, on news stands now.

Conan the Barbarian also stars Rachel Nichols, Ron Perlman, Stephen Lang, and Rose McGowan. The story follows Conan’s bloody revenge quest after the murder of his family and his village. It opens wide in 3D on August 19, 2011.

(Thanks to Kevin and Russell for sending in the tip!)

totally worth it to see a movie with jason with no shirt on for 2 hours!!!

Expect more of this – news that is only peripherally connected to Stargate. Stargate franchise RIP.

Somehow I lost all interest in seeing this movie.

Love Jason, but this doesn’t exactly look like my kind of movie. Good luck to him though!

Have you guys announced Jason’s appearance in A Game of Thrones as well? It starts on April 17 and you can see a new preview video of it here http://www.airlockalpha.com/node/8336/game-of-thrones-teaser-fear-and-blood.html. He’s certainly been busy! These are two pretty big series he’s appearing in.

Jason running around chopping up the enemies with a bloody big sword? What’s not to like? I’m looking forward to it.

I fully expect this film to suck.

I haven’t seen the original, but all I could think when I saw this was “damn, what a perfect role for him.” And then he started talking, and… oh, that didn’t sound so good, I have to say. Though to clarify, not so much the line itself, as the way he said it. I don’t know, maybe it’ll work in context, but had it just screamed “Terrible acting! Stay away!” which is kind of surprising, because I know that Momoa is a good actor, so… I don’t know what to think. Had it been anybody else, that would’ve been a… Read more »

I wish everyone involved in this film the best of luck but I won’t be going to see it. I never was going to see it to be honest and that trailer up there has pretty much sealed the deal. There’s only one Conan to me and that’s Arnold Schwarzenegger. Schwarzenegger as Conan looked like a grim, rough, battle-hardened barbarian whilst Jason Momoa as Conan just looks like a tanned male model with some scars. I think Momoa’s been woefully miscast in a movie that I highly doubt will hold a candle to Schwarzenegger’s Conan the Barbarian. All the people… Read more »

I wished they showed more in the trailer.
Don’t know if it’s good or bad movie.
Guess I’ll have to wait to find out.

What the hell was that?

i wish game of thrones didnt hav so much sex in it…then i might be able to watch it…jason momoa and sean bean(boromir from lord of the rings)…that show would actually have some potention as a primtime cable show..

@Alan: That’s funny because Arnold looks so little like the guy Robert E Howard described. And yet Jason does. Hopefully this movie will be truer to Robert E Howard than the 80’s version.

@Gaeth: I think Arnold looks closer to this piece of artwork from 1932

than Jason does. I think the resemblance to Arnold in both face and build is remarkable.

I’ll give it a chance, but I can’t shift the nagging feeling that this film is going to be a flop.

haha nice. ill give it a shot. hey does anyone know when the blu-ray for season 2.0 is coming out????