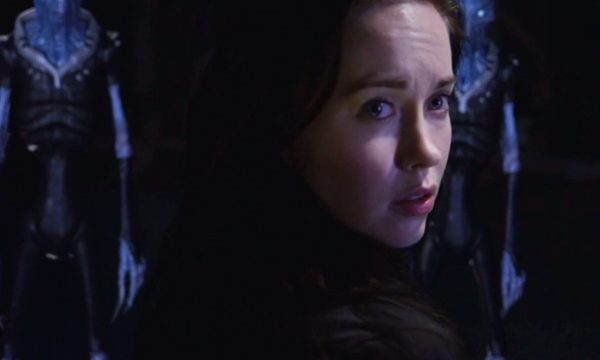 U.K. fans rejoice! The final 10 episodes of SGU are almost here.  Sky One has announced that it will premiere the second half of Stargate Universe Season Two on Monday, April 11.

The show moves from Tuesdays to Mondays at 8 p.m.

In “Deliverance,” the crew of Destiny must fight to survive against not just a fleet of automated drone weapons, but also the hostile aliens who kidnapped Chloe and have followed them into this galaxy.

The satellite network had previously announced that the show would return sometime in May.

New episodes will continue weekly on Sky One through mid-June. The full season will be released on Blu-ray

Yay! I was beginning to wonder/worry if we were gonna get the last 10 eps or not. Seems like such awhile ago since it started up on US/Canadian screens that I don’t recall it taking this long to come to the UK.

Do we know what the ratings have been in the UK? Not that it really matters but I’m interested nonetheless.

Alan I’m in the UK. What I can remember during series 1 Universe was getting approx 800k per episode. Thats not to bad as with Sky we have to pay for it, it’s not like the BBC and other channels which are free so gets a lot more viewers.
What I can remember SG-1 used to get about 1.5 million on Sky, so not in that class.

The ratings in the UK declined extremely. Season 1 started with 891,000 live viewers. The ratings were much lower in season 2. I know the ratings of four season 2 episodes.

I read somewhere a couple of years ago that Battlestar Galactica, Mad Men and The Wire all had a UK audience of about 200 thousand viewers on Sky, BBC4 and BBC2 respectively. As these were my 3 favourite shows at the start of 2009 I felt that I belonged to an exclusive club of people with good tastes. As an SGU fan in 2011 I’m again in a small group with good taste – hello to you all!

I have no idea how many SGU live viewers are in australia.We get it 3 days after it airs in the US.On sci fi australia.Then it’s on a free to air channel a few months later.RIP damn.

[…] SGU Portal – Our SGU Portal has been updated to include the premiere of S2.5 in the UK on Sky One on Monday, April 11, at 8 PM. Additionally, Region 2 will be getting the complete season on DVD/Blu-ray on July 4. (Source: Gateworld) […]

Yipee!!!!! Thank god – i was just about to sign up onto a US VPN to view the remainder of the series. The second season has been brilliant. Every episode has been an improvement on the previous one. I understand that the first season needed to establish a lot in terms of character, story arcs etc but I cant help thinking that if only they had compressed the whole of season 1’s story line into the first half of the season and then plot out the first half of season 2 into the second half of season 1, the pace… Read more »

As if no one here knows the real reason for the ratings decline.
Its because They air so late after the US everyone has already watched them on this thing called the internet. This is how it works: you watch the first few episodes on TV, then if you like it you catch up online.ratings will keep falling until they close the gap. (In no way does this comment mean I watch TV shows online)

That’s just asking to get pirated, they should have the same international release date.

The final episode of Lost was shown at the same time in many countries, but I agree, it’s a rare event, and Lost was a much bigger show than SGU, SGA or SG1.