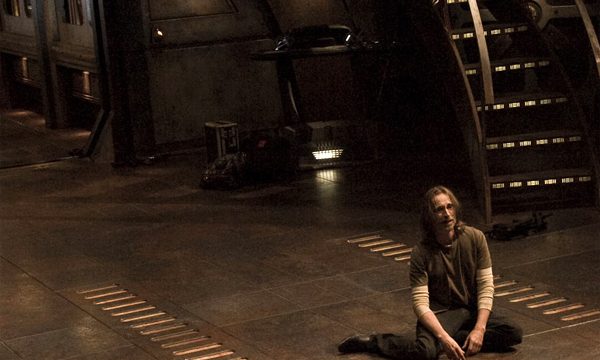 What if you could go home? Is the discovery of Destiny‘s mission important enough to keep you on the ship? That’s the question that the crew will face on tonight’s brand new episode of Stargate Universe. “Twin Destinies” airs tonight at 10/9c on Syfy!

We’ve been looking forward to this Brad Wright-penned hour since the first hints about the story were dropped last year. It’s definitely one not to miss! After the episode ends, point your browser to GateWorld Forum to discuss it with thousands of other Stargate fans!

All week long we’ll bring you GateWorld’s complete coverage of the episode, including the summary and transcript, podcast discussion (call (951) 262-1647 and share your reactions to “Twin Destinies”), Omnipedia updates, HD screencaps, and more.

Here’s your preview of the episode:

Excitement spreads through the ship as Eli believes he’s found a way to dial Earth. Dr. Rush has serious reservations about the plan and abandoning Destiny.

Eli may have found a way home, but Rush believes the plan could go catastrophically wrong. After experts on Earth decide in favor of Eli’s plan, Rush announces his intention to remain on the ship and calls for volunteers to stay with him.

In Canada: “Twin Destinies” airs this Tuesday at 10/9c on SPACE. Also don’t forget to stay tuned for INNERSPACE at 11 p.m. The behind-the-scenes show is sending off SGU with weekly tributes.

In the U.K.: SGU returns to Sky in May! The network has yet to announce an exact date, but we’ll report the date as soon as it is announced.

I would definitely stay behind and explore the universe. Because if you do it once, you can do it again. Plus Earth could reverse engineer what Eli did and send more people to the Destiny.

Gee, I wonder if it works and they get home.

It`s just sad.. When this show finaly takes off, they cancel it. A slow and boring first season killed it before it actually started.. Now i can`t wait for the next episode. Looks great!

i know right! SGU has gone from barely keeping my attention to keeping me on the edge of my seat. It is an absolute shame that the show is finished as soon as it gets really good. Makes me wonder if the show had the pace that started in 1.5 at the very beginning of the series, probably wouldn’t have lost many viewers. I still think SG1 and SGA are untouchable but the story and setting for SGU is really fantastic…. I dread the day when we no longer have a show about space exploration. It unfortunately looks like its… Read more »

Within the first 10 episodes of Season 1, I had pretty much written the show off. Then again, my opinion was jaded by the cancellation of Atlantis, which I quite enjoyed.

On the other hand, the 2nd Season has been greatly improved, with the only major flaw being the unneeded death of Ginn. Even if SGU were to get stellar ratings for it’s last remaining 9 episodes, I can pretty much guarantee, it’s a goner. And don’t even count on any SG1 or SGA movies, since they are actively auctioning off the props.

I don’t understand why SGU doesn’t just scream in the ratings. I just watched last week’s great episode again and it was just as good, if not even better the second time. Maybe they shouldn’t have spent so much time on character development in the first year, but even with that it was always good; and this second season is on such a high level, I just don’t understand why more haven’t found it. I can’t be that wrong about what is so very good.

Just finished watching tonights episode. I quite enjoyed it. Possibly as good as last weeks, if not better. The episode opened up quite a few possibilities, and also opened up a few questions.

Remains to be seen, if the show -can- be salvaged into a 3rd season, but i’m just not sure if the ratings will do.

Really is quite unfortunate that the first season was so miserable that it lost half the shows original audience. It seems that despite the fact that the show runners told critics of SGU season 1 where they could go, that in their haste they actually listened. Well, Que sera sera.

I’m shocked that we lost telford AGAIN! But is the other one still alive on earth now?

WOW! What an episode. Sadly as soon as it finished I remembered the cancellation, but hey what can you do. It sucks, but it’s the way it is. Robert Carlyle and David Blue were so good in this episode. There were some moments they had that just blew me away.

Now i`m 100% sure that episode 15 (Seizure) will be te best Stargate episode ever!

So there was 2 of both Rush and Telford, if I understood it correctly, too bad 1 of both died. That would have been an interesting concept, but if the showrunners pass on that, then I have no pity left for them.

Great ep.In my opinion even better than Deliverance!And yes,again we lose Telford,but the one on Earth is alive.I’m just not sure which one is on Earth,I’ll have to watch again,because the one on Earth told he needed to use the stones immediately as he found out what had happened and swap bodies,with someone,preferably himself.So the way he was acting around the other Rush,I wonder if Telford killed by that Rush already swaped bodies with his other self.That would mean that both Telford and Rush that died were their versions from the other timeline and our Telford’s back on Earth. All… Read more »

I think the last 2 episodes were beyond terrific as well as the growing plot! This show has finally found a purpose and it’s ashame so many people jumped ship without giving it a chance. My thoughts on the lost crew who went missing through the wormhole … they are either still stuck in the buffer like in episode 514 where the problem of dialing Earth’s hacked stargate DHD kept them from getting through 100% or the wormhole was diverted to another stargate when the connection was fluctuating. What are the chances they gated to Earth when the ancients built… Read more »

what an incredible episode. it is so much fun watching Robert Carlyle own every scene he’s in. I cannot wait to see where this show ends up going. heard there’s a possibility of SGU being turned into made for t.v. movies….? I’ll continue watching whether it’s a t.v. show or a movie or a comic or whatever. SGU is the ****, it’s so underrated.
what’re the chances of SGU being picked up by another network? I wish there was more I could do to keep the show going aside from just watching it….

Excellent episode. Im so mad this show is getting cancelled.