Browse: Home / 2011 / April / First trailer released for David Hewlett’s Rise of the Planet of the Apes 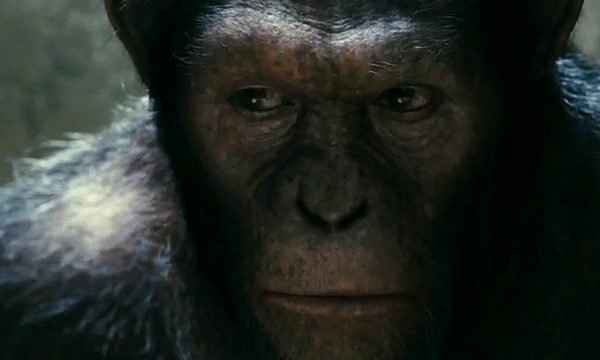 While 20th Century Fox’s return to the classic Planet of the Apes well this summer may star James Franco, to us it will always be David Hewlett’s Rise of the Planet of the Apes. That’s because the former Stargate Atlantis co-star has a part in the film.

This week the studio released the first official trailer for the movie, which also stars Andy Serkis (The Lord of the Rings) as Caesar — and co-stars the magic of Weta Digital’s visual effects. Watch the trailer (Hewlett-free, unfortunately) below.

“It was unbelievable,” Hewlett told TV Squad in a recent interview. “I have what I think is a really interesting part. I really hope that it sticks to the script. A film of that size has to go through so many people, but Rupert Wyatt, the director, is amazing. It’s just so great to see an indie film director who is all about the acting and the characters directing a movie that you’d think is just a giant special effects spectacle thing.

“If they stick to the script that I read and that we shot, I think it’ll be fantastic. It’s an action movie with a heart and a soul, and I so miss that these days.”

Rise of the Planet of the Apes opens in theaters on August 5.

This looks awesome! I can’t wait to see it! :D

i liked the part with the apes.

Sounds like a pretty depressing movie. Considering what it’s a prequel to.

Looks good and, as a prequel, it actually makes sense to do the movie. After all, how did the apes ‘out-evolve’ humans. Now we know… While worth watching for David Hewlett alone, should also be interesting to see how it all unfolds.

I wonder if this prequel will ignore the remake of “Planet Of The Apes” starring Mark Wahlberg from back in 2001.

So Hewlett will pay an ape? :)

Hoping McKay has a human role, I miss Rodney.

As for the film itself, well …. it looks pretty chock-full of fail to me.

I’ll probably have to see this, mostly because if Hewlett, but it may be good on its own. I think David’s character is “Hunsiker”. Maybe he’s a research doctor.

Yawn .. Another stupid computer animated summer movie. I’m sure it will make big money, but when are these film makers going to learn that filling in the movie with tons of animated scenes does not make it a better film. I’ll be skipping this one for sure.

Who couldn’t like apes taking over the world? I guess everyone has their own opinion.