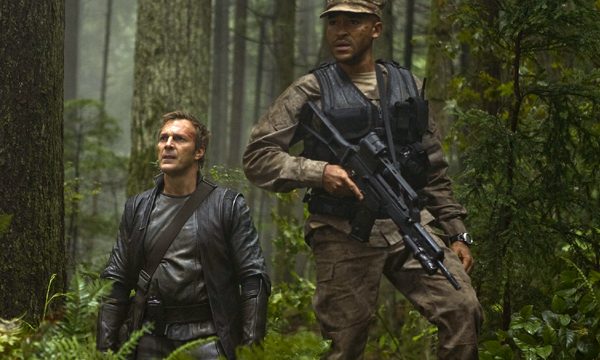 Ratings for Stargate Universe rose back over the threshold of 1 million live viewers last Monday night. “The Hunt” drew an estimated 1.02 million viewers (Live + Same Day) in the 10 p.m. time slot, the first episode to land back over 1 million since the mid-season premiere last month.

This is up an impressive 24 percent from the previous week’s big crossover episode, perhaps thanks in part to its lead-in show’s season finale.

Being Human also improved with its finale episode for the first season, with 1.666 million viewers in the 9 p.m. hour. That’s 16 percent better than the previous week, and just 15 percent off from the series premiere back in January.

Being Human has been renewed for a second season on Syfy.

We’re down to just four more episodes of Stargate Universe! Tune in to SGU at its new time when it moves up to 9 p.m. (8 Central) this Monday night on Syfy. Learn more about this week’s episode, “Common Descent,” over in our Season Two episode guide.

Of course it did better. They were away from the ship on a mission. People want to see new worlds and other species, not the same crew fighting amongst themselves every week.

@ hewittor: Really? I thought they wanted to see SGA..

They went to a different planet last week by the way, with David Hewlett to boot.

Exactly… those were my same thoughts as well when I was watching “The Hunt”.

When the “dark and gritty” label was being applied to this new version of our Stargate fan-chise, I envisioned more stories and settings akin to this one, and the ones which has come of late. More darker, nerve-grinding adventures on non-human/non-Ancient planets via the Stargate, and less body-swapping stone stories amid a gaggle of supposedly expert military and academic professionals.

(Don’t even get me started on the “wrong people at the wrong time” canard by the creative team. Oh, what could’ve been…)

@the destiny…then explain the reason because I’m puzzled. I’ve watched every episode. I like most of them…but why are people not watching?

And just because they don’t anymore doesn’t mean people know that. It takes 3 weeks to change people’s minds. Progression.

Lets face it, there will never be a perfect night for Stargate during the fall or spring, its at its best when its on in the summer/winter. Had SyFy kept it like that, its possible it might have done better. If it airs in the fall/spring it will always go against something like Castle or American Idol or whatever is a big hitter and people will be like “its a terrible night!” and if its on Fridays then people will be like “Friday’s the death slot!”

People see stargate as nothing more than a simple adventure show. when it tries to be more, they dont watch.

Even if The Hunt brought out more US viewers, the news of the effective cancellation of the entire Stargate franchise, will make those viewer numbers drop like a rock this week.

Furthermore, it’s not fair to base your entire decision on if a show should continue or not, on ONE country’s dumb-ass Nielsen Ratings system. There are OTHER countries out there who watch tv shows, and there are OTHER methods to access episodes such as Hulu/Itunes. These numbers don’t count for diddly squat.

@darkthunder
The way they figure out the ratings is absolutely rediculous. Stargate makes money because it has many loyal fans that will spend money on merchandise. The neilson ratings doesnt take that into consideration, it just ESTIMATES how many people watch the show in america. If the number is not high enough the show gets cancelled. That is why MGM needs to step in and save the franchise, because syfy obviously doesnt care about the franchise that brought them viewers for 15 years

@darkthunder – Syfy didn’t pick up season 3. Any of those channels in any of those countries could have picked up the tab. They didn’t because they couldn’t afford to because they weren’t getting the numbers in those countries either. @shermacidal – Stargate made money by stations paying them for airing rights. Syfy makes money based on how much they can sell commercial time for which is based on the Nielsen Ratings. Syfy wasn’t making money and so dropped the show. Stargate was no longer making money because Syfy was no longer willing to pay. Ergo, Stargate now makes no… Read more »

[…] latest episode ‘The Hunt‘ although I had difficulty winding down to sleep afterward.  Ratings really picked up for this episode. The Hunt aired 4/11/2011 in the US on […]