Browse: Home / 2011 / May / Announcing the Stargate Rewatch at GateWorld! 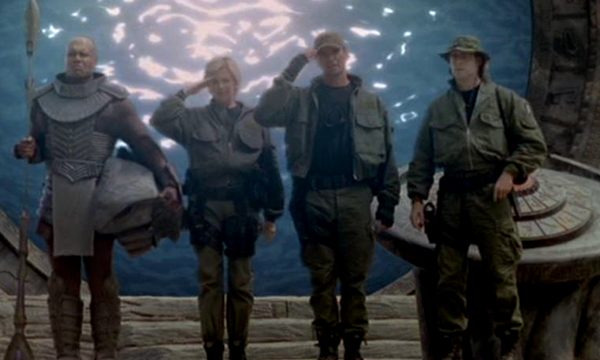 We’re going back through the gate! This week we’re thrilled to announce plans for the Stargate Rewatch, GateWorld’s plan to celebrate 17 seasons of Stargate through the rest of 2011 and 2012.  We want you to be a part of it!

Here’s the plan in a nutshell: Starting on August 1, we’re devoting one full month to each season of the Stargate franchise, encouraging fans all over the world to rewatch every episode of Stargate SG-1, Atlantis, and Universe.  It works out to about five episodes per week, so you can enjoy one episode every evening with your family, or sit down over the weekend for a marathon!

The more hardcore among us may watch episodes quite a bit faster, but this seems to be a good pace for most of us with a few spare hours to pop in a DVD during the week.

Whichever series or character is your favorite, let’s come together to celebrate a decade and a half of our favorite shows. The important part is to think of the Rewatch as a worldwide community event. Here’s what you can do while you are rewatching each of the series:

On GateWorld, we’ll be supporting the Rewatch program every week with special features, podcasts, and more.  We’re open to your ideas here, but so far we have these on the list:

We’ll be rewatching ten seasons of SG-1, five seasons of Atlantis, and two seasons of SGU in that order.  (No confusing overlapping of SG-1 and Atlantis, as they originally aired.)  That’s an amazing 354 episodes of great science fiction.

The goal is not just to give you an excuse to get some mileage out of your DVD collection, but to rewatch 17 seasons of Stargate together, on the same schedule, as a community of fans from around the world.

We hope this project, nearly a year and a half long, will be great for long-time fans ready to enjoy the entire Stargate story all over again, and also from newcomers who haven’t seen every series or every episode.  We hope that you’ll join us for the Stargate Rewatch through the rest of 2011 and all of 2012, finishing up 17 seasons of Stargate at the end of next year!

Bookmark GateWorld.net/Rewatch for the full plan and future updates on the Stargate Rewatch.

Are you ready to rewatch the entire Stargate saga? Post below and let us know you are on board!

1st :)
So are we starting with the original Children of the Gods or Final Cut?

I only have the Atlantis DVDs but I’ll find a place online (legal of course) to watch the SG1 eps, and I’m in too!

I am in! Thanks for helping to take the sting out of the current franchise limbo.

Luckily I have a month to get each DVD! haha

I’ll definitely be joining in. A great idea. And a good way to spend time till the next SG series (I’m way too optimistic after that finale.)

Great idea! Count me in!!

Darren/David/GateWorld Crew. This is a fantastic tribute to the show! I am truly excited with this idea and look forward to following the series from year 1 and listening to your podcasts. Finally, I am very VERY pleased that you guys are flying the SG flag for the future!

AWESOME idea,I’ve been planning on rewatching everything for a while now,so this definitely will get me started!I’m in and will spread the word!! I would also like If you would comment,if only shortly on each of the 5 episodes for each week on your podcast,not just on behind the scenes stuff,cause as I’ve understood,you’ll be rewatching the whole thing too!And you’ve never had podcast ep.analysis for those,except for the 5th Atlantis season and the overyall season by season thing of the rest of stargate.I just think it’d be cool if you two and possibly some guests,as well got involved with… Read more »

Consider me already signed up! I do this anyway all the time. I have to have my daily fix of Stargate. Whether it be in show or book form I gotta have it. I can’t seem to stick to doing it in order though I keep jumping around so I accept the challenge to do it from beginning to end. I love em all!

After we finish the episode stuff,we could do the books as well..that’s how you keep the franchise alive!

I’m in, very good idea Gateworld! And perhaps syfy will notice that Stargate is anything but dead.
Long live Stargate!

Sounds Awesome! Count me in. I started watching SG-1 from the beginning last October and am now to Episode 117 of Atlantis Season 1. Let’s see if I can start all over by August 1.

Might take part. Not sure what my situation will be in August.

I’m on SGA season 5 of my own Stargate rewatch that has taken years to hit this point due to lack of time. Hopefully I’ll be done by August but I’ll probably rewatch some of the better episodes as things hit those points.

Yeah sounds great! Look forward to it. Hopefully this will show TPTB there is there is still a strong fan interest in Stargate. Great idea Gateworld. :)

Fantastic, we’ve got the lot on dvd, going to start watching the lot again starting with the move Stargate, got to do that before SG-1.

For SG1 and Atlantis I’m in. Great idea!

I am soooooo ready for this!!!!

I’ll be rewatching the two Sg-1 movies as well, ark of truth after sg-1, and continuum after atlantis. So a movie between each series.

I’ve done this a couple of times (watched a DVD in a day) and went through two DVD players in the process, lol.

It’s a lot of fun to do, but I don’t know if I’m up to doing it again at present.

sounds great. might start on the 31st and enjoy a night of Spader and Russell

Cool! I just need to buy SGU seasons 1 and 2, and I’ll be good to go. Sound like fun! Great idea Darren! Stargate WILL go on! :)

A good idea! Look forward to it.

Just an FYI for everyone, if you have Netflix they have all of the shows (including all seasons of SG1, Atlantis, up to episode 2.16 of SGU, as well as the the two movie) available to watch instantly.

this should be great, maybe we could finally find out how many times Teal’c says ‘Indeed’

Sounds like fun! Are you including the original movie, and Continuum and The Ark of Truth with this rewatch?

This is going to be so fun! Great way to keep the community going.

cool idea if you are too cheap to buy the dvd boxsets.

Obviously i’ll start with the seed of it all (thanks Roland Emmerich for you one and only good movie) on blu-ray and then continue with CoTG: Final Cut, and then get into the real meat of the franchise (SG-1, Atlantis and Universe).

Are we watching the 3 shows in order of time line (Atlantis overlaps SG-1), or in order of SG-1, then Atlantis and then Universe?

What a fabulous idea! I love the idea of us coming together as a community of dedicated fans to share our love of Stargate and show our support for the franchise.

The S/J shippers started a full SG1 rewatch in April 2009 and we finish up S10 and the movies around the end of July. So perfect timing!

I will happily join the rewatch. Matter of fact, I’m already in the midst of a mini rewatch and am on Season 4.5 at the moment. :)

I was planning to rewatch SG1 anyway and my sis is already rewatching SGA. I’ll have to think about SGU, but for SG1 and SGA I am so there!

I’m on S3 of SG1 rewatch now, but will restart just to be a part of this. Great idea!

I’ll be watching the whole thing on Netflix. Really happy they’ve got the stream up for most of the episodes. Hoping they get the last 4 of SGU up soon.

Sounds great! But why don’t we start with the movie, and include the two movies that sort of make up SG-1 Season 11? I like the idea of an “indeed” count. I still can’t believe Stargate is just over. I’m 18, and have been watching Stargate for almost my entire life. I just hope this Rewatch is only going to bridge a temporary hiatus (perhaps until a smart network decides to wake up the Destiny sleepers.)

I was gonna do that anyway. Count me in !

Count me in! Sounds like a great way to start out my first year of graduate school :)

I agree with blindfoldedbiker…..let’s get the movies involved!! Amazing idea Gateworld, count me in!! Push it through your facebook page as well to get others involved in watching this AMAZING franchise…I tell anyone that will listen to watch any and all things stargate….:-)

Its a good idea, but I already did this after SGA was cancelled back in 08, and in between the void of waiting for the movies. This is just a good idea for those who want to wait, and let me tell ya, I’m tired of waiting! And when is MGM gonna step up and address SG fans in a press confrence or something? Ever since the wait for the movies we been getting information from Brad Wright or Mallozi. The right thing to do is give the fans some closure, not ten years from now, but right now or… Read more »

Hehe, I will need to buy SG-1 Seasons 8-10 and The Ark Of Truth but I will definitely take part :D Keen

SOMEBODY TAKE NOTE!
Will one of you rewatchers do a statistic tally for the Gateworld community during your rewatch?
How many people have died in the Stargate franchise?
And could somebody break down the death tally by Military, Civilian, Alien. SG-1,A,U.
I would do it myself but I am in Season 3 of my own rewatch.

Call me old fashioned, but I cringe everytime one of our troops dies on screen, so I was just curious that if the Stargate storyline was real, how it would compare to other wars in history.

Thats awesome!! SO August 1rst is when it kicks off. I come to this site everyday lol, and this is the best news yet, I pray everyday that I will see SG-1 New Movie is being filmed or SGU not canceled… But at least today its good news, Just one thing… Please dont include commercials in the episodes, if you guys have to I understand, cause we get to watch the best shows for free, but still if You can, make them commercial free. and if you absolulty have to add commercials please avoid the ones about laundry detergent and… Read more »

I mean come on people Wrestling? I know these comments are for the Rewatch, but I am bewildered… Wrestling??….. SGU > wrestling. How dumb do we have to be, before we appreciate the finer things on television, Hence Stargate, well sorry for preaching in the wrong forum. People watch the STARGATE REWATCH on gateworld and also join the free email (or get better service email for cheap) I love having my email at gateworld.net