Browse: Home / 2011 / May / First look at Robert Carlyle as Rumplestiltskin! 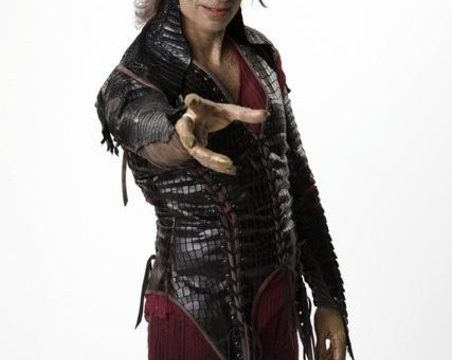 Stargate Universe star Robert Carlyle is going from dark corridors and Ancient computer consoles to smalltown America and fairy tales.  The actor has been confirmed as a full-time cast member on Once Upon A Time, the new fantasy series just picked up by ABC for its fall schedule.

Today ABC released the first trailer for the show, plus photos of the cast. Click on the images below to see the full-size version, and watch the video!

Carlyle plays the dual character of Mr. Gold in the real world of Storybrooke, and the infamous Rumplestiltskin in the world of fairy tales — both of whom appear in the trailer.

Check out the rest of the cast photos for the new show at HitFix.com. Once Upon A Time will air Sundays at 8 p.m. (7 Central) starting in the fall.

NEXT: Read ABC’s full description of the show

Oh yeah, this was totally a good move for Robert Carlyle…. seriously this is a rip off of Haven, only with fairy tale characters.

I’m not into fairy tales, especially for the formulaic “safe” shows of Sunday night, but I will definitely watch this for Robert Carlyle. He has an uncanny way of making evilness “sexy”.

I saw a bigger picture of Rumplestiltskin, and he looks amazing. Hopefully the writers won’t make him “all bad”, but rather kind of like Rush (or Ben of LOST), walking a thin line — making things interesting.

Didn’t know Tony Amendola was in it. I hope this is more successful than No Ordinary Family. My mom and I both gave that show a chance and enjoyed it and a lot of people I know enjoyed it as well. Network’s can’t keep on starting up these series and canceling them after one or two years because fans will get burned out after a while and not care to try anything new. Only reason I’m interested is because of the Stargate connections.

NoT my cup of tea, but ill tune in to at least check it out.

I’ll check it out for Robert Carlyle and Tony Amendola, probably won’t watch it regularly thouguh. I prefer Scifi to Fantasy

Wow, this actually looks amazing, I never thought that this will be such high quality production. And Robbie seems have a major full time role and very interesting one, nice! Makeup looks scary as I thought, but not so unrecognizable. And Jennifer Morrison from House is also there good (good looking actress who actually can act). This could turn out to be very good series. While I’m not in teenager sappy fairy tales (vampires, mummies, wherewolfes), I love these classic mashups between pure fairy tale land and these days. Yeah, formula is not unique, it is not sci-fi of course… Read more »

This looks interesting , but why should we keep investing out time in these TV shows when all they keep doing is cancelling them after only a short time. I will watch it , but i would rather have SGU back.

LOL
What are you doing bobby.

David Dowie? He scares me =/

Sorry but i’m not feeling this at all.. Seems really cheesy, bad acting.. Very much so aimed at a younger audience, would work on Nick along side The Sweet Life that my 10 year old brother would watch

I respect the guy for picking non ordinary roles.

On one hand, i have extremely high respects for Robert because i think he is a great actor, but i cant help but feeling sad that this might mean that SGU will have a harder time getting going again, if it ever does! however i do understand that he has a carrier to look after. Good luck man!

I think this looks really interesting. And for the record, it’s ABC that’s running it, not Syfy, so maybe it’ll last…lol.

I honestly would have been a bit more interested in the trailer if they didn’t have the “ridiculously epic” music in the background.

@galadriel77
It does look interesting and I’m going to give it a shot. I think they might give it a better chance on a cable network thou. I know that ABC can also be quick to pull a show just like any of the big network.

BTW, Chris Philips, who did the CGI for “Once Upon a Time” (and also worked for SGU too), said that the pilot will broadcast Sunday on ABC? https://twitter.com/#!/Chrispy2K01/status/70907464547176448 I checked my local TV listings but they show “Billboard music awards” rather than OUaT. Anyone else have info on this?

@ELQ
It will Broadcast Sunday this fall the show doesn’t start until the fall. It on ABC 2011/2012 fall schedule. You can go to ABC and look under shows or at TV.com, or TV by numbers and they will give you more information about time. I hope this helps.

What a waste of time but good for Carlye

He will forever be Dr. Nicholas Rush in my eyes!

i know this kinda sounds messed up but i dont really want the sgu cast to get any new acting jobs so that if and when whoever at mgm realizes they shot themselves in the foot and brings a conclusion on the entire cast would be willing to do it having no other options. and like i said i know it sounds messed up but they cant leave my all time favorite space franchise to end like this

Nice role for Mr C, but I want to know where I can see Julia Benson and her two friends on TV next year.

One commenter wrote, “i cant help but feeling sad that this might mean that SGU will have a harder time getting going again,” The thing is, though, SGU has no chance of every getting going again, so how could this series make it harder for SGU to do so? SGU is dead in the water. That’s obvious. There’s zero chance of it ever being resurrected.