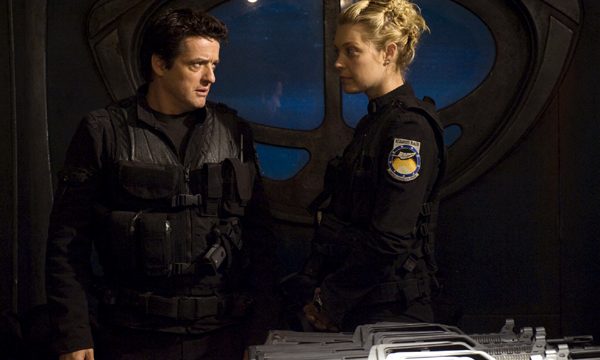 It was surely one of the most intense, edge-of-your-seat episodes of Stargate Universe — but did viewers tune in for the show’s penultimate installment?  The ratings are in.

SGU held close to the 1 million mark on Monday, with the penultimate episode “Blockade” dropping 9 percent to turn in an estimated viewership of 993,000 viewers (Live + Same Day).  In the important demographic of adults 18 to 49, the show earned a 0.3 rating.

Sanctuary also shed viewers at 10 p.m., losing 3 percent of last week’s audience. The show’s second week on Monday nights earned 838,000 viewers for “Metamorphosis,” with a paltry 0.2 rating in the demo.

The series retained 84 percent of its lead-in audience from Stargate, better than last week’s 79 and change.

The show has already been renewed for Season Four, so Sanctuary fans can breathe easy about how it is performing on Monday nights this spring.  But for comparison: Caprica‘s Tuesday night average in October was 822,500 viewers over four weeks, before Syfy cancelled it.

In the 9 p.m. hour on the big networks this week, ABC’s Dancing With the Stars conquered all with an average of 21.4 million viewers over two hours (9-10 p.m.).  CBS aired a repeat of Two and a Half Men at 9 p.m. to almost 7.7 million viewers, followed by Mike & Molly with just under 8.2 million.  NBC’s The Event drew 4.1 million, while on FOX an estimated 5.6 million tuned in for The Chicago Code.

And how did Urban Legends do on its first Friday night? As expected, considerably better. After premiering with a little over 400,000 viewers in the post-SGU slot now occupied by Sanctuary, the show turned in 1.307 million viewers when given the coveted post-wrestling spot. That’s a 211 percent improvement — but an 8 percent drop from what Sanctuary did in that time slot a week earlier.

Only one episode of Stargate Universe remains! Tune in Monday, May 9 for “Gauntlet,” the SGU series finale. You can read more about the episode in GateWorld’s Season Two episode guide.

Wow SyFy, looks like you’re learning the hard way what anyone with LOGIC could have told you two years ago!

Move a show around = disappearing audience.

Great quality without awareness from the public = failed experiment BY THE CHANNEL, NOT THE SHOW!

Just sucks that the great shows like Caprica and Universe were the proverbial guinea pigs by the SyFy Channel.

Fact: Setting a Stargate series in the Fall/Spring tv-season, on the busiest night(s) of the week for network television, is NOT a good thing.

Putting the show on a Summer/Winter schedule is far less competitive. But I guess we’ll never know if that would’ve fixed the ratings, will we?

sanctuary is the little fish in the big ocean now. not good.

Stargate was on Friday night for like 13 years. Why did they change that?

Agreed majorsal. Sanctuary was moved to a night with some very fierce competition. SGU and Sanctuary were up against Dancing with the Stars on ABC, House and Chicago Code on Fox, high-rated sitcoms on CBS, and Law and Order LA on NBC. On Tuesdays, it was against NCIS… next we’ll see SyFy moving shows to Wednesday to compete with American Idol…

I think SyFy needs to accept smaller numbers in the fall than in the summer. In the summer it WILL get higher numbers because there are fewer new shows on, especially genre shows so genre fans especially will be looking for new shows to watch. I think SyFy should accept 800,000-1 million viewers on Monday and Tuesday nights during primetime shows as the norm. Either that, or they should begin to take into account more DVR viewership on those nights. The Sanctuary audience IS still there, just not watching live. If SyFy does not accept this fact of fewer viewers… Read more »

Seriously how can they renew Sanctuary for another season with figures dropping to the same as SGU? They’ve given Sanctuary a chance, obviously up until season 4.. Why not for SGU

Really annoyed now, I like Sanctuary but SGU is a superior show in every sense!

I was just starting to get back into the show. Hadn’t seen any sad unending moments with sappy music for a while and the last episode even made me laugh. The writers caused the decay but I guess the channel poorly evaluated the scripts to come.

Ace_love, the show was renewed before going to the new slot. Obviously syfy is on a witch hunt for science-fiction shows.

I am Portuguese and I like many fans here of the stargate. SyFy what to do this to all fans of the world’s sg is horrible. SGU end so I’ll never see the SyFy channel.
can be to lose the entire audience, and back to be a channel as we like and we did the fans of SG SyFy be what today

SGU: Blockade … the Beginning of the End | Misty Midwest Mossiness

[…] ‘Epilogue,’ good action, good science and spots of humor that actually made me laugh.  Ratings reported Wednesday morning via Gateworld reveal a nine percent drop between ‘Epilogue’ and ‘Blockade.’ […]

Maybe it is time to to put a ban on sy-fi except for shows we won’t them to keep. If the ratings go down on their wasted nonscience-fiction shows, maybe thay will learn to listen to the fans.

It is truly amazing how many people watch wrestling. Anyway I really enjoyed Blockade and feel it might be the best, certainly one of, the best episode of SGU.
http://www.robotplunger.com/2011/05/now-that-is-good-tv/

SG-1 and SGA were wonderful serialize, she always gives us will of seeing again! I find much richer of content than the Days in the stars that are also wonderful!

Wow You and sgu are proud of being below 1 million when SGA got 1.7/1.8 for its 5th season and sgu got the 5 worse rates of entire SG franchise.There is no proudness in this only franchise ended by sgu :(

I think it was one of the best episodes yet, and it’s tragic that it’s coming to an end, but can’t say i’m surprised, the show started out horrible. and by the time, they finally understood what the fans wanted, they lost most of the viewers i guess. i live in europe so i can’t get syfy even if i wanted, but i could newer watch tv, gave it up 7 years ago, and haven’t looked back. The whole idea of not choosing what to watch and when, is just medieval.. the future is the internet, and sci-fi fans are… Read more »

“the show started out horrible. and by the time, they finally understood what the fans wanted, they lost most of the viewers i guess.”

@Lars Stjernstrom I agree that internet is the future and that sci-fi fans are more likely to adopt new technologies faster.But I definitely do not agree that tv is a sick horse ready to be put down just yet.In fact what we see nowdays is a merging of the internet and tv,as well as tv becoming much more interactive.On demand view is already a reality in US and Europe alike.So it’s not true that one cannot choose what to watch.Besides that,tv still is the most important marketing/sponsorship revenue tool absolutely unavoidable in getting a kind of quality programming that simply… Read more »

@Lars Stjernstrøm – The problem is that people like to eat. The production company has this crazy idea of paying the cast and crew to make the show. If only we could get rid of that nuisance and stare at a blank screen…

@mythos These people eat and produce a purely internet-based SF show.It isn’t much,but as a concept it is very important.And indicative of a future that’s coming whether you want to admit it,or not.It’s the evolution mythos..evolution,like the dinosaurs. http://bit.ly/fxzyj5 Pioneer One

@Jim – I’m often misunderstood in my stand on web-based shows. I’ve never said they’re not the future. What I’ve said is that they’re not the present. A show like SGU could never have handled it’s costs as a web-based show. They just couldn’t have made enough money. Advertisers pay several orders of magnitude more for television commercials than they do for web commercials. There’s 2 main reasons for this. 1) Competition – There’s way more websites than tv channels. The major networks fought long and hard to ensure that they owned stakes in most of the cable networks so… Read more »

@mythos Agreed. It’s just that I’ve moved on regarding SGU,so I was talking more generally and looking at things that are coming.Sure they aren’t here quite yet,but one needs to start somewhere and today,more than ever before(although that was the case always)ideas and tech support are being developed and moved at a geometrical rate. The way Microsoft and Apple initially had changed our world is becoming a slow pace history thing already,which is amazing when you think about it and whoever doesn’t hop on the train fast enough is gonna be left behind. Once again I wasn’t even talking about… Read more »

@mythos Well that’s ok,but I don’t think anybody ever commented on your SGU stance,while your last comment to that Larse guy had no specific mention of SGU in it,it was just a geheral critique of his stance that also did not include SGU,but was just overall internet future from his perspective. And since SGU has in fact always been,or at least is now removed from that equasion..the fact that something isn’t here yet,but even you admit is coming tomorrow..in a wider perspective means the same thing.And every smart businessman doesn’t think about what’s here today,but what’s gonna be here tomorrow.Unless… Read more »

Point being,old tv business is a matter of the 80’s and history books.TV world is rapidly changing as well as the news world,as well as intelligence gathering world and whoever does not understand that and adapt in time will become obsolete and left behind to rot.

@mythos No I haven’t misunderstood anything,I just commented on what you wrote to the guy..go over and read it again,if you don’t remember.

The guy was speaking about SF in general,no mention of SGU and you were talking about your outdated views and a need to eat,also no mention of SGU.
Don’t think anyone here has any inclination to read your mind @mythos

@Jim – From the original post that I commented on from @Lars Stjernstrøm:

“the future is the internet, and sci-fi fans are the most likely to adapt new technology fast, i think they should skip the middleman, and take the franchise directly to youtube or something similar. where it belongs, and not limited to sci-fi fans that lives in the states, and still watch tv;-)”

I’m not sure what other ‘franchise’ this could be considered to be about if not Stargate.

So again, I’m sorry you misunderstood.