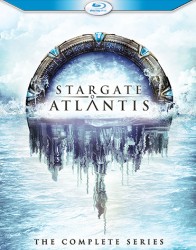 The lost city has arrived in full, high definition glory!

Today marks the release date for Stargate Atlantis: The Complete Series on Blu-ray in North America. The 20-disc set presents all five seasons and 20 episodes of the show, which ran on Syfy Channel from 2004 to 2009.

Also included are audio commentaries from the cast and crew on nearly every episode, plus all the same bonus featurettes that were previously released on the DVD edition.

It marks the first full-series Blu-ray release for the Stargate franchise. Previous Blu-ray options have been limited to the original Stargate film

, the two SG-1 movies, Season One of Stargate Universe, and a “Fan’s Choice” collection for Atlantis that included only three episodes — the two-hour premiere and the series finale.

We’re still awaiting word from MGM and Fox Home Entertainment on Blu-ray releases for Stargate SG-1, and for the second season (and/or complete series) of SGU. Though Atlantis and SGU were filmed with high def cameras, the earlier seasons of SG-1 would likely require a greater investment from the studio to remaster for a true HD experience.

Pick up Stargate Atlantis: The Complete Series on Blu-ray today, and join us for the Stargate Rewatch project starting next week!

I preordered mine when this was first announced. Should get it today via UPS.

PS I’m giving my old DVD set series to a friend who is a fan but is under hard times. I made his day. Lol.

This is great! :)
When do you guys think there might come a region two version? In four-five months?

It’s supposedly being released in the UK in September. The US set is region free, though, so it should be safe to import it if you can’t wait.

Pre-ordered mine over a month ago should be here by the end of the week!

I can’t wait for a 50% off Black Friday Amazon lightning deal!

I tried to enter the contest for it, but the forum “has an active policy of not allowing spammers.” What gives?

I preordered mine, hopefully it will be arriving on my doorstep shortly! Now all I need si a Blu-ray player.

Why wait for region B (European). It’s likely it costs less to purchase region A and get it shipped over here given the exchange rate. Every player has a hack which enables it multi-region. I use a program on the PC which allows me to play any region on bluray and DVD.

Got mine yesterday, it’s great! Very compact box and nice art. The quality of the video is perfect. The only thing I think could be better is the menu – it’s a simple static image. But I guess they didn’t have the budget for it. I’m happy anyway. Now I have 3 copies of SGA series and no space on the shelf left :) Patiently waiting for the SG-1 on blu-ray.

I can imaging Ronon being shown a Blu-ray by McKay, alongside the DVD of the same show. Ronon expresses a view that “they both look the same” at which point Rodney explains about 1080p etc. Teyla looks bemused.

Watch out for a collection of similar views to Ronon, in this discussion. Personally, I’ve just returned from Middle Earth 1080p so I thik a trip to the Pagasus Galaxy 1080p may be worthwhile, before my imminent trip to Naboo 1080p; I’m with McKay on this one!

I recently watched the episode “Vegas” which is on Disc 4 of Season 5, and at about 8.55 into the episode the picture breaks up into square pixels.