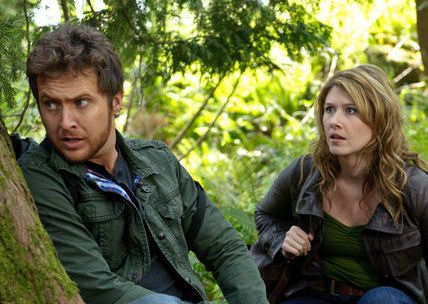 A.J. Buckley (CSI: NY, Supernatural) co-stars as a book editor who joins an archaeologist named Brooke Calvin (Staite) to try and prevent Armageddon. The pair must hunt down the mysterious author of a series of prophetic novels, who they find possesses a way to really see the future.

Watch a teaser scene from the movie below, and check out Newsarama for a transcript of a media interview in which the two actors recently participated.

Buckley and Staite will also be live tweeting during the movie’s East Coast broadcast, starting tonight at 9 p.m. (hashtag: #DoomsdayProphecy).

“As an actor I just look for really fun characters to play,” Staite said. “And a lot of really well written female characters happen to be in sci-fi. I mean it just sort of works out that way. But I do know a lot of actors that are kind of chomping at the bit to get in with the sci-fi fans, so to speak, because they really are so loyal. And as an actor this kind of stuff is fun to do. It’s fun to stretch…and go beyond the limits of your imagination and just sort of be in these crazy situations that you have to play out. And it’s fun. It’s always an adventure every day. And that’s why I like staying in this genre so much.”

Staite also said that her character in the film, Brooke, reminded her of Atlantis‘s Dr. Keller.  “She’s very much in her element when she’s at work,” she said. “When she’s on a dig, she’s totally relaxed. She’s very smart and she’s really in her element. But when she’s not and she’s in these crazy situations, she goes into panic mode. And that’s the way I am, too. I don’t deal with any kind of peril very well. And it’s always really important to me to play that as real as possible.

“I like that she’s not a hero. She’s a reluctant hero. And at the end of the day, she sort of has to step up to the plate and do what needs to be done. And I really wanted to put the realism, as much as possible. And so yes, I would say we react very similarly in certain situations.”

August is a big movie month for former Stargate Atlantis cast members, who appear in some high profile projects. In addition to Staite’s TV movie, David Hewlett has a role in the just-released box office hit Rise of the Planet of the Apes. But the biggest of all is Jason Momoa, who is about to make his big-screen debut in a big way as the headliner for Conan the Barbarian. It opens August 19 in the U.S. and Canada, and August 26 in the United Kingdom.

I can not handle watching the sCYFY Bad movie of the week.I like Jewel but I would have to be pretty baked to sit thru another Mansquito night.
When I think of their movies I just remember you can always put on Plan 9 From Outer Space !!!

I like jewel but is she that that desperate for work to be in syfy’s crappy B movies ? They are the worst ,id rather watch that cheezy Svengoolie on me-tv.

Seriously, how often does SyFy have try to destroy the world only to save it at the last moment?

That happens every sat nite!

She needs to have more loyalty to her fans…. they got screwed by Scifi on the Atlantis cancellation, and she should not do anything with them until they bring us an atlantis movie or 10…

The movie was the usual SyFy so-so, and Jewel was the only real redeeming value. Can’t wait for next Saturday’s Sharkoctopus vs Crocomonster movie (or whatever it is) …

They did destroy the world in one of those Syfy movies. The characters made the wrong choice at the last moment and poof — no more Earth.

Ekras, she has to continue on with her career. I don’t see the point of a boycott and limiting her options.

She needs to be more loyal to her fans? Absurd.

She is an actress and she gets work where she can. I seriously doubt she cares or feels the enough outrage about Atlantis’ cancellation to boycott an entire network for the sake of a show that isn’t ever coming back. Good for her to continue getting roles.

so when is the cancellation time?

It’s a Syfy Original Movie. Not a new series.

@far2005 syfy has to make money and when a show starts to cost more than it is currently making they have to cancel the show. Otherwise they are digging themselves a hole with negative effects. Which could mean other shows that are making money gets canceled too because the ones doing good are picking up the slack of said crappy and expensive show. Things cost money they aren’t doing charity work. take the time and see what it costs to maintain a show and tv channel.

Good for her, get a paycheck; bad for her…I do not watch that channel anymore and this show will never do her well on a resume..sorry a quick demise to SyFy Channel is what I pray for…

@Eagalis – They will actually cancel a show well before it starts actually losing them money. Networks have an expected earnings table for the various timeslots. If you drop below the expected earnings (or they have another show they think will do better with it), they’ll move a show. If a show drops below the minimum profit for any of their timeslots, the show goes away. While it’s not unheard of for a show to air that is actually losing money, it’s generally only because of lack of options. Most networks would actually rather can the show and sit on… Read more »

She’s just biding her time until they bring back Stargate Atlantis. I still have hope