Here at GateWorld, every once in awhile we get lucky enough to touch base with the cast members and crew of the different Stargate series more than once in a short period of time.  It doesn’t happen often, though, as our deadlines and lives outside the site (and their acting and production careers) very often interfere.  For every actor we get the chance to talk with frequently, there are many others that we just don’t get the chance to touch base with very often — regardless of how hard either side tries.  So when the opportunity arises, we seize it.  Such was the case this year with Stargate Atlantis‘ Major Lorne — Kavan Smith.

We caught up with the actor twice this year, at both the Vancouver and Chicago stops of the Creation Entertainment Official Stargate Convention tour — with the latter chat occurring mere days after the announcement of the cancellation of his current television series, Eureka.  In our extensive chat, Kavan Smith discusses the cancellations of both beloved genre shows, muses about his latest TV-movie roles, talks about why Felicia Day just might be the most talented genre actress on the planet currently, and more.

GateWorld:  Kavan, it’s good to talk to you again.

Kavan Smith:  Nice to talk to you again.

GW: It’s been a couple of years … three, actually. I think the last time that we talked to you was prior to the cancellation. It was Season Five.

GW: Let’s go back to that time and if you can, remember. How did the cast take the news at the time?

KS: I was there that day. I forget what episode we were shooting at the time, but I think everyone was in.

GW: “The Shrine,” I think, was the one that had just aired, so I’m guessing you were probably mid-way through the back half.

KS: Yeah, I guess so. It was one of those where everyone was there and I think we were shooting in a makeshift Wraith hallway or something. And in so doing, everyone was kind of ticked off because it’s a lot of synthetic latex on the walls and it’s pretty toxic after a while. So I think we were all in a bad mood to begin with and then lunch came along. We all went outside because it was a beautiful, sunny day.

Joe [Flanigan] was on his little skateboard thing, zooming around. David [Hewlett] and I were talking about something and then we ate. We’re all congregating back to the sound stage after lunch and Joe zips by on his skateboard and says “Yep. We got cancelled.” I was just like, “Really? How strange!” I just didn’t see it coming. I thought [we’d get] at least another season or two. 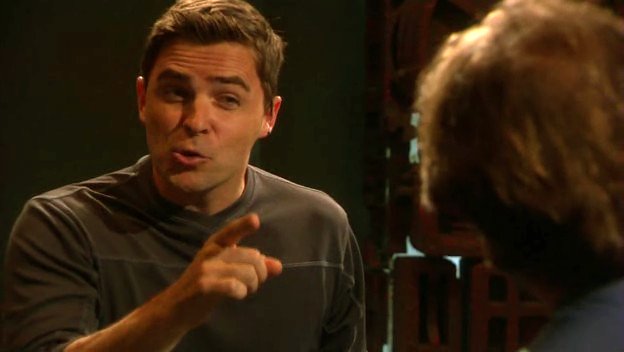 Lorne's role as a leader became a bit more prominent on Atlantis, especially in the final season.

GW: It was within a few days of the cancellation that they announced that they were green-lighting the beginning of production on doing an Atlantis movie, which we know now would never come to fruition.

KS: Yeah, that never came to fruition and I doubt it ever will in the future. And I’m sure the fans may not agree with this, but at this point it’s just kind of like, “Okay. We’ve just got to let it lie.” Let it stand as it is, I think.

GW: There’s a lot of fans who would disagree.

KS: Is there really? They want a last movie? Well, they’re probably right. What the hell do I know? [laughs]

GW: Let’s talk a minute about the growth of Lorne throughout the years. Were you satisfied with what was explored in the time that you did have? Is there anything you wish you could have seen?

KS: Well, no, I’m not satisfied. I don’t think anybody’s ever satisfied with where they go on a show and I wasn’t one of the major characters so they can only go so far with exploring Lorne.

GW: He did take a more prominent role toward the end.

KS: It was getting there, it was getting more interesting. I guess maybe the biggest disappointment for me about it getting canceled is things were just starting to get interesting for Lorne, I think. In the parameters that they had to work with, considering that they’ve got so many storylines of their five or six lead people that they have to work on — the fact that they did try and do some stuff — is testament enough to the fact that they had some loyalty to the character, so I was happy with that.

But, obviously, as an actor you really want to delve into something so you have your own backstory that you work on. But you have no idea if it has any relevance to what they’re thinking. You could play, “Okay, I’ve got seven kids, I’ve got a wife.” Then in the next episode you realize that they write that you’re an orphan and that you’re half Korean or something, and it just completely changes your backstory. [laughs]

So you couldn’t get too carried away with it.

GW: Since Atlantis ended, you’ve been recurring somewhat regularly on Eureka as “Deputy Andy 2.0,” a new version of a robotic character that previously was played by actor Ty Olsson. How easy was it to blend your style to his previous incarnation of the character?

KS: Well, it was a very late, last minute decision and I’ve heard all sorts of reasons as to why there was a split between Ty and the show and I don’t know. I’ve never talked to Ty about it and the show has never really discussed it, so I just heard rumors from the rest of the cast and I don’t know how much they know.

I didn’t know if I was walking into a hostile situation, or if they wanted me there, or if it was just a temporary thing. So when I first got there, [director] Matt Hastings sort of reassured me, “We’re really happy to have you here. Let’s just keep it simple.” And I was told that they didn’t want any robotics, just down to earth. But I hadn’t seen any of Ty’s stuff at that point, so I didn’t know what they wanted, exactly. 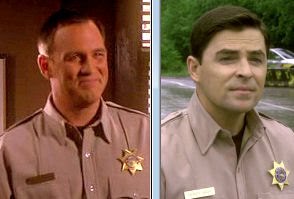 Colin [Ferguson] happened to be directing the first episode that I did and he wanted to put in a couple of twitches. I’m like, “Well, he’s the director, he’s the star of the show, I’ll do what he says,” and they were laughing with some of it, so I’m like, “Okay, so I guess they want a little bit of robot,” as opposed to what they’d originally said. Then the second episode, they had me back for another episode after that and did a day or two on that. And Matt took me aside and he’s like, “Yeah, I really love what you’re doing, but no robot. Like, no robot.” I’m like, “Okay. So, no robot-isms. I can live with that.”

That started a flood of phone calls from Los Angeles. Jaime [Paglia] called. Bruce [Miller] called. Todd [Sharp] called. And they’re all like, “Yeah, great job, love to have you on, no robot,” and I’m like “Okay, I got it now! There was a confusion in the first one. I got it, you want no robot!” And then they said, “We are going to send you an episode with Ty in it and we don’t want you to do what Ty’s doing but we want you to see sort of the down-homesiness of the character.”

So I watched it and I thought, “Okay, it’s not really what I saw or what I really wanted to do,” but I thought, “Maybe for this next episode I’ll blend it a little bit more so I can try and transition it to what I want to do.” So I did an episode or two where I tried to keep it a little truer to what Ty was doing, and then I just started making him my own. What I’m trying to do with him now — I see him as cross between Forrest Gump and a puppy dog. I just really want him to go that way and for the first couple of episodes I just kept getting the same comment, “No robot. Everybody loves it, no robot.”

I guess last year they shot 20 episodes and I ended up being in 11 or 12, so they really started increasing the role as they let me do my thing with it. They’re like, “Oh, okay, that’s funny, it works.” Then they started giving me a lot more stuff and they’ve actually really developed Deputy Andy towards the end of this current season. They’ve got some very funny stuff. It’s probably one of my favorite characters that I’ve ever played.

And we’ve been shooting Season Five this summer. I’m very heavily in the first three episodes and they’ve really embraced the Andy that I’ve tried to instill, that’s I’ve always seen. But it is weird taking over for somebody else. I’ve seen Ty around town a couple of times and I’m like, “Sorry, dude! I’ve got a family!”

Thanks for a great interview! I loved Kavan’s Lorne and Deputy Andy. Wish him well no matter what he does next.

It is a business, but it is also art. Art isn’t always profitable and it doesn’t have to be profitable to be worthwhile. Unfortunately too many of the business people aren’t artists and the art suffers as a result.

2 things I would’ve done differently in regards to SGA/SGU… #1: Keep SGA on the air for Season 6, as a lead-in for newcomer SGU. They would have the possibility of sharing characters, and possibly even storylines between the shows (much like SG1 did for SGA). #2: I would’ve cast Major Lorne, in a promoted role/rank as a Lt. Colonel Lorne on SGU, leader of the military contingent headed for Destiny (essentially replacing Col. Telford). With the difference, of actually sending the RIGHT guy to Destiny, and not the base commander. I would’ve rather seen Young in a role on… Read more »

@darkthunder: #1: Wasn’t MGM’s decision, but they could have put out a DVD movie before SGU came on to act as a segue. #2: The whole point was that Young was a flawed commander Telford too, they could have done something like that with Lorne but I don’t think fans would have liked it. Actually no. For all the noise fans & anti-fans make, they don’t make the ratings. Casual viewers do. Those would be the people that were watching Monk instead of SGA or Dancing with the Stars instead of SGU. Also, it wasn’t constant even on the *first*… Read more »